When the NRA Supported Gun Control

On May 20, 2000, the legendary actor and president of the National Rifle Association Charlton Heston stood before the podium at the organization’s 129th annual convention with a banner raised behind him featuring the America flag and the words “Vote Freedom.” As he concluded his address, Heston picked up a replica of a flintlock rifle, raised it over his head and declared, in his own dramatic fashion, that anyone who wanted to take his gun would have to pry it “from my cold, dead hands.”

This iconic moment has come to define the NRA, which is now America’s leading pro-gun advocacy group. As the group frames things in a new ad campaign, gun-control laws and politicians who support them are seen as an unconstitutional intrusion on the Second Amendment right to bear arms.

The NRA’s opposition to gun control, however, is only a few decades , according to Adam Winkler author of the book Gunfight: The Battle Over the Right to Bear Arms in America. “Historically,” writes Winkler, “the leadership of the NRA was more open-minded about gun control than someone familiar with the modern NRA might imagine.”

Not only did the NRA support gun control for much of the 20th century, its leadership in fact lobbied for and co-authored gun control legislation.

When the NRA was founded by two Union Civil War veterans and a former New York Times reporter in 1871, its purpose was to help improve the marksmanship of urban northerners whose inferiority to the superior marksmanship of their rural southern counterparts was believed to have prolonged the war. During this time, the Second Amendment was not the association’s central platform. Displayed at the NRA’s national headquarters was its motto, “Firearms Safety Education, Marksmanship Training, Shooting for Recreation.” The association was granted a charter and received $25,000 from New York State to purchase a firing range. It also maintained a longstanding relationship with the U.S. military, receiving surplus guns and sponsorships for shooting contest.

In the 1920s, the National Revolver Association, the arm of the NRA responsible for handgun training, proposed regulations later adopted by nine states, requiring a permit to carry a concealed weapon, five years additional prison time if the gun was used in a crime, a ban on gun sales to non-citizens, a one day waiting period between the purchase and receipt of a gun, and that records of gun sales be made available to police.

The 1930s crime spree of the Prohibition era, which still summons images of outlaws outfitted with machine guns, prompted President Franklin Roosevelt to make gun control a feature of the New Deal. The NRA assisted Roosevelt in drafting the 1934 National Firearms Act and the 1938 Gun Control Act, the first federal gun control laws. These laws placed heavy taxes and regulation requirements on firearms that were associated with crime, such as machine guns, sawed-off shotguns and silencers. Gun sellers and owners were required to register with the federal government and felons were banned from owning weapons. Not only was the legislation unanimously upheld by the Supreme Court in 1939, but Karl T. Frederick, the president of the NRA, testified before Congress stating, “I have never believed in the general practice of carrying weapons. I do not believe in the general promiscuous toting of guns. I think it should be sharply restricted and only under licenses.”

For the next 30 years, the NRA continued to support gun control. By the late 1960s a shift in the NRA platform was on the horizon.

On Nov. 22, 1963, President John F. Kennedy was assassinated by Lee Harvey Oswald. He shot the president with an Italian military surplus rifle purchased from a NRA mail-order advertisement. NRA Executive Vice-President Franklin Orth agreed at a congressional hearing that mail-order sales should be banned stating, “We do think that any sane American, who calls himself an American, can object to placing into this bill the instrument which killed the president of the United States.” The NRA also supported California’s Mulford Act of 1967, which had banned carrying loaded weapons in public in response to the Black Panther Party’s impromptu march on the State Capitol to protest gun control legislation on May 2, 1967.

The summer riots of 1967 and assassinations of Martin Luther King Jr. and Robert F. Kennedy in 1968 prompted Congress to reenact a version of the FDR-era gun control laws as the Gun Control Act of 1968. The act updated the law to include minimum age and serial number requirements, and extended the gun ban to include the mentally ill and drug addicts. In addition, it restricted the shipping of guns across state lines to collectors and federally licensed dealers and certain types of bullets could only be purchased with a show of ID. The NRA, however, blocked the most stringent part of the legislation, which mandated a national registry of all guns and a license for all gun carriers. In an interview in American Rifleman, Franklin Orth stated that despite portions of the law appearing “unduly restrictive, the measure as a whole appears to be one that the sportsmen of America can live with.”

A shift in the NRA’s platform occurred when in 1971 the Bureau of Alcohol, Tobacco, Firearms and Explosives, during a house raid, shot and paralyzed longtime NRA member Kenyon Ballew suspected of stockpiling illegal weapons. The NRA swiftly condemned the federal government. As Winkler points out, following the incident NRA board member and editor of New Hampshire’s Manchester Union Leader William Loeb referred to the federal agents as “Treasury Gestapo”; the association soon appropriated the language of the Panthers insisting that the Second Amendment protected individual gun rights.

For much of the 20th century, the NRA had lobbied and co-authored legislation that was similar to the modern legislative measures the association now characterizes as unconstitutional. But by the 1970s the NRA came to view attempts to enact gun-control laws as threats to the Second Amendment, a viewpoint strongly articulated at last week’s Republican National Convention by current NRA leader Chris Cox. Today’s NRA could be summed up with words uttered by the Black Panther Party 40 years earlier: “the gun is the only thing that will free us—gain us our liberation.”

Correction: The original version of this story was illustrated by an incorrect logo for the National Rife Association. It has since been updated. 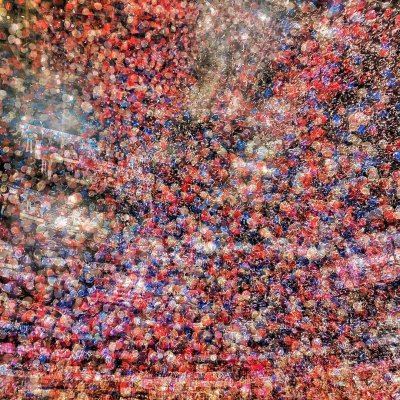 These Ethereal Photos Show the Intensity of Political Conventions
Next Up: Editor's Pick