Europe's Last Wild River Is About to Get Dammed

A boy slaps a horse to get it into the fast-moving waters of the Vjosa River to swim it to the other side in May 2016. The walls of the stalled Kalivac dam rise in the background, cut into the living rock of the surrounding hills.
John Wendle
By John Wendle/Kuta and Tirana, Albania

The paddlers slap the hulls of their candy colored kayaks with open palms, sending deep thunks bouncing off the walls of the Albanian prime minister’s offices in Tirana, the capital. Chants of “No dams!” join the thumping, as nearly a hundred residents of Kuta, an ancient village threatened with flooding by a proposed dam project on the Vjosa River, join the demonstration. Rok Rozman, a Slovenian Olympic rower, biologist and environmental campaigner, hoists a kayak covered in dozens of signatures protesting the dam, and heaves it over the heads of the police line protecting the building. Another kayaker catches it and tries to run it up the steps of the offices to place it on the prime minister’s doorstep, but is roughly stopped by police. The boat crashes to the ground and is kicked back amidst the demonstrators.

“This is the last big free flowing river [system] in Europe,” Rozman tells TIME, the day before the protest on May 20. Sitting with TIME in a lush garden near the Vjosa in southern Albania, he explains why the demonstration is needed. The river runs 272 km (169 miles) from the mountains of northern Greece through Albania, and is the last undammed river system in all of Europe outside of the scantly-populated Russian Arctic. “They are still trying to tell people that this is green energy, that they are helping the locals, saving the environment, but this is all that is left,” says Rozman.

Read More: Rediscovering Albania: A Photographer’s Tribute to His Homeland

At a time when dams are slowly being removed in the U.S., a surge of interest in renewable power has Balkan governments scrambling to harness the power of their rivers. The proposed 45-m (147 ft) Pocem dam near Kuta represents just one of nearly 1,400 new small and large hydroelectric projects planned across the Balkans, as countries like Albania, Serbia and Macedonia rush to cash in on a flood of investment in green energy. Globally, in 2015, both generating capacity and investment increased to an unprecedented level, reaching $286 billion, according to the Renewables Global Status Report. While the U.S. now gets around 13 percent of its energy from renewables, the E.U. sources 44 percent from green power, and demand continues to grow. But as development moves ahead, the economic, social and even environmental drawbacks are casting a black shadow over the green boom. In the EU, 25.4 percent of primary energy production comes from renewables, reports EuroStat. Of that, hydropower makes up 16.5 percent, wind provides 11.1 percent and solar accounts for 6.1 percent. In the decade from 2004-2014, renewable energy produced in the EU increased by 73.1 percent.

The wave of dam and small hydropower projects has received much of its funding from large multilateral development banks like the European Bank for Reconstruction and Development (EBRD) and the World Bank’s International Finance Corporation (IFC). And activists say those loans are sometimes based on shoddy environmental impact assessments. And in the case of some privately funded projects, concessions have been given as election year pork. Looking at the dates of past hydroelectric projects, Zamir Dedej, the director of the Albanian government’s National Agency of Protected Areas, says nearly all the projects were given as kickbacks for votes. “There is a lot of corruption inside of this process.”

Ironically, the last free flowing river in Europe could be destroyed in the scramble to benefit economically from efforts to slow climate change through renewable energy. Ecological concerns have been sidelined across the Balkans—not just on the Vjosa. Environmental impact assessments should have caused some of the river projects to be halted, “but unfortunately, they did a very bad job,” Dedej says, sitting in his small office at the end of a dimly lit corridor in the Environment Ministry. There is much at stake, as Balkan rivers are some of Europe’s last wild waterways. Of 35,000 km (21,747 miles) of Balkan rivers assessed by conservationist groups, 30 percent were found to be “pristine” and 50 percent were only “moderately modified.” These rivers are home to around 70 endemic species of fish, and the river basins are home to critically endangered species like the Balkan lynx.

But it is not just the environment that could suffer. Hydropower projects, specifically large dams, could end up bankrupting the delicate economies of the Balkans, says Bent Flyvbjerg, chair of Major Program Management at Oxford University’s Saïd Business School. Construction costs typically run more than 90 percent over than their budgets, says Flyvbjerg, based on his analysis of 245 large dam projects in 65 countries. “This is a very conservative number. The real exposure is much higher than that,” considering that construction debts are often in foreign currency, projects take a long time to deliver (more than eight years on average, and often more than a decade) and that currencies often fluctuate in fragile economies. “Even without considering environmental impacts, big dams are bad business,” says Flyvbjerg, “and if you include the environmental impacts, that conclusion would be even worse.”

Sheep feed in the delta of the Vjosa River, where it flows into Adriatic Sea. The area is rich farmland, fed with minerals and sediment from the free flowing Vjosa River. The area has mostly been drained and the Vjosa is used for irrigation, built during the Communist era.
John Wendle

Currently around 1,355 new hydroelectric projects are planned, under construction or completed. Of these, around 200 new projects have been finished and another 113 are under construction. The EBRD, European Investment Bank (EIB) and the IFC have made loans for 75 hydropower projects, including 30 directly affecting protected natural areas, totaling 818 million euros, says BankWatch, an industry watchdog focusing on Central and Eastern Europe. The EBRD has directly or indirectly financed between 16 and 19 projects in protected areas, the bank tells TIME, adding that the projects in protected areas have not had a significant impact. Those numbers were vetted by BankWatch. “Our analysis clearly shows that especially for the EBRD, but also the World Bank Group, financing hydropower projects in protected areas is the norm, not an exception,” said Bankwatch’s Pippa Gallop in a statement in December.

All the banks say they are interested in transparency and willing to work with BankWatch—while defending the need for further investment. “One shouldn’t forget where Albania came from,” says Christoph Denk, head of EBRD’s Albania office. “About 25 years ago this was more or less the North Korea of Europe,” he adds, speaking of the country’s isolationist communist dictatorship. Because Albania suffers from a serious trade deficit—exporting 27.1 percent as a proportion of its GDP, versus imports of 44.3 percent in 2015, according to the World Bank—Denk says that green energy generated cheaply for export “is a strength, and one that the country, I think, legitimately would pursue to utilize.” But he says it is up to the Albanian government to weigh whether an individual hydroelectric project is more important than saving a section of river and the livelihood of thousands of villagers. “These will have to be weighed in each instance against each other,” says Denk.

The IFC, which has invested €116 million in hydropower projects in Albania, estimates that the country only uses 30-35 percent of its hydropower potential, highlighting a “clear need for for Albania to increase its production and energy security.” And while both banks see a need for energy diversification across the Balkans, Denk, of EBRD, admits that poor rainfall can drop hydropower production from around 85 percent, to “much below” 50 percent, highlighting risks to the hydroelectric sector cause by fluctuations brought on by climate change. While clean energy projects spawned by climate change could generate needed foreign revenue for countries like Albania, rising temperatures pose a significant threat to the profitability of the projects, since a hotter atmosphere is projected to deplete water reserves in Mediterranean countries. “Climate change is a serious concern for a country like Albania and that needs to be taken into account when planning further renewable energy resources,” says Denk. “Does it mean one should stop all hydropower projects that are in the pipeline? No. But it is definitely something that needs to be taken into account.”

Further, Wolfgang Anzengruber, the head of Verbund, Austria’s largest energy provider, has said that developing more clean energy development projects in the Balkans no longer makes sense, since a swarm of solar and wind projects in Germany has glutted the European market with cheap, clean power, even as the region’s economy takes a hit post-Brexit. “It is not the time for extensive new projects in the power plant sector over the next few years. That would not be clever in a time with too much energy,” speaking out in March.

Flyvbjerg takes a similar view, but for different reasons. “We talk about smart scaling and dumb scaling. Big dams are dumb scaling. Wind farms are smart scaling,” he says. Projects like wind and solar farms are modularized and can be scaled to the exact amount needed or that is economical. But dams do not offer this option. “With big dams its an either/or,” he says. “It’s a binary decision. A dam that is 99 percent finished won’t work. Its got to be 100 percent finished. Whereas a wind turbine park that is 99 percent finished will work fine for you. It will give you 99 percent of what you would have gotten.”

Regardless, construction of the Pocem dam will probably go ahead, according to Dedej, from the environment ministry. He hopes a compromise can be found between the natural flow of the river and economic gain, but, he says, “How can this happen? We are still on level 0, even -1, at the moment.” But the people from Kuta, a village deeply rooting in agriculture, won’t stop fighting for their way of life. Standing on top of a high ridge overlooking the ancient stone hamlet, Taulant Hazizaj, who farms nearly 4,000 olive trees, sweeps his brawny weightlifter’s arm from the Vjosa over a rich bottomland of shaggy wheat fields, neat vineyards and pastures filled with sheep. “The fields are going to be completely filled up. You’re not going to be able to see the fields anymore,” he says, describing the extent of the reservoir that will form behind the Pocem dam. “What is a village without its fields? It will die.” 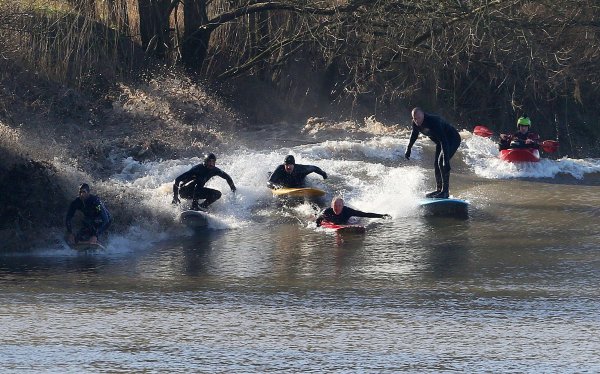 Watch People Surf on a River Thanks to Europe's 'Supertide'
Next Up: Editor's Pick