God Is a Neoliberal Centrist

Daniel José Camacho is a Masters of Divinity student at Duke Divinity School.

Tony Fratto, George W. Bush’s former Deputy Press Secretary, made a salient observation when tweeting about the DNC: He felt like he was “watching Democrats talk about America the way Republican candidates used to talk about America.” If the RNC featured conservative faith mobilized for the xenophobic hate spewing from Donald Trump, the DNC displayed an incredible amount of religious and secular faith justifying the militarism, imperialism, neoliberalism and American Exceptionalism of the Democratic Party. Once the hallmark of the Religious Right, a liberal version of these values have found a comfortable home in the centrist coalition being formed by the Democratic Party and its presidential nominee, Secretary Hillary Clinton.

Democrats rebutted Trump’s slogan “Make American Great” with the affirmation that “America is already great.” As the DNC featured speaker after speaker—from celebrities to experienced politicians including President Obama—we often heard different iterations of the same tune. America is the greatest country ever created and any individual can rise above difficult circumstances to make it. Vice President Biden went so far as to declare: “The 21st century is going to be the American century.”

We believe that American Exceptionalism, even in its liberal versions, is disastrously wrong. It erases the true history of this country, which includes not only freedom but racial oppression, genocide and elitism. With shallow optimism, this exceptionalism overlooks the ways in which things aren’t working out for ordinary people. Consider that outside of the DNC, poverty in Philadelphia is at 12.9 percent, which is around 200,000 people. Moreover, it justifies the overreach of the U.S. as a military police of the entire world and devalues non-American lives and the consequences they suffer as a result of our way of life. As Christians committed to justice, we are appalled that many liberal Christians can denounce racism and sexism within the GOP only to then be silent about the corporate and militaristic nationalism of the Democratic Party.

The point is not to demonize Democrats or those inclined, for various reasons, to vote for them. Instead, we are concerned about the force-fed fear and shame that is circulating to pressure people into supporting Clinton and the Democrats. The issue is not merely ideological purity but concrete consequences and commitment to policy. Our political and ethical imaginations shouldn’t be limited by what Democrats say is possible, especially given their recent track-record that includes deportations, mass incarcerations (disproportionately impacting people of color), harmful trade agreements (with TPP on the horizon), drone strikes (which often kill innocent civilians), the greatest weapons sales since WWII and hawkishness. When Trump declares the things that he wants to do, we are appalled and offended. But when Democrats have already done, are doing and will do similar things, we look the other way.

Some say that to follow one’s conscience and values by abstaining or voting either Independent or third-party technically is a vote for Trump. Yet, liberals easily excuse what is done under the Democratic administrations they support. Appalled by Republicans but captive to the Democrats, we are left with no leverage to pressure this corporate political party into delivering substantial change. Relying on selective Augustinianism and Niebuhrianism, some argue imperfect compromise is required along the lines that the Democrats define.

The potential election of the first U.S. woman president is significant just as the election of the first black president was. Nevertheless, symbolism alone is not enough. In addition, the desire for a woman president cannot blindly exempt all the ills that she has committed, especially regarding war, economic justice and environmental issues. We need to be aware of how symbols, identities and aspirational language can be propped up while divorced from structural change. As immigrants and people of color with ties to other motherlands, we know that we can be marginalized here and still be caught up in an imperial American project that compounds global oppression. Both can coexist. None of us are innocent or pure, whether we vote for Hillary Clinton or we don’t. Nevertheless, that shouldn’t stop us from working beyond mere inclusion towards the transformation of our society.

For progressive people of faith and values, our political vision can’t be blinded by nationalism and corporate media. Now, more than ever, we need to sustain grassroots movements and independent electoral politics, just as Michelle Alexander, Rosa Clemente and Mark Lewis Taylor have been writing about. We need to politically educate ourselves and follow independent media, which informs us on the policies and actions our government and politicians carry out.

Ultimately, more of the status quo will not defeat Trump or the right-wing reactionaries that will follow; it will only feed it. Rampant racism, sexism and xenophobia need to be denounced, but cannot be cause to neglect condemning Wall Street greed, drone strikes, imperialism and elite apathy for the struggles of working-class people.

We believe another world is possible. We hold out hope to work towards a deeper democracy and join Langston Hughes in saying, “Let America be America again—The land that never has been yet…” 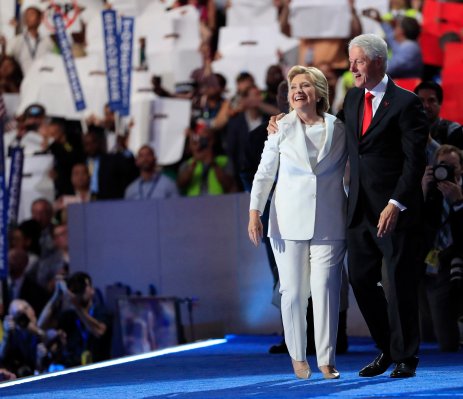 Hillary and Bill Clinton Just Turned Traditional Gender Roles Inside Out
Next Up: Editor's Pick