Amidst the joy, the tens of thousands of red, white, and blue balloons, confetti and raucous celebration in Philadelphia this week at the Democratic convention, there was an undertone of dissent.

Some Bernie Sanders supporters took to the streets and the slogans to protest his loss in the Democratic primary, even as Hillary Clinton claimed the nomination. What was supposed to be a unifying week for the party, culminating in the historic nomination of a woman for president, instead was beset by anguish and protests as Sanders’ faithful refused to accept Clinton’s victory.

“I think it’s fair to say that no one is more disappointed than I am,” Sanders said to the crowd, some of whom were in tears, as he officially threw his support behind Clinton.

In a week of protests, Sanders supporters wept, raged and marched against the machine, questioning Clinton’s nomination and calling for the political revolution to continue. They booed speakers in the convention hall and they held counter-press conferences outside.

Making matters worse, DNC emails were leaked that revealed top officials showing favoritism to Clinton, a suspicion many Sanders fans had held all along.

A majority of the Sanders delegates said they would support Clinton, and the disunity in the Wells Fargo Arena was more a vocal minority than a full-on rebellion. But dissatisfaction among Sanders delegates with the Democratic Party led to chanting even during Clinton’s speech and shouts of “no more war” when a Medal of Honor recipient spoke.

Nine out of ten Sanders supporters say they will support Clinton in the fall against Donald Trump. But some will sit out the election, others will vote for Green Party candidate Jill Stein, and many may be disillusioned by politics. 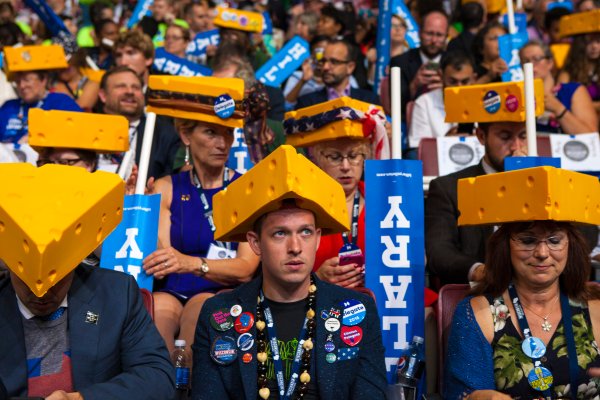 Watch Men Describe Why They Want to See a Female President
Next Up: Editor's Pick