Democrats Try on the Conservative Mantle Shed by the GOP

The Democratic party began its convention by unveiling one of the most liberal platforms in its history. The document embraces big government approaches to issues from banking to wages, climate to college tuition. Yet somehow, before leaving Philadelphia, the Democrats seized the conservative high ground, too.

This feat of political gymnastics could only have been possible with the cooperation of the Republicans, who surrendered the conservative position they have held for generations. Instead, the GOP in Cleveland took the most radical step by either party in generations by nominating Donald Trump for president.

“Conservative” and “radical” are opposite political concepts. Republicans have been losing track of this fact in the 21st century, as they’ve fallen under the sway of absolutist thinkers from Ayn Rand to the NRA.

Conservatives can be reformers, as the granddaddy of conservative thinking, 18th Century Irishman Edmund Burke made clear. But they cannot be radicals. At its core, the philosophy favors careful, measured steps, taken by ordered, established institutions—“prudence,” as the seminal conservative writer Russell Kirk would put it—over sweeping, centralized upheavals.

Love him or hate him, Trump is obviously not offering careful, measured steps. He says so himself. Though he avoids details in his campaign messages, he promises “huge” departures from business as usual. And he offers only scorn for the institutions of American civil society, which he often boils down to “stupid people” in positions of leadership.

What he offers instead is a highly centralized alternative: himself. America is badly off-track, Trump tells voters, because American civil society is not up to the hard tasks that face it. Unlike China, Russia, and even Mexico, the United States is no match for the problems of contemporary life, ranging from ISIS to health care.

But he, one great man, Donald J. Trump, can solve these problems.

Economist F. A. Hayek, another of the essential thinkers of conservative philosophy, would have rejected this superman thinking out of hand. The reason why conservatives should embrace free markets, Hayek wrote, was that the ideas of multitudes, each thinking for himself or herself, will add up to a deeper wisdom than any one person or central planning office could ever achieve. Wisdom is the product of crowds, and of generations. On the other hand, central authority leads—inevitably, Hayek would say—to tyranny.

The Trump candidacy is a radical approach to the future. This is true whether you believe that Trump has good ideas or not. Indeed, if he were not offering a radically different approach, he wouldn’t be sparking such an intense connection with the disaffected voters who form his core support.

Legions of Republican conservatives recognize this, and they’ve scorned the Trump campaign. Conservative columnist George Will announced he is leaving the GOP. Red State founder Erick Erickson recently noted that, “Donald Trump is neither a Republican nor a conservative.” Essayist Peter Wehner, explaining why Trump is no conservative, categorized him as “a demagogic figure who does not view himself as part of our constitutional system but rather as an alternative to it.”

Nominating Trump opened a wide lane for the Democrats, and while their own surging left wing would never allow them to fill it all, they occupied parts of it. President Obama’s Wednesday night speech rang notes of human fallibility and incremental change that would strike chords with any philosophical conservative. Hillary Clinton, in her acceptance speech, hinted at the essence of conservative order—the careful layering of generations of prudent action—when she spoke, quoting the musical Hamilton, of “planting seeds in a garden that you will never get to see.”

Or, less poetically, when she described the sort of leadership conservatives admire: “smarts, judgment, cool resolve and the precise and strategic application of power.”

Conservatism is about balance. Burke’s description of human rights is a model of the form. “Whatever each man can separately do, without trespassing upon others, he has a right to do for himself,” the great conservative wrote—words that will touch the hearts of American libertarians and free marketeers. But he adds, “and he has right to a fair portion of all which society, with its combinations of skill and force, can do in his favour.” Which covers at least part of the Democratic platform.

Whether the Republicans can find their way back to conservative principles may depend on whether Trump completes his takeover of the party. If he loses, they can pick up the pieces. If he wins, the embers of conservatism glowing in Philadelphia will all that they have to warm themselves for a while. 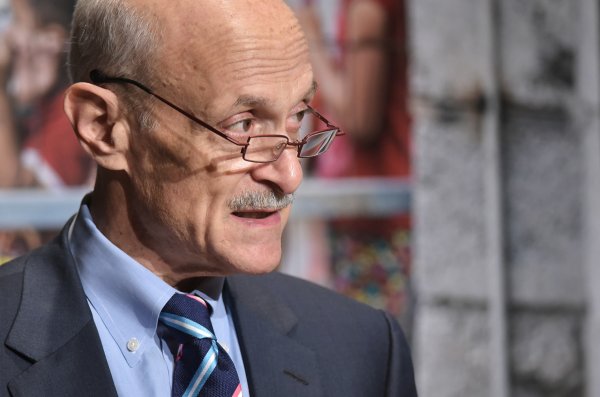 Bipartisan Security Experts: DNC Hack Is Attack on Democracy
Next Up: Editor's Pick