Watch Men Describe Why They Want to See a Female President

Some of the people most excited about electing a woman president happen to be men.

“As a woman, she’s better,” says Alfredo “Freddy” Blanco, a delegate from Houston. “Because I feel like they’re stronger. They have a lot of qualities. I come from one, and I know what I’m talking about.”

Blanco grew up in Mexico, and worked to elect Ann Richards as governor of Texas and Hillary Clinton in 2008. “Where I come from, woman is the core of the family,” he says. “She’s the one who puts everything together. A woman makes you feel like a man.” Without a woman, he says, he feels like “a general without a uniform.”

Other men described the importance of the milestone to women in their lives. Hillary delegate Frank Carlson is a middle-school teacher in a rural area of Texas. He says he sees a lot of female students who think being a homemaker is the only path available to them. “By her becoming a president, it’ll set a good role model for the girls, who will then turn around and maybe actually finish high school,” he says.

“What this means to my students is that they can grow up and do anything they want to do.” Carlson says it also inspires him personally as a gay man, since it allows him to imagine someone in the Oval Office who is not a straight man.

Some of youngest men at the Democratic convention appeared to be among the most excited about the milestone. Clinton has frequently discussed what she hopes her candidacy will mean to young girls, but young boys seem to be paying just as close attention.

“Boys should not feel that she’s turning her back to them, they should feel that she’s just including girls in the opportunities that boys have that girls may not have,” says Neo Kounalakis, 15. “It’s not like she has to take something away from boys to give to girls.”

His younger brother Eon, 14, is trying to appear serious but can barely keep the smile on his face. “It’s a new era in the world.” he says. “I’m going to be overwhelmed with support and happiness,” Neo says.

Write to Charlotte Alter at charlotte.alter@time.com and Arpita Aneja at arpita.aneja@time.com. 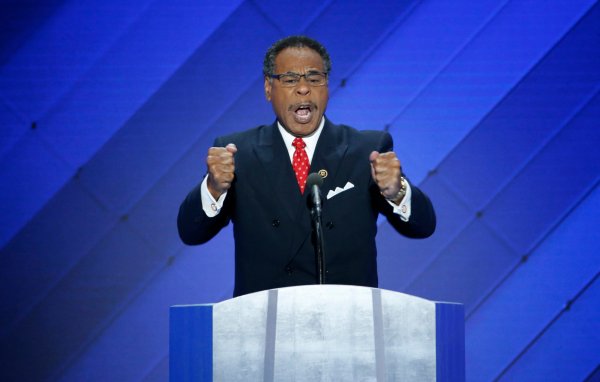