Review: Loaded with Jokes But Devoid of Wit, Suicide Squad Is Dead on Arrival

So much happens in David Ayer’s DC Comics adaptation Suicide Squad that by the end, it’s as if you’ve seen nothing. Ayer spends the first quarter of the picture introducing the characters, because there are tons: Viola Davis’ Amanda Waller is the head of a shady government operation who enlists the world’s most crazy-dangerous convicted felons to wipe out a bunch of treacherous something-or-others that have taken hold of Gotham. The allegedly colorful miscreants she assembles include, but are not limited to, Will Smith’s superassassin Deadshot, Jay Hernandez’s gangbanger pyromaniac Diablo and, most memorably, Margot Robbie’s Harley Quinn, the psychotic tootsie who used to be a brainy psychiatrist, Dr. Harleen Quinzel. Dr. Quinzel’s life changed forever when, as an Arkham Asylum shrink, she began treating the Joker (Jared Leto) and fell crazy in love with him. She busted him out of prison, and in a choppy flashback we see the pair living a dazzling life of sick romance and criminal escapades, until Batman (Ben Affleck, in an obligatory cameo) shows up and puts an end to it all by punching her in the face—smooth move, Bat Dude. The Joker escapes, but Harley doesn’t. When we first meet her, she’s executing an improvised slow-mo trapeze act in her Belle Reve Federal Penitentiary prison cage, a glowing blond wraith going all Cirque du Soleil to Lesley Gore’s ghostly anthem of self-determination “You Don’t Own Me.”

Harley Quinn’s entrance is the best moment in Suicide Squad. After that, you can leave. Robbie is a criminally appealing actress, likable in just about every way, but that intro aside, Suicide Squad doesn’t serve her well. It serves no one well, least of all its audience. Other actors wander through listlessly: As Colonel Rick Flag, one of Waller’s helpless henchmen, Joel Kinnaman struts about sullenly, desperately looking for something to do. Cara Delevingne (the model with the fabulous eyebrows, now launching a movie career) is June Moon, the ace scientist who now and then falls under the spell of the power-mad ancient crone Enchantress. It turns out that Enchantress—who speaks in a growly language and likes to strut around in a skimpy golden goddess-warrior outfit—is key to the horrors that have befallen the city, commanding an army of goons whose faceless heads are covered with throbbing black pustules.

TMI, I know. But all of Suicide Squad is TMI, a bunch of character stuff and plot stuff chopped and diced and tossed up on the screen with no regard for plot or logic or mood, as if we’re just not supposed to care about those things anymore. The script is loaded with jokes and devoid of wit; the movie’s overall tone is snickering and dour. The setting is your standard gloomy, grimy, grayed-out post-apocalyptic city, the same one we’ve seen hundreds of times before in hundreds of other movies. Now and then there’s a dash of color, especially when Leto’s Joker appears, with his silvery capped teeth and Day-Glo hair. Leto seems to be channeling, consciously or otherwise, Richard Widmark in the 1947 noir Kiss of Death—that’s the one where Widmark’s truly creepy-evil character pushes an old lady in a wheelchair down the stairs. But Leto is so textbook twitchy that he barely comes off as menacing. And his scenes with Robbie have no spark, no lunatic ardor. If you can’t strike a spark with R—obbie, something’s terribly wrong.

Suicide Squad moves fast, so fast that the characters barely have time to hate one another, let alone bond. But instead of making the picture more exciting, the cluttery blur of the editing flattens it out—it’s like watching helicopter blades whir for two hours. Writer-director Ayer (who wrote Training Day, and directed Fury and End of Watch) is also fond of using pop songs, some old and some not-so-old, as a kind of aural Epi-pen, a way of goosing a scene toward some semblance of excitement. But he tosses his cool vinyl collection around so indiscriminately that, after that one inspired Lesley Gore moment, none of it works. Hey, it’s Norman Greenbaum’s “Spirit in the Sky”! Wow, White Stripes’ “Seven Nation Army”—haven’t heard that one in a while! By the time he gets around to Etta James’ stupendous “I’d Rather Go Blind,” throwing it away as background music in a bar scene, it’s well past time to turn off the ADD jukebox. Click. 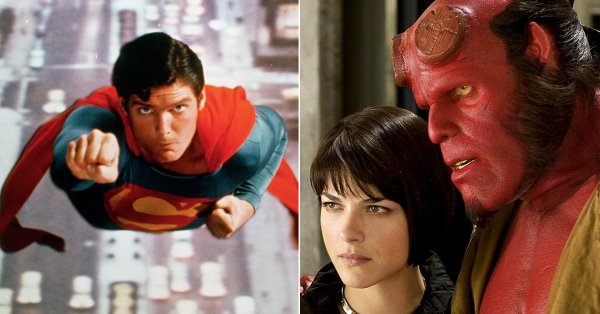 10 Underrated Comic Book Movies You Need to Watch
Next Up: Editor's Pick