Pope Francis walks through the gate of the former Nazi German death camp of Auschwitz in Oswiecim, Poland on Friday, July 29, 2016.
Gregorio Borgia—AP
By Tara John

Pope Francis visited the Nazi-German concentration camp of Auschwitz in Poland to pay tribute to 1.5 million people, mostly Jews, who lost their lives there in World War 2.

The Pope did not make public remarks at the camp, preferring to pray in silence. But he wrote a short message in the Auschwitz commemorative book, Reuters reports. “Lord, have mercy on your people. Lord, forgiveness for so much cruelty” wrote the Pope in his native Spanish.

Friday’s trip is the Pope’s first-ever visit to the notorious Nazi camp. The 79-year-old spoke to 12 Auschwitz survivors and visited various cells that held prisoners, one of which us where Franciscan monk Maksymilian Kolbe died by lethal injection in 1941.

The monk had offered his life in place place of one prisoner, Franciszek Gajowniczek, whom camp handlers had picked to die of starvation. Gajowniczek survived the war and Kolbe was later made a saint in 1982.

The Pope also visited Birkenau, a part of the camp where the majority of killings were committed in gas chambers. The trip marks the Pontiff’s third day in Poland. 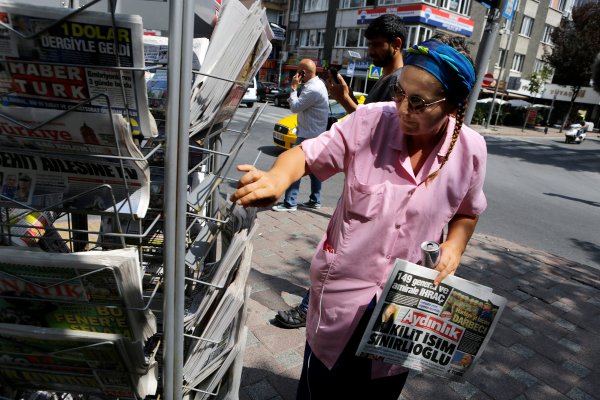 Turkey's President Cracks Down on Media After Uprising
Next Up: Editor's Pick