Chinese Tourists Love Tibet. But Does Tibet Love Them Back?

The mountains and grasslands of the Tibetan Plateau are seen from the air in the Yushu Tibetan Autonomous Prefecture of Qinghai province on May 24, 2016 in Yushu, China.
Kevin Frayer—Getty Images
By Hannah Beech / Beijing

This week, Tungri Dukmokyi accompanied a group of Chinese as they breathed in the crystalline air of the Tibetan plateau. Guided by their Tibetan teacher, the members of China’s Han ethnic majority lit yak-butter lamps in Tibetan monasteries and practiced Tibetan phrases she had taught them back in Beijing. “Many Han people want to learn about Tibet because they have realized that making money doesn’t buy you happiness,” says Dukmokyi, who runs the Duk Mo Tibetan Training Center in the Chinese capital. “We can give them inner peace.”

Tibet’s allure as an otherworldly retreat from modern-day materialism appeals not only to Western seekers but to stressed out Chinese as well. More than 20 million Chinese took holidays in the Tibetan Autonomous Region (TAR) last year, taking advantage of an infrastructure boom that has crisscrossed once remote areas with new roads and railways. As part of China’s spiritual flowering, others have made pilgrimages to Tibetan monasteries to study with lamas, who boast hundreds of thousands of followers on Chinese social media. “I want Tibetan culture,” says Dukmokyi, “to give people happiness.”

Read More: How and Why the Dalai Lama Left Tibet

Yet many Chinese tourists remain unaware of the dissatisfaction that has infected Tibetan regions, particularly in the wake of deadly protests in 2008. Schooled in a government narrative that hails the People’s Republic’s role in transforming a feudal state into a tourist mecca, Chinese holiday-makers are shielded from news that more than 140 Tibetans have set themselves on fire to protest Chinese rule and to call for the return of the Dalai Lama, the exiled Tibetan spiritual leader.

Even as the TAR’s economy has expanded — 10.6% growth in the first half of 2016, the fastest in all of China, according to government figures — so have restrictions on local worship and culture. Even successful Tibetans are not immune. Last month, Tibetan director Pema Tseden, who was a judge at a Shanghai film festival and hardly a political figure, was hospitalized after a police detention left him with serious injuries. The authorities contended that he had disturbed social order at the airport in the capital of Qinghai, a northwestern province with a large Tibetan population. Tseden’s supporters, both Han and Tibetan, remain skeptical and wonder whether his ordeal was simply the result of his ethnicity. “No matter what happened, I never saw him get angry or emotional or quarrel with other people,” says a Han film producer friend. “This issue is so sensitive.”

In recent days, Tibetan exile groups have decried what they say is the ongoing destruction of one of the world’s largest centers of Buddhist learning. Located in Sertar county, an ethnically Tibetan part of Sichuan province, Larung Gar has welcomed Tibetan and Han students alike to a warren of cabins carved into a hillside. Local officials quoted in state media said the demolition work at the academy, which began on July 21, was merely a renovation project designed to relieve an overcrowded community in danger of being ravaged by fire. Larung Gar was cleaned up once before in 2001 but its popularity has surged since then.

Overseas Tibetan groups, however, contest that thousands of monks and nuns will be forced to leave Larung Gar under the pretense of a registration campaign. “The demolition at Larung Gar is clearly nothing to do with overcrowding,” said Eleanor Byrne-Rosengren, director of the London-based Free Tibet, in a statement. “It is just another tactic in China’s attempt to subvert the influence of Buddhism in Tibet.”

Whatever the truth, news about the demolitions has spread in domestic online chatrooms dedicated to trekking and spiritual adventures. “Sertar is currently being demolished for reasons not to be discussed,” said the social-media feed of one outdoor club based in the southwestern city of Chengdu. “It’s supposed to be restored in early August to its original style but that is certainly unrealistic. While the area is still full of color, please go to take a last look.”

Read More: Inside the Quiet Lives of China’s Disappearing Tibetan Nomads
For her part, Dukmokyi said she knows nothing about the situation at Larung Gar. Indeed, she shies away from sensitive subjects. “I have two rules for my classes,” she says. “One is that we focus only on Tibetan culture and the other is that we don’t talk about politics.” Han interest in Tibetan language is a recent phenomenon, Dukmokyi says. The daughter of farmers from Ngaba, one of the most restive regions on the Tibetan plateau, relies on a Tibetan-English textbook to help with her lesson plans. (In Chinese universities, Tibetan language classes are reserved for native students, not those wishing to learn it as a foreign language.)

Dukmokyi’s students meet in her brightly furnished home in Beijing, which is decorated with Tibetan rugs and mandalas. Unlike in many private Tibetan residences, there are no pictures in her living room of the Dalai Lama, who is vilified by Beijing. But even Dukmokyi admits that tourism, however much it has benefited the local economy, has changed her native Ngaba. Some unscrupulous Han guides put on Tibetan costumes and sell fake trinkets. “Before, my home was covered in grasslands and flowers,” she says. “But now, everything is paved in cement.” 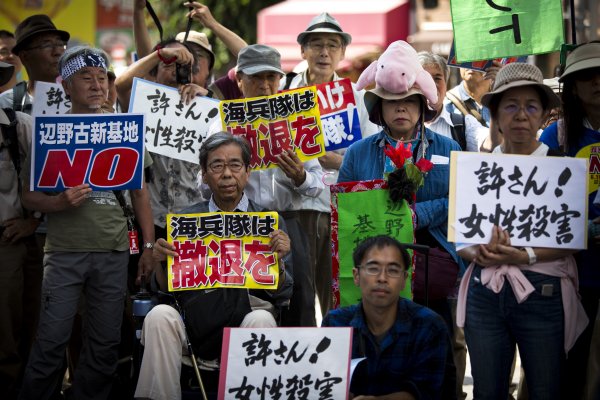 U.S. to Return Land from Okinawa to Japan
Next Up: Editor's Pick