Will the United Kingdom Have a Snap Election This Year?

Theresa May, the U.K.’s new prime minister, has built up a huge poll lead for her Conservative Party over the Labour opposition barely two weeks after entering Number 10 Downing Street.

In a YouGov poll conducted over July 25 and 26, 40% said they would vote Conservative and 28% for Labour. The rightwing UKIP would receive 13% and the center-left Liberal Democrats 8%. The 12-point gap between the two largest parties is the biggest advantage the Conservatives have held since May’s predecessor, David Cameron, took power more than six years ago.

The poll signals a sense of confidence in May’s leadership, but the wide margin is just as reflective of the crisis in the Labour Party. The hard-left leader Jeremy Corbyn, still extraordinarily popular among Labour members, does not have the support of the vast majority of Labour’s Members of Parliament (MPs). Owen Smith, who recently quit the shadow cabinet, is now challenging Corbyn in a leadership contest less than a year after the 67-year-old took the helm. The fractured party appears to be in no position to fight a general election.

As a result, many Conservative activists think May should call a snap general election to take advantage of Labour’s internal divisions, and increase the party’s Parliamentary lead over Labour and other opposition parties. Ed Costelloe, chairman of Grassroots Conservatives, has argued May would “win big time” in a fresh election.

The case is compelling, despite May’s insistence that she will not call an election so soon after the 2015 vote. However, the nature of the U.K.’s political system makes this difficult, leaving speculation over whether May could, should, or would hold an election over the coming six-to-12 months.

Could May hold an election?

She doesn’t need to. Tim Bale, a politics professor at Queen Mary University in London, points out May “constitutionally doesn’t need a personal mandate” — she succeeded David Cameron after the “Brexit” vote as leader of a party that won power a little over a year ago and has a mandate until 2020. However, Bale adds that winning an election as leader would stamp May’s authority over her party and Government.

But that’s not as easy as just dissolving parliament and calling for a vote. Under recent changes to the U.K.’s electoral system, Parliaments last for a fixed term of five years — meaning May could hold an election earlier than 2020 under only two circumstances.

The first would be for two-thirds of M.P.s to agree to an early election, which would require around 100 MPs from other parties to join the Conservatives. The second would be for May to engineer a simple majority vote of no confidence in her own Government. The latter would be not just embarrassing but risky, because there is a 14-day window for others to try and form a Government before an election is then called.

Winning either vote would be tricky. Although a general election loss might be the only way to dislodge Corbyn from the Labour Party leadership, many MPs are frightened by the prospect of losing their seats and would try to engineer ways of avoiding a fresh national poll. “Nobody in Labour really wants it,” says one senior Labour MP, “except masochists who are in a desperate state, who think, if Corbyn beats Smith, that a scorched earth policy is the only way of resolving our problems, to bottom out in an election – but we’d lose 50-60 seats.”

May could make a case to the country that is hard for her opposition parties to refuse. Stephen Kinnock MP, who has been particularly critical of Corbyn, believes May will use the terms of the deal she negotiates for the U.K.’s exit of the E.U. as a pretext for calling a snap election if Corbyn is still in charge of his party.

“This would give May the constitutional justification she needs,” he says, predicting it would be a wipeout for Labour under the current circumstances. “We currently have 95 MPs in Conservative/Labour marginal seats, where the majority is less than 5,000 votes. The Tories would win every one of them if we were to go into the general election with Corbyn as our leader.”

Either way it would be very difficult for Labour MPs to argue against a new election. Says the senior Labour MP: “Publicly, if asked, the Opposition has to say ‘yes’ to a general election – as soon as you say ‘no’, you’re suggesting you don’t want to be in Government, which ends your purpose as an Opposition.”

Should May hold an election?

The numbers make sense. The Conservative Party’s majority from last year’s general election is, in effect, 12 seats – a wafer-thin margin that could easily see government policy defeated if there is just a small rebellion.

But many Conservative lawmakers agree with May that an election would just create fresh instability at a time when the government needs to be calming the financial markets in the wake of the Brexit vote. “I understand the temptation of the political advantage, but the Government needs to provide stability,” Mark Spencer, an assistant Government whip, tells TIME. “We need to grind out the best possible deal for Brexit and at the 2020 general election we can show that we got a good deal and have a strong economy and say to the electorate give us another five years.”

Dominic Raab, a former Conservative justice minister who played a leading role in the campaign to leave the E.U., says: “I doubt the country wants an election, and we don’t need one to deliver on either Brexit or our manifesto.”

However Alistair Carmichael, a Liberal Democrat who served in the Cabinet as Secretary of State for Scotland when his party governed in coalition with the Conservatives in 2010-15, says the E.U. vote has changed everything — and the terms of Britain’s departure need to be decided at the ballot box.

“There should be an election,” he says. “The Government can only negotiate Brexit with a mandate from the electorate to negotiate. The terms of Brexit were not discussed at the general election last year – whether we would be outside the single market, for example – and barely during the referendum. It’s needed.”

Would May hold an election?

Paul Goodman, who edits the ConservativeHome website, argues that there is “a good case on paper” for an election. He points out that May has seemingly disowned much of the economic program that Cameron and his chancellor, George Osborne, ran in 2010-15 and then advocated in the Conservative manifesto last year.

But sources close to May say she is adamant that there will be no vote, and frustrated that speculation continues to swirl when she has been “clear” about her intentions. If the gap between Conservatives and the Labour Party continues to grow, however, the calls for a snap election will grow louder and frustration sharper at a perceived missed opportunity.

At some point, the temptation to secure a large government majority may become too great to resist. 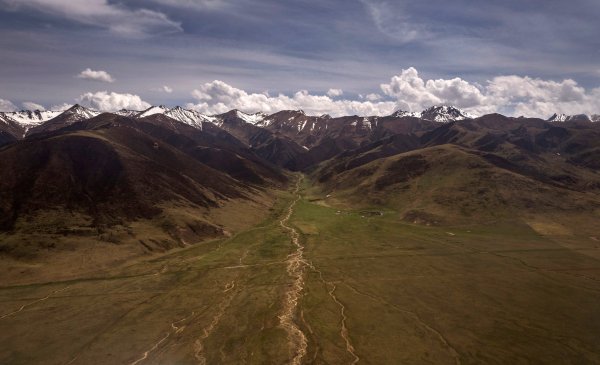 Chinese Tourists Love Tibet. But Does Tibet Love Them Back?
Next Up: Editor's Pick