A small group of Bernie Sanders delegates abandoned a plan to walk out of the convention during Hillary Clinton’s speech on Thursday, instead chanting intermittently and holding protest signs as she accepted the Democratic nomination.

Some scattered Sanders delegates, unhappy over his defeat in the primary, had planned to leave the Well Fargo Arena in protest during Clinton’s speech on Thursday night. But they didn’t.

“It never came together really,” said Greg Schaffer, a Sanders delegate from Pennsylvania who held up a sign that said, “No More Wars.” Schaffer said he and his cohorts stayed in the hall out of a desire to “be respectful of what this week means to certain people, especially women.”

Instead, Sanders supporters periodically chanted and waved signs throughout Clinton’s speech, seeking to interrupt her as she accepted the Democratic Party’s nomination. They chanted “no more war,” and other slogans and held placards that said “No TPP” and “Walk the Walk.”

Many Sanders delegates were exhausted after four days of protest in Philadelphia and others calmed by Sanders’ repeated pleas for party unity. In text messages, speeches and breakfasts throughout the convention, Sanders implored his supporters to help Clinton defeat Donald Trump.

In a text message to his supporters shortly before Clinton was scheduled to speak, the Sanders campaign urged supporters to refrain from protest. “On Monday when Bernie gave his speech to the Democratic Convention, Secretary Clinton’s campaign asked her supporters to be respectful and they were,” the text message read. “As a courtesy to Bernie, our campaign would greatly appreciate it if you would extend the same respect during Secretary Clinton’s speech.”

The walkout was not widely organized and only a small minority of Sanders delegates even knew that it was planned.

Still, before the speech began, many delegates appeared prepared to disrupt the historic moment in other ways. Scores of supporters wore glow-in-the-dark T-shirts, held protest signs and shouted from the Oregon, California and other state delegations, as well as the upper-level seats.

The Colorado delegation designed the T-shirts, according to several delegates. The $11 union-made T-shirts were designed so they would be visible during the prime-time speeches and featured a dove representing peace and the words “Enough Is Enough.”

Many objected to the Sanders’ delegates heckling. “I think they’re completely divisive,” says Peter Noris, who supported Sanders. “All they’re doing is helping Donald Trump.” Noris says he was a vote counter on the 2000 Florida recount in which votes for Ralph Nader may have thrown the election to George W. Bush. “I’d hate to go through that again,” he said.

“Most of us are adults and we understand we’re not getting everything we want,” said Beverly Bacon of Virginia. “There’s a lot we can do after the convention but for purpose of today, there’s nothing they could accomplish. I think it reflects badly on them.”

The California delegation, which has consistently been one of the more disruptive delegations, held a vote on Thursday morning over a walkout and decided against it. Instead, they planned possible chants about fracking and war during the speech.

Even among the Sanders protesters, there were apologists.

“We didn’t want to disrupt her,” says Doug Bullock, a New York Sanders delegate. “We just wanted to chant ‘Get it done!’” 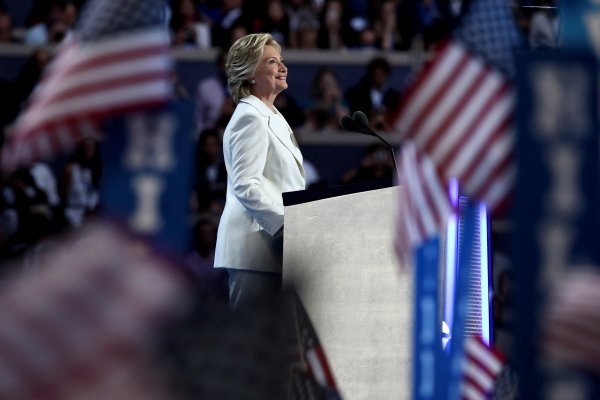 Read Hillary Clinton's Historic Speech at the Democratic Convention
Next Up: Editor's Pick