Chelsea Clinton Introduces Her Mom to the Democratic Convention

After three nights of speeches by politicians and everyday Americans whose lives have been touched by the Democratic presidential nominee, delegates heard from the one person whose life Hillary Clinton has most shaped.

Chelsea Clinton took the stage at the Democratic National Convention on Thursday to mark a deeply personal moment in history. Her mother, the former Secretary of State, was due to become the first woman to accept a party’s nomination in the nation’s history. And it was her job to introduce her.

“I’m here as a proud American, a proud Democrat, a proud mother, and tonight in particular a very, very proud daughter,” Chelsea said.

On Thursday night we learned about the Hillary Clinton only her daughter knows. And compared to the introductory speech delivered by her Republican counterpart Ivanka Trump, Clinton’s speech was more fluff than stuff. Speaking in a near whisper, Chelsea talked about moments around the dinner table spent discussing a “A Wrinkle in Time,” trips to the Dinosaur National Monument, soccer games and the local library. She also recalled the letters her mom would leave for her when she traveled out of town for work.

“I loved that my parents expected me to have opinions and to back them up with facts,” she said. “I never once doubted that they cared about my thoughts and ideas. And I always, always knew how deeply they loved me.” True to form, however, Chelsea relayed her mother’s many accomplishments—honing in on the softer topics, the work the now-Democratic nominee has done throughout her career for families, children, and women. “People ask me all the time how she does it. How she keeps going amid the sound and fury of politics,” she said. “Here’s how. She never forgets who she is fighting for.”

Emilia Sykes, a 30-year-old delegate from Akron and a member of Ohio’s House of Representatives, could relate to Clinton’s sentiments. Her mother, Barbara, was on the city council when she was born.

“I was literally born into politics,” she told TIME ahead of Clinton’s speech. Her mom later became a state Representative. Her father Vernon was also a Representative, the seat she holds now was once held by both her mother and her father. As a child of politicians, Sykes has been a jack-of-all trades for her campaigning parents. Yet, like Clinton, she’s also had to stand by and watch her mom face criticism and name-calling.

“I’ve listened to people say horrible, nasty, untrue things about my mother,” Sykes said. Those statements left her either “outraged and ready to cry or ready to start swinging.” But Sykes says she relates to the younger Clinton even more for standing by her mom no matter what. “I can really appreciate Chelsea sticking with her mom and wanting to be her biggest cheerleader,” says Sykes.

And on Thursday, in subdued tones, eight years after taking the same stage to deliver a different speech—a speech to announce the candidate who’d left 18 million cracks in the biggest glass ceiling, but hadn’t crashed through—Chelsea grew emotional when she mentioned her own grandmother, Dorothy, who passed away in 2011. Her grandma, she said, would be “so, so proud.”

“I hope that my children will someday be as proud of me as I am of my mother. She makes me proud every single day,” Chelsea said. “And to everyone watching tonight, I know with all my heart that my mother will make us proud as our next President.” 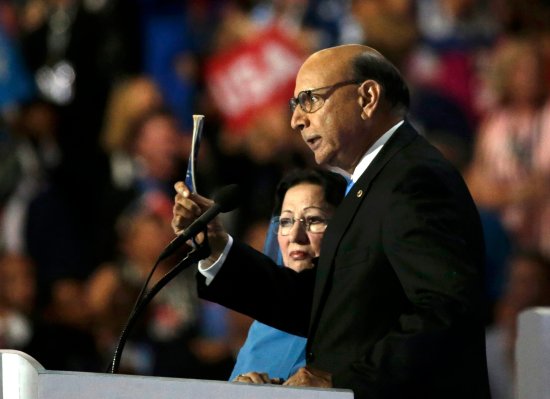 Watch the Father of a Fallen Muslim Soldier Ask Donald Trump if He Has Read the Constitution
Next Up: Editor's Pick