Hillary Clinton Accepts the Democratic Nomination at the DNC

Hillary Clinton formally accepted the party’s nomination for President, speaking at the final night of the Democratic National Convention in Philadelphia.

“It is with humility, determination and boundless confidence in America’s promise that I accept your nomination as President of the United States,” Clinton said.

She used the prime-time opportunity to preach a message of hope — and contrast herself with rival Donald Trump.

“Powerful forces are threatening to pull us apart,” she said. “Bonds of trust and respect are fraying. And just as with our founders, there truly are no guarantees. It is up to us. We must decide if we will all work together so we can all rise together.”

Trump, she said, has “taken the Republican party a long way, from morning in America to midnight in America.”

“He wants us to fear the future and fear each other,” she added.

The historic nature of her speech drew wild applause. “We have reached a milestone, the first time our party has nominated a woman for President,” Clinton said. “I am so happy this day has come … When any barrier falls in America, it clears the way for everyone. When there are no ceilings, the sky’s the limit.”

Clinton said her focus as President will be on growing opportunity for all Americans. And she targeted industry and banks as needing to do more for workers. “It’s wrong to take tax breaks with one hand and give out pink slips with the other,” Clinton said. “And I believe Wall Street can never be allowed to wreck Main Street again.”

She also reached out to supporters of Vermont Senator Bernie Sanders — some of whom had expressed skepticism of her candidacy.

“I want to thank Bernie Sanders,” she said. “Bernie, your campaign inspired millions of Americans, particularly the young people who threw their hearts and souls into our primary. You’ve put economic and social justice issues front and center, where they belong.”

“To all of your supporters here and around the country, I want you to know, I’ve heard you. Your cause is our cause.”

Chelsea Clinton introduced her mother at the convention. She described her “mom” as a grandmother who loves family and understands what it means “to be smiled on by fate.”

“My earliest memory is my mom picking me up, after I’d fallen down, giving me a big hug and reading me Goodnight Moon,” Chelsea said.

The theme for Thursday is “Stronger Together” and featured other speakers and performers, including Senator Sherrod Brown, minority leader Nancy Pelosi, artist Katy Perry and retired basketball player Kareem Abdul-Jabbar.

“Hillary Clinton is a woman of steel,” Minnesota Senator Amy Klobuchar told the Democratic National Convention. That was the message the Democratic women from the U.S. Senate sent as they spoke individually about the strength they see in Clinton.

The Senators touched on the historic nature of Clinton’s nomination, but mainly focused on personal stories about the party’s first female nominee. They said she has fought for children and families for decades.

“Hillary is building the foundation of an economy that works for everyone, and that’s real change,” said Washington Senator Maria Cantwell. Twelve of the 14 Democratic female Senators appeared on the convention stage.

Claire McCaskill told a story about Clinton contacting her when the Missouri Senator found out she had breast cancer. As Clinton campaigned around the country, McCaskill said, she checked in with the Senator several times. “She told me to keep up the fight,” McCaskill said. “Her words gave me strength during one of the greatest tests of my life.”

“Hillary Clinton knows how to fight back against dangerous, loud-mouthed bullies,” said Massachusetts Senator Elizabeth Warren. “She doesn’t run to Twitter to give people ugly nicknames. And she sure as heck doesn’t quit. She keeps on fighting for the people who need her most.”

Even a Republican spoke in favor of Clinton.

“I’m hear to say, Donald Trump, you are no Ronald Reagan,” said Doug Elmets, a former speechwriter for Reagan, who said he would vote in 2016 for a Democrat for the first time. “Donald Trump says, build the wall. Ronald Reagan said, tear down this wall.”

House minority leader Pelosi also took the stage, giving a short speech in which she expressed confidence in Democrats doing well this election.

“Our convention is different, and so is our mission. We come to public service and to this convention not to trumpet darkness but to fight a way forward for our country, a bright light forward. We come here confident that we are approaching a milestone in our nation’s history: the election of the first woman President of the United States,” Pelosi said. 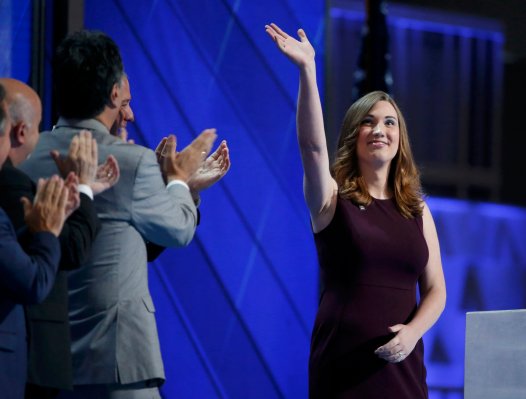 Read Sarah McBride's Speech at the Democratic Convention
Next Up: Editor's Pick