On the third day of the Republican National Convention in Cleveland, I found myself in a precarious situation. I was about to be removed from the building because, as I was told, I was a security threat. I’m a five-foot-tall, 98-pound suburban mom. But to Donald Trump’s team, anyone—even a petite, credentialed delegate sitting in her assigned area—is a threat if she’s wearing the wrong Size Small T-shirt under her jacket. And I was. Mine said “Black Lives Matter.”

Now, before you roll your eyes, let me explain. I’m white, and when I wore that T-shirt, I had a point to make, and it was not at all “anti-police.” I admire and respect these men and women who serve their communities in what can be an incredibly difficult, demanding, and stressful job.

When I decided to attend the convention as a delegate for Jeb Bush, I was incredibly frustrated with what I saw as the shrinking, increasingly inward-looking turn the Republican Party—my party—was taking. Being from New Hampshire, I have been involved in my share of primary contests. We disagree—often, strongly and loudly—but we understand that it is a big party and there are many points of view. This year, it is different. Very different.

The intolerance for differing visions of what the party ought to stand for, which Americans it ought to represent, which values it ought to champion and defend has felt suffocating. I went to Cleveland determined to show whoever cared to look that the Republican party is more inclusive, more tolerant, more open to differing points of view than one might think by reading the headlines of late.

The day prior to being deemed a “security threat,” I wore a #NeverTrump T-shirt. I wore it on the convention floor, and no one stopped me. No one threatened to eject me. I engaged in some lively discussions , but I was allowed to make my statement unmolested. Then I attempted to show that some Republicans believe we ought to have an open and honest discussion about race relations in the country we all love. Apparently that was one step too far.

I believe that the problem of racial inequality matters to us all and that it will not be resolved if we are not all contributing to finding solutions. For generations, individuals have felt threatened because of the color of their skin. The Black Lives Matter movement has organized the country to present a message—that discrimination and racial profiling can no longer stand. They are asking community leaders and elected officials for a reprieve.

We can agree or disagree with the movement’s message, its tactics, its attitude, but I don’t see how we can ignore it. And I can’t think of a better place to talk about this tremendously important political issue than at a party political convention—the place where Americans will look to see what solutions our party offers them.

I had a number of people stop me to ask about my shirt. Most were grateful to know the issue was not being dismissed. A woman at the Rock n Roll Hall of Fame had tears in her eyes as she thanked me several times. Others called me brave, which I dismissed outright. I had the privilege and duty to represent voters as a delegate. For me, this was part of “the gig.”

If a group of Americans feels discriminated against or threatened by the very people their tax dollars pay to protect them, then we have a real problem. We can do better, and we must. I encourage all elected officials to talk with their police departments. I encourage people to share their stories, and not just the bad. We need healing, and healing depends on a little hope that things can be better — and things are getting better.

Though I was sitting with my delegation—all people I knew or who had been friendly faces that week — when confronted, I was asked twice, by the same person, to show him my delegate credential. After about ten minutes, I was visited by a Sergeant at Arms. I was told my shirt made me a security threat.

I assured him that I had no intention to disturb the evening’s activities. I was told to either remove the shirt or leave the arena or I would be escorted out.

My eyes filled with tears. Being bullied is not an enjoyable experience. Those around me knew full well I was not the security threat they claimed me to be. I thought about standing my ground and waiting for someone to walk me out. But getting tossed out was not the point of wearing the shirt.

I wasn’t there to create a scene; just the opposite. Being muscled to the door would have undermined my message. The story would no longer be, “conservatives support equal and fair treatment of all people.” It would be, “Woman in ‘Black Lives Matter’ T-shirt tossed from Republican convention.”

Those sitting around me noticed my disappointment and urged me to stay on the convention floor. “Don’t let them win.” “We know you are right.” They gave me hope. Even though my mission was ended prematurely, there were people, Republicans, who sympathized with the movement. People did care, and that gave me hope. I went to the restroom, turned my shirt inside out, and returned to the convention greeted by friends old and new.

I should not have been alone on that convention floor trying to send a message of inclusion and understanding. I should have been one of many. From its very start, our party has championed individual liberties and civil rights. “We are the party of Lincoln and women’s suffrage,” is often echoed at our local party events. This time is no different. We are being asked to lead here again. And we can lead, but only if Republicans join together to force the conversation.

Ed note: A spokesperson for the RNC did not immediately respond to TIME’s request for comment. 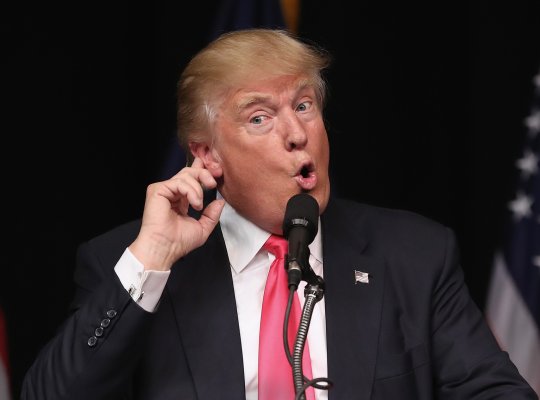 Is Donald Trump Good for Space?
Next Up: Editor's Pick