A woman buys a newspaper from a kiosk in Istanbul on July 28, 2016.
Petros Karadjias—AP
By Jared Malsin/Istanbul

Turkish columnist and human rights lawyer Orhan Kemal Cengiz was at passport control at Istanbul’s main airport on the morning of July 21, wearing shorts and ready to board a flight to London for meetings, when security officials took him to a side room. A prosecutor had ordered him taken into custody. Later that day, police escorted him to a central police station in Istanbul where he was placed in a cell with three low-ranking military officials accused of participating in the failed military coup that had shocked Turkey less than a week earlier.

A prominent liberal intellectual in Turkey, the 48-year-old Cengiz was one of a growing number of journalists and media workers caught in a widening clampdown in Turkey in the aftermath of a coup attempt that left more than 200 people dead. In recent days the government of President Recep Tayyip Erdogan has issued orders shutting down 131 media organizations, and issued arrest warrants for at least 89 journalists and other media personnel over alleged ties to the coup plot.

Turkish journalists and rights groups say the new restrictions signal a major acceleration of a clampdown on the press that was already underway well before a faction of the Turkish military attempted to overthrow the government. Under Erdogan’s government, the space for freedom of expression had already narrowed prior to the coup attempt, According to the Committee to Protect Journalists, at least 14 journalists were in Turkey’s prisons as of December 2015, a figure that places Turkey in a comparable category with like Egypt (with 23 journalists in prison) and Iran (19). The Turkish government had been moving to seize control or shut down critical media, and also restricted the use of social media.

Cengiz said he was not questioned until the fourth and final day of his detention. (He was released on orders not to leave the country on July 24). A respected attorney and journalist with no ties to the military coup plot, he told his interrogator, a prosecutor, that his arrest made a mockery of the government’s attempt to investigate the coup plot. “If you start to arrest some people like myself: human rights defenders, lawyers, journalists, et cetera, you would start to jeopardize these legal procedures,” he says over the phone. “You would make them appear unserious. If you really want to have a solid case against the coup plotters, you should carefully distinguish people. You should never give the impression that you are doing a witch-hunt.”

Read More: Turkey Could Be Taking A Big Step Backwards In Human Rights

The phrase “witch hunt” is exactly how many critics describe the government’s current approach to media. The primary target of the current crackdown are journalists the government views as affiliated with Fethullah Gulen, an influential U.S.-based religious leader who Erdogan claims was the instigator of the coup attempt. (Gulen has denied playing a role.) But in the eyes of rights advocates, the sheer scale of the clampdown suggests that the government is taking an almost farcical view of who it links to the coup plot or the Gulen movement. Gulen denies any role in the coup attempt, and Western states have urged restraint as the Turkish government reasserts its grasp on the country. On Thursday German Chancellor Angela Merkel said she was “worried” by the crackdown in Turkey, saying at news conference in Berlin, “the principle of proportionality must be ensured by all.”

Cengiz previously wrote a column for Today’s Zaman, the English edition of a Gulen-linked newspaper, and also represented the papers in legal proceedings when the government seized control of them in March. He told prosecutors that, in the wake of the government’s previous moves to restrict media, Gulen-affiliated outlets offered a kind of last refuge for ordinary Turkish dissidents.

“Erdogan didn’t give us any choice. He just purged the other media so much and there was a few options for liberals like myself to write, to speak, and it was Gulen’s media. It’s funny in a way,” he says.

Though the coup failed, it came close to succeeding—and imprisoning or even killing Erdogan. So the government’s reaction has been massive in scale. On June 20 the government declared a three-month state of emergency that expands the president’s power to rule by decree with little oversight from parliament. The government has also suspended, fired, or detained tens of thousands of civil servants, and closed more than 1,000 schools.

More than 15,000 people were detained over allegations of ties to the coup plot or the Gulen network. According to Amnesty International, there is “credible evidence” that some detainees were subjected to beatings and other forms torture including rape. The government says the allegations of torture are “unfounded” and that human rights organizations fail to understand the authorities’ challenge in restoring order after a bloody and traumatic military coup attempt.

The clampdown on media escalated this week with the issuance of arrest warrants for at least 89 journalists, including many formerly associated with the Zaman newspapers. On July 27, the government also issued a sweeping decree ordering the outright closure of 45 newspapers and 16 TV stations, including numerous regional outlets and the well-known liberal newspaper Taraf. “This goes well beyond any legitimate aim that the government might have about guaranteeing public order about upholding public order, and it’s just a very arbitrary and brutal crackdown on free expression, on free speech,” says Emma Sinclair-Webb, a senior Turkey researcher with Human Rights Watch.

Sinclair-Webb said that while the current clampdown mainly targets alleged Gulen-affiliated institutions, the government had provided no evidence of wrongdoing on the part of any of the media outlets, regardless of affiliation. “This idea of this awful labeling of people in the absence of any evidence of criminal activity is a very dangerous way to go, and so that’s the witch hunt style,” she says. “You can have media you disagree with. You can have media you find propagandistic or partisan or whatever, there’s always media like that. But this is just intolerance, part of an attempt to wipe out the Gulen movement in Turkey.” 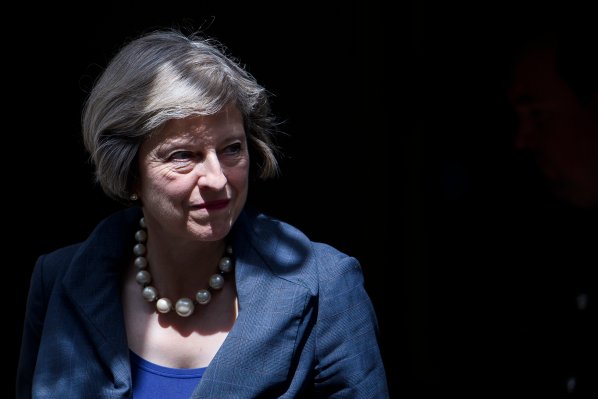 Pressure on Britain's Theresa May to Call Snap Election
Next Up: Editor's Pick