At the end of the 19th century, journalist and reformer Victoria Earle Matthews sounded the alarm about what amounted to a system of sexual slavery then thriving in post-emancipation America. So-called “employment agents” operating throughout the South were targeting poor, young black women and luring them to northern cities with the promise of work, only to deliver them to urban brothels and red-light districts. Matthews, who could pass as white, went undercover to investigate the system she described in 1898 as “a perfect network of moral degradation for the unknowingly unfortunate who may happen to fall into its toils.” Having drawn attention to the plight of the unfortunate girls, she decided to go further, and offer them a real refuge, at the White Rose Mission.

Located first on East 86th Street and later in Harlem, the Mission, which Matthews established in 1899 with Brooklyn schoolteacher and activist Maritcha Remond Lyons, was a home, school and community center. It was modeled on the Progressive Era settlement houses of New York and Chicago, which helped poor immigrants acclimate to their new homeland—but which rarely extended their services to African Americans. Volunteers would meet girls at the docks or train station when they arrived in town, whisking them to the Mission, where they could stay, study and practice the skills that would allow them to find decent (if low-paying) work in domestic service or the garment industry. The Mission’s volunteers also did what they could to help the local community, operating a kindergarten and classes for older children, and visiting families in need. But its aims went beyond the practical: Matthews wanted to instill virtue in her girls, along with racial pride and political awareness.

Victoria Earle Matthews was a fiercely self-made woman. She was born in Fort Valley, Ga., in 1861, the daughter of an enslaved woman and, most likely, her white master. Soon after Victoria’s birth, her mother, Caroline Smith, escaped to the north, returning after the Civil War to claim her children from her former owner. According to some sources, this effort made her the first black woman to win a court case in the state of Georgia. Caroline took Victoria back to the north, where she had to leave school in order to help support her family by working as a maid. Her employer, apparently, recognized her intelligence and gave her the free run of his library.

At 18 she married, and within a few years was writing regularly for daily newspapers in New York and for the national black press. She also published fiction, and her writing shared in the ideology of “racial uplift”—the moralizing ethos of self-help and striving advocated by many prominent black leaders in the late 19th and early 20th century, and later reviled by others as a compromised, elitist response to the dire conditions of Jim Crow. At the same time, Matthews established herself as a suffragist and advocate for women’s rights. For both black and white women in the pre-suffrage era, political activity was dominated by a proliferation of clubs and societies. Matthews was active in the newly formed Woman’s Loyal Union, which supported her fellow journalist Ida B. Wells’s anti-lynching campaign, and in the newly formed National Association of Colored Women.

But just as her career as a writer and activist was thriving, her life was thrown off course by personal tragedy, with the death of her only son, in 1895, at the age of 16. She directed her grief into a focus on the welfare of children, and the White Rose Mission was born. It constantly struggled to survive, dependent on the generosity of mostly white benefactors and a staff of untrained volunteers. Furthermore, it was operating in New York at a time of mass immigration from Europe, which many saw as pressuring the already scarce employment opportunities for African Americans. It was one thing to protect a girl from vice by training her for a decent life in service—it was quite another to keep her out of danger if she simply couldn’t find a job.

Matthews died in 1907, before she was 50, having battled tuberculosis for several years, and did not live to see the White Rose Mission established in its permanent home at the epicenter of postwar black life in Harlem. (It closed in 1984.) Yet her attention to the hitherto invisible plight of young black women in the city inspired a new wave of black social welfare programs. She was credited by one contemporary as “a missionary, a teacher, a preacher, a Sister of Mercy, all in one”—but she deserves also to be remembered for her fearlessness, in uncovering a vicious and corrupt system, and her tirelessness in fighting to save vulnerable girls from the men who controlled it. 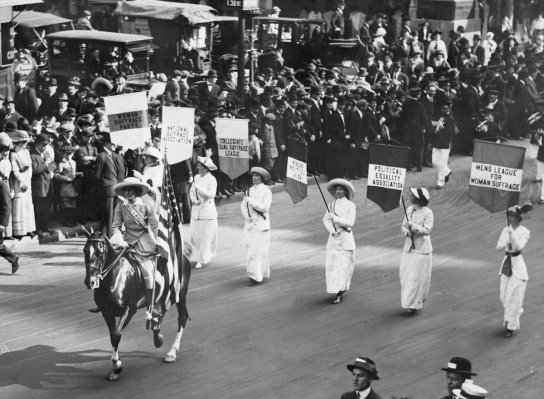 The Society Girl Who Became a Martyr for Women's Suffrage
Next Up: Editor's Pick