“Do I contradict myself? Very well, I contradict myself.” So said Walt Whitman. Hillary Clinton’s critics say she shifts her positions for political convenience. Her fans say the evolution of her views shows that she listens and learns. Either way, there are significant differences between Secretary of State Clinton, candidate Clinton, and what we might expect from a President Clinton. These 5 facts detail those differences.

Criticism of Clinton’s foreign policy invariably begins before her tenure as the Obama administration’s lead diplomat. Clinton, along with 76 other senators, voted in favor of the Iraq War in 2002. The junior senator from New York, Clinton would eventually issue a mea culpa in a 2014 memoir: “I thought I had acted in good faith and made the best decision I could with the information I had. And I wasn’t alone in getting it wrong. But I still got it wrong. Plain and simple.”

In fact, Clinton has hawkish tendencies that can’t be denied. When Obama began drawing down troops in Iraq, Secretary Clinton wanted to leave behind a residual force of 10,000-20,000 American troops. She supported the surge in Afghanistan in 2009, and argued for intervention in Libya in concert with the French to oust Muammar Qaddafi.

But the Middle East is not doing well these days—which leaves Clinton in a bind. Candidate Clinton needs to project strength and toughness for a fearful electorate without further alienating those on the left who don’t trust her. You don’t get much room for error when your unfavorable rating is at 57 percent. And while Secretary Clinton made the case for forceful intervention in Syria that Obama would ultimately rebuff, that issue isn’t useful for her: Syria makes Obama look bad, and she really needs his help (and the reflected glow of his 56 percent approval rating, according to a recent poll). But if she becomes President Clinton, you can expect more active engagement in the region, bringing the U.S. back in the direction of its traditional tendency toward intervention in the Middle East’s security emergencies.

Read More: How the Obama Revolution Could Hurt Hillary Clinton

As Secretary of State, Clinton spearheaded America’s “reset” with Russia to strengthen diplomatic relations and spur greater cooperation across a host of issues, including counterterrorism and nuclear proliferation. In fact, the New Strategic Arms Reduction Treaty (START) shepherded along by Clinton would place a ceiling of 1,550 nuclear warheads for both the U.S. and Russia, a significant drop compared to START I’s limit of 6,000.

But beneath the surface, there was little Clinton could do to warm the perpetually frosty U.S.-Russia relationship. By the time Vladimir Putin ordered troops into Crimea in 2014, Clinton was ramping up her presidential campaign and likening Putin’s land grab to “what Hitler did back in the ’30s.” As a candidate, she’s argued forcefully for checking Russian aggression, but how a President Clinton would respond to that aggression depends on what Putin does next. It’s also worth questioning how important U.S. and Russian relations really are? Economically speaking, Russia is just the U.S.’s 24th largest importer and doesn’t even crack its top 30 exporters. Washington and Moscow can share information on terrorist threats. They can communicate with one another to ensure their competing interests don’t inflict unnecessary collateral damage. But it’s hard to imagine what force could bring the U.S. and Russia together as friendly partners.

Clinton’s most ambitious initiative while at State was the famed “pivot to Asia,” the long-term strategic realignment of U.S. interests towards the Pacific in which she played a leading role. Clinton famously travelled to Beijing as First Lady back in 1995 and delivered blunt criticism of that country’s human rights record. Yet by 2009, Clinton was wondering aloud “how do you deal toughly with your bank,” recognizing that secretaries of state have less leeway to lecture than presidential spouses—especially when the country they represent owes the other $1.46 trillion. Yet, as a presidential candidate, Clinton has returned to pugnacious form, accusing the Chinese government of “trying to hack into everything that doesn’t move,” even if the criticism is intended mainly to narrow any electoral advantage Donald Trump might gain from talking tough on China.

Still, China has become too important to the global economy and a functioning world order for a President Clinton to adopt anything but a cautious and pragmatic approach.

But if China represents Clinton’s tendency toward pragmatism, the other component of the Asia pivot—the Trans-Pacific Partnership (TPP)—represents her willingness to cave under heavy political pressure. TPP was supposed to be a central part of Barack Obama’s presidential legacy. Instead, it’s become a lightning rod for controversy as Trump rides nativist bluster and “America First” protectionism to the final runoff for the U.S. presidency. Should TPP pass, it would link the U.S. with 11 Asian countries (excluding China), uniting 40 percent of the world’s GDP together in a single comprehensive trade deal.

Clinton was a prime architect of TPP, and spent years touting its virtues and necessity. But faced with a growing protectionist backlash—some 53 percent of Americans now believe that free trade kills more jobs than it creates—Clinton has retreated behind the paper-thin refrain that “I do not currently support it as it is written.” Tim Kaine—Clinton’s VP pick—was also a supporter of TPP until this week, where he fell in line behind the Clinton campaign message.

The reality of politics in America today is that the job determines the motive. The Secretary of State wants to build a solid foreign policy; the candidate wants to get elected; the President is commander-in-chief and must respond to the world as it is—not just through diplomacy but sometimes with the credible threat of force. Clinton is nothing if not a career politician, and her shifting views on foreign policy reflects that. It will be up to voters to decide how her approach compares with the foreign policy vision put forward by her aggressive and outspoken opponent. 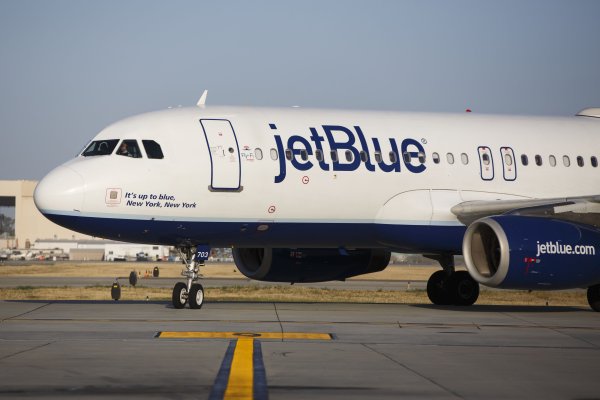 Cocaine Found In 2 JetBlue Planes In Florida
Next Up: Editor's Pick