These Republican Scandals Are Not Scandals

The big scandal in Florida politics these days is the resignation of Governor Rick Scott’s top fundraiser, health care executive Mike Fernandez, and the emails he sent complaining about the campaign’s approach to Hispanic voters. “But what do I know, I have only made over a billion selling to this population,” Fernandez groused. He clearly got upset when Scott’s operatives blew him off, and his plaintive emails do make for amusing reading: “Trust this: My net worth exceeds $3B, and I made it because I am not stupid and I can sell!”

Fernandez thought clueless Anglos who didn’t understand Florida were controlling the Scott campaign.“Would you hire me to manage a campaign in Mississippi for a country bumpkin?” he asked.

I’m not usually sympathetic to my Tea Party governor, but Fernandez sounds like a jerk, an egomaniacal CEO who thought his money entitled him to call the political shots. His juiciest allegation—that some staffers on a Scott campaign van were mocking Mexican accents—was pure hearsay. Anyway, I’m not sure the guy dissing “country bumpkins” should be griping about cultural insensitivity.

The larger point is that this “scandal” tells us nothing about Scott’s fitness for a second term. It’s just more gotcha grist for the American political umbrage-a-thon. It is not about Scott’s early support for tougher immigration laws, or his relentless opposition to Obamacare, or any other policies that affect Hispanics and everyone else in Florida. It’s just about optics. It’s a pseudo-scandal, and there seem to be a lot of them percolating these days, mostly involving Republican candidates. Democrats apparently see these made-for-media flaps as their best chance to avoid getting clobbered in November, but there’s something pathetic about that.

Does anyone honestly think that Kentucky senator Mitch McConnell’s flubbed web ad—it featured images of Duke’s basketball team rather than Kentucky’s—illustrates the minority leader’s insufficient ardor for Wildcat hoops? Or that he would be unfit for office if it did? Do any Wisconsin residents truly care that some of Governor Scott Walker’s staff might have mixed campaign work and official business? Does it really matter that Kansas senator Pat Roberts doesn’t seem to live in Kansas? I get why Democrats are mocking Scott Brown as an opportunistic carpetbagger who moved to New Hampshire because he couldn’t win a Senate race in Massachusetts, but a senator’s residency is infinitely less important than a senator’s policies.

Even the biggest scandal in politics this year, Chris Christie’s Bridgegate, is mostly a nothingburger. His staff secretly caused a traffic jam for a few days? And the whole mess had something to do with political payback? That’s a shame, I guess, but Governor Christie himself openly killed a federally-financed rail tunnel from New Jersey to New York City, a decision that was just as politically motivated and will cause traffic problems in Fort Lee and beyond for decades. Somehow, though, the actual policies made by policymakers aren’t seen as scandal material. They’re just the stuff that affects people’s lives.

There’s a new Democratic pseudo-scandal, too: Bruce Braley’s mockery of the idea that an Iowa farmer could chair the Senate Judiciary Committee, the kind of mockery you don’t want caught on tape when you’re running for Senate in Iowa. Braley should probably join Mike Fernandez for some rural sensitivity training, but if you’re an Iowa farmer, you probably care less about his views on your fitness to run the Judiciary Committee than his views on agriculture policy, which, judging from his website, seem as absurdly farm-friendly as any other Iowa politician’s.

Republicans are having a field day with Braley’s gaffe, but in recent years, the GOP has focused less on pseudo-scandals, things that happened but aren’t really scandals, than fake scandals, things that never happened, like the president using the IRS to go after his enemies, or whatever the latest conspiracy theory is about Benghazi. Peddling fake scandals is certainly less ethical than peddling pseudo-scandals, but it’s arguably less insulting to voters. You can’t expect Kentuckians to care whether McConnell’s online advertising staff inadvertently used stock footage of the wrong basketball team unless you really do think they’re country bumpkins.

But making stuff up and hyping stuff up are both the kind of things parties do when they have no confidence in their ideas. This makes sense for the Republican Party, which currently believes all kind of wrong and unpopular things about the role of government in American life. It’s more interesting that Democrats are so unwilling to stand behind the accomplishments of the Obama era, and so unable to persuade voters that Republican efforts to cut off unemployment benefits, block immigration reform, deny global warming are truly scandalous. Instead, they’re trashing Bill Cassidy, the Republican Senate candidate in Louisiana, for suggesting that the uninsured are “less educated” than Americans with health insurance. Which was absolutely true.

Maybe Mike Fernandez can help them out now that he’s got some time on his hands. The Democrats could surely use someone who isn’t stupid and can sell. 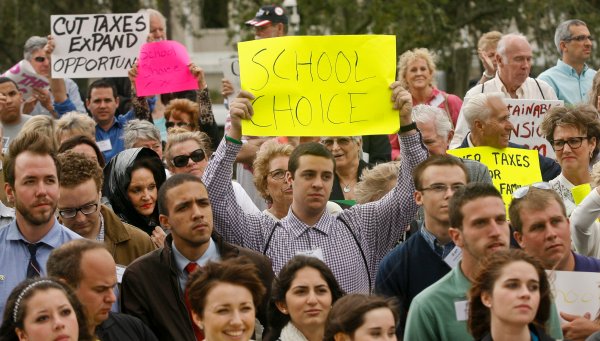 The Tea Party is Running Out of Steam
Next Up: Editor's Pick