Everything You Need To Know About the New Nusra Front

An undated militant photo released online on July 28, 2016, shows Abu Mohammad al-Julani. The Nusra Front leader announced in a video message that the militant group is changing its name and claims it will have no more ties with al-Qaeda. The video was aired on the Syrian opposition station Orient TV and Al-Jazeera.
AP
By Tara John

The Nusra Front announced its split from al-Qaeda on July 28, with the group renaming itself Jabhat Fatah al-Sham. The move is being seen as a shrewd attempt to hide their militant ideology and protect themselves from a growing international campaign against militant fighters in Syria.

Appearing in a video on Thursday, the Nusra Front’s leader Abu Mohammad al-Julani revealed his face for the first time, saying that the rebrand was “to remove the excuse used by the international community—spearheaded by America and Russia—to bombard and displace Muslims in the Levant: that they are targeting al-Nusra Front, which is associated with al-Qaeda.”

Read More: Putin Is on a Foreign-Policy Winning Streak

Their break comes with an official blessing from al-Qaeda leader Ayman al-Zawahri. According to Reuters, the leader told the Nusra Front in an audio message that organizational ties could be broken with the global terror group in order to help it continue its battle for Syria. Here’s what you need to know:

The group’s Syrian commander, Julani, is believed to have joined al-Qaeda and fought in the Iraqi insurgency against U.S.-led forces in early 2000. In 2011, Abu Bakr al-Baghdadi (the current leader of ISIS who then led al-Qaeda’s branch in Iraq) wanted to take advantage of the power vacuum caused by the Syrian civil war, sending seven top lieutenants, including Abu Mohammad al-Julani, to lay the groundwork for a Syrian expansion.

The group’s existence was formally announced with a video posted online on Jan. 24, 2012. In it Julani declared war on the regime of Syrian President Bashar al-Assad and called for Sharia law as the governing system in Syria. According to Charles Lister, a senior fellow at the Middle East Institute, the Nusra Front was initially unpopular with the Syrians due to the bloody nature of its attacks, including urban suicide bombings, that went against the initial spirit of the country’s popular uprising.

The group has since won support, though. In April 2013, Baghdadi declared that the Nusra Front had joined forces with his group to become the group known as ISIS. The Nusra Front denied such a merger, and distanced themselves from ISIS’s attempt at gaining a foothold in Syria by re-affirming their allegiance to al-Qaeda—who less than a year later in 2014, disowned ISIS for being too brutal. The Nusra Front then focused on becoming a local insurgency group by winning military victories against the Syrian government, such as pushing out Assad’s forces from the northwest Idlib province in 2015 and helping moderate rebel groups in battle.

Today the group is made up of 70% local Islamists and 30% foreigners, and is estimated to have between 5 to 20 thousand fighters. “Since its emergence in Syria” writes Lister in a Brookings Institution report, “Jabhat al-Nusra has transformed itself from an unpopular outsider accused of [ISIS]-like brutality to one of the most powerful armed actors in the Syrian crisis.”

The Nusra Front was designated a terrorist organization by the U.S. State Department in 2012. In a 2015 Al Jazeera interview, Julani attempted to present a more moderate image, calling ISIS’s self-proclaimed caliphate as “not based on Islamic law” and promising not to carry out attacks on the West.

But many aren’t convinced. A Human Rights Watch report from 2015 said the group was “responsible for systematic and widespread violations including targeting civilians, kidnappings, and executions,” and are no different to ISIS in that they hold “discriminatory rules on women and girls and they have both actively recruited child soldiers.” Middle East Institute’s Lister argues that it is a guise and they will always hold the militant ideology of al-Qaeda. The Nusra Front are working incrementally to eventually establish its own caliphate and “zones of territorial control from which it can launch attacks against the Western world,” says Lister. “Whatever the outcome, it remains hard to fathom how the majority of Jabhat al-Nusra’s leadership could truly renounce and give up their decades-long devotion to al-[Qaeda’s] global vision.” 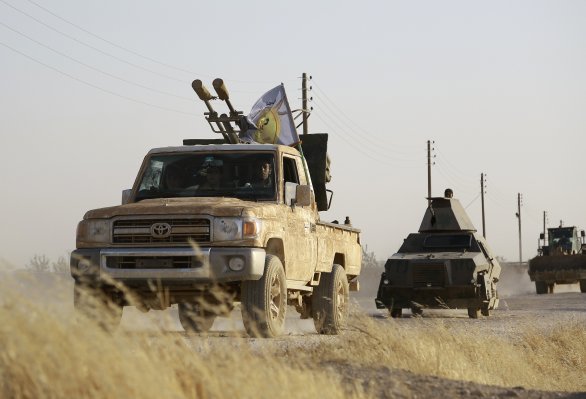