Aug. 14, 9:25 p.m. E.T.: Justin Gatlin has had the date circled on his calendar since it was announced as the men’s 100-m finals at the 2016 Summer Olympics. The event is known as the most thrilling 10 seconds in sports, and this one is likely to be a heavyweight showdown: the unshakable Usain Bolt, unbeaten at the Olympics since 2008, vs. Gatlin, who won the event in Athens back when George W. Bush was running for a second term. Both men are chasing history in what is almost certain to be their final Olympics. A win on that Sunday night in Rio would make Bolt, who turns 30 on Aug. 21, the first three-time 100-m champion in history. Gatlin, 34, would be the oldest sprinter to earn 100-m gold and the first to win the event two times a dozen years apart.

Few rise to the occasion better than Bolt, who remains the strong favorite despite a hamstring injury that caused him to pull out of the Jamaican Olympic trials in July. But if anyone can take him down, it’s the Brooklyn-born, Florida-raised Gatlin, who has been nipping at Bolt’s spikes during a stunning late-career comeback. Gatlin clocked the world’s two fastest 100-m times this year and lost to Bolt by just one-hundredth of a second at last year’s world championships in Beijing.

“A lot of people over the last couple of seasons have fallen prey to the unstoppable force Usain Bolt brings to the table,” Gatlin says over a storefront sushi lunch near where he trains in Orlando. “And they just become subdued. That’s not who I am. I’m not going to allow myself to become a subdued character.”

However, this being track and field–a sport whose Olympic heroes have a history of being exposed as doping cheats–the narrative is far more complicated. Gatlin tested positive for a performance-enhancing substance in 2006 and served a four-year ban during the prime of his career. He returned in time to make the 2012 Olympics, winning a bronze to Bolt’s gold. But by then, the story line was set: Gatlin, who believes he had been set up and says he never knowingly took steroids, was the unapologetic villain; Bolt, whose smile seems to come as easily as his world records, was the hero.

Can we believe that Gatlin is running faster than any other 34-year-old in history without chemical assistance, given his past and the prevalence of drugs in his sport? “I’m not a villain,” Gatlin says when asked about it. And he has passed every drug test since his suspension. But he acknowledges that his situation makes him a complicated face for Team USA: “I understand that my presence can confuse people.”

When he lines up on the starting block on Aug. 14, Gatlin will be running for more than a medal. Win–and then test clean–and he’ll be remembered as the man who pulled off the impossible, one of the greatest sprinters ever. Lose? Well, Justin Gatlin would rather not think about that. He has no plan B.

These days, Gatlin’s toned physique is crowned by specks of white hair above his forehead. “Wisdom, man,” he says. But back at the 2004 Olympics, Gatlin was the fastest of a new wave of U.S. track athletes expected to lift a cloud over a sport tarnished by the BALCO doping scandal that ensnared stars like Marion Jones. Gatlin followed his success in Athens with 100-m and 200-m world titles in 2005. Then his career was cratered by the positive drug test. He had a phone conversation with his mother after finding out. “All I could hear was him screaming and screaming on the other end,” Jeanette Gatlin later testified at an arbitration hearing. “‘No, no, no, no, I’m dead, I’m dead.'” Today Gatlin maintains his innocence. “I never knowingly did anything,” he says.

Gatlin had spent his life training, and the four-year suspension from the track took him to a dark place. “I didn’t see the worth of me,” he says. He flirted with joining the military and says he took stupid risks, like driving after drinking. “If I wrap my car around a tree right now, no one would miss me,” he recalls thinking. “It was a continuous pain you couldn’t fathom.”

Shame and age would have been enough to end most Olympic careers. But Gatlin returned to the track in 2010 with a point to prove. If he could run faster than before his suspension and pass every drug test, he’d show that steroids never aided him. “It was like, man, if I come back to this sport, I’ve got to help these people who have been defending me, loving me,” Gatlin says, “and shut these naysayers up.”

He had to take the long way back. Race promoters were wary of his tainted reputation, and Gatlin climbed his way up through races in Estonia and Finland. He’s since gotten faster, inevitably raising questions about whether he’s aided by more than hard work. No human has ever run faster at Gatlin’s age. According to a 2015 analysis of the world’s 10 fastest 100-m sprinters by University of Colorado professor Roger Pielke Jr., they stopped improving, as a group, when they were around 25. Gatlin got faster at 33. “It certainly does stretch the boundaries of what’s plausible,” says Ross Tucker, a professor of exercise physiology at the University of the Free State in South Africa.

Gatlin points to certain technical improvements since he returned to the track, like a shorter stride length and higher hip position that can generate more force. “If people would just wake up and be smart, they’ll be able to see certain things,” he says. Ato Boldon, a former Olympic sprinter who will cover track at Rio for NBC, calls Gatlin’s drive phase–when sprinters lean forward to accelerate right after the start–a model of technique. “If I were to do a videotape now of how to teach it to someone, Justin Gatlin wouldn’t just be part of the video,” says Boldon. “He’d be on the cover.”

Training for the showdown back in Florida, Gatlin is just trying to block out all the noise. “This is one of the crown events of the Olympics,” he says.”It’s my responsibility to put on a great show.” For both his sport and for himself. Beat Bolt, and win believers. 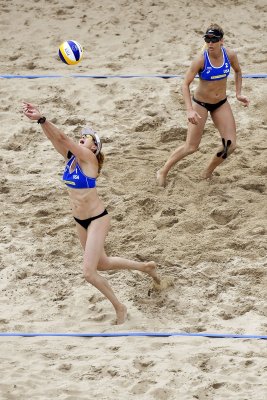 A New Beach Volleyball Partnership Faces its Toughest Test Yet
Next Up: Editor's Pick