Simone Biles Is Taking Her Sport to New Heights

No apparatus is more precarious for female gymnasts than the balance beam. Staying on the beam–which is 4 ft. off the ground, 16 ft. long and just 4 in. wide, not much wider than a credit card–is challenge enough, never mind trying to make an art out of getting off it. Yet at the recent Olympic trials in San Jose, Calif., Simone Biles flipped to one edge and propelled herself into the air, turning two backflips and then a twisting somersault with a nearly inhuman hang time.

“I know exactly how difficult that move is because I worked so long and so hard on it,” says Shannon Miller, who won gold on the beam at the 1996 Olympics. “When Simone does it, you just get so jealous because she just floats.”

The dismount, known as a full twisting double back, is the most difficult one that any gymnast will be attempting in Rio, yet it’s only the second toughest in Biles’ repertoire. In practice, she can add another twist to make it a so-called double double. Only a handful of people have even tried it, much less pulled it off. But Biles has, and like any self-respecting teen, she has the cell-phone video to prove it. Because when her coach realized that Biles was leaping high enough to squeeze in another full twist, she prompted her to give it a shot. Biles’ response? “Bring out your camera, because I’m only doing it once, and if I die I want it recorded.”

Biles executed the double double flawlessly before landing, upright, in the foam pit.

Not that anyone expected her to fail. The 19-year-old Texan has won the past three world championships with an unparalleled combination of skill and power. Just 4 ft. 8 in.–the shortest member of the 555-person U.S. delegation in Rio–Biles pulls off moves too challenging for even her elite rivals, soaring with a preternatural comfort in the air. She’s “in a caliber with nobody else in the world, really,” says Nastia Liukin, the 2008 Olympic all-around gold medalist, who will cover the Games for NBC. “Nobody is even close to her.”

That’s a key reason expectations are sky-high for the U.S. team in Rio. The squad, which is favored to defend the team gold it won in London, includes the reigning all-around Olympic champion, Gabrielle Douglas, 20; her 2012 teammate Aly Raisman, 22, a three-time medalist; and Laurie Hernandez, 16, and Madison Kocian, 19, who will make their Olympic debuts along with Biles.

The pressure on Biles is particularly acute. A U.S. woman has won the past three all-around golds, and Biles is favored in three of her sport’s four individual disciplines. (Uneven bars are a rare sign of her mortality.) Her routines are so much more difficult than those of her competitors that there is a sense that the only person who can stop Simone is, well, Simone.

The weight of this burden is not lost on the world’s best gymnast. “I feel like it’s harder because everyone knows I’m the three-time world champion–it’s almost like people are waiting for something bad to happen,” she says during a training session at her gym in Spring, Texas. “That kind of stresses me out a bit.”

This world-beating potential was hard to spot when Biles first moved up to the senior level in 2013, after toiling in the junior ranks because she lacked flexibility. Her first event was particularly rough. “She said she heard every noise, everyone yelling in the arena, and she couldn’t get focused,” says her mother Nellie. Biles came close to falling off the beam twice, slipped off the uneven bars and nearly fell facedown on her last tumbling run on floor exercise. After a shaky landing on her first vault, her coach, Aimee Boorman, finally pulled her from the event. “Her mind wasn’t in the right place, and the risk of her injuring herself was not worth it,” says Boorman, who discovered Biles at a Houston gym and has trained her since she was 8.

Concerned that the anxiety of elite competition was going to consume her daughter, Nellie found a sports psychologist to help her manage her nerves. It was just one supportive act in a long line of them. Nellie’s husband Ron is Biles’ biological grandfather. Ron’s daughter struggled with drugs and alcohol before giving birth to Simone and her sister Adria in Columbus, Ohio. When the girls, along with their two older siblings, were put in foster care, Ron and Nellie decided to adopt their two youngest grandchildren. On Christmas Eve in 2002, when Simone was 5 and Adria was 3, Ron brought the girls to their new home in Spring, outside Houston. He and Nellie have been their parents since.

Biles is in contact with her biological mother, who calls and sends gifts on birthdays and holidays, but she no longer dwells on what might have been. “Growing up, I wondered what my life would have been like if none of this had happened,” she says. “Sometimes if I get really, really deep in thought, I wonder if she feels bad about what happened and wishes she had done things differently. But it’s not my job to wonder about that. Those aren’t questions for me.”

Boorman says the ability to channel her energy is crucial to Biles’ success. After her disastrous showing in that first senior meet, Boorman says, Biles “decided that’s not who she wanted to be. She said she wanted to be great. And she put her mind to being great.”

It helped that Martha Karolyi, the legendary national team coordinator, invited Biles to her Texas ranch for some tough love. “She said, ‘If you haven’t been training too well, it comes back to bite you in the butt,'” Biles recalls. “She said, ‘Remember this, turn the page and know you are a good competitor.'” Karolyi, who is planning to retire after Rio, sees their talk as a turning point. “I could see in her eyes she was soaking in the advice, she was thinking about it, and she believed we could help her through this.”

Not even Karolyi, however, could fully tame Biles. The gregarious teen typically chatters throughout her training sessions (stories about videos she and Adria upload to YouTube are favorites) and giggles irrepressibly. At competitions, where gymnasts are usually stoic and focused just on themselves, she’s quick with a hug and a joke. The behavior alarmed Karolyi at first. “She was like, ‘Tone it down a bit,'” Biles recalls. “I don’t think she knew that was me in my zone.”

Karolyi had to relent. At Biles’ next meet two months later, the 2013 world championships, she blew past more seasoned gymnasts to claim her first world title, and she hasn’t lost an all-around competition since.

What happened? Biles, it turns out, is ideally suited for the current moment in gymnastics. After abandoning the perfect-10 top score in 2006, the sport adopted an open-ended model based on start value. The more difficult a routine, the higher its start value; the final score is a matter of deducting from this baseline. And no one has a higher start value than Biles. Among her weapons: the 2.5-twist Amanar vault (which McKayla Maroney nailed to help the U.S. win in London) and a sui generis tumbling run on floor exercise–a double layout with a half twist tacked on at the end–that is named after her. Such moves may lack the balletic elegance of the Nadia Comaneci era, but they are more challenging–and exciting to watch.

Biles’ dominance comes at a time when the competition isn’t what it used to be–shrinking funding and political instability have whittled away traditional powerhouses from Eastern Europe. Romania, which has won an Olympic team medal in every Games since 1976, failed to even qualify a squad for the team competition in Rio.

But Biles doesn’t exactly need the help. “Typically gymnastics careers have peaks and valleys, but Simone has blown that apart,” says Shannon Miller. “She’s like, You know what, I’m just going to hang out at the top, I’m good here.”

Biles knows that she’s in a good place–as long as she can handle the stress. “I have everything I need, and I don’t feel like there are any blanks in my life left unfilled,” she says.

Except, perhaps, for that Olympic gold medal. 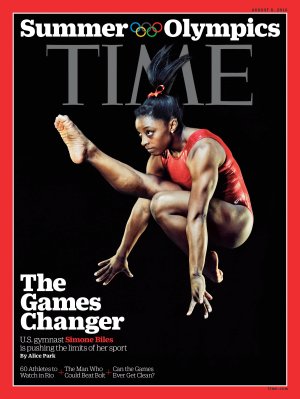