Chinese tourists make their way from the cruise ship Mangyongbong after docking at Mount Kumgang port in the first-ever cruise from Rason in North Korea on Aug. 30, 2011
Goh Chai— AFP/Getty Images
By Charlie Campbell / Dandong and Beijing

New Yorkers flock to ashrams in the Appalachian Mountains, Europeans to refurbished hermitages in the Umbrian countryside, but where do Asians go to get away from it all? Sure, there are Balinese yoga retreats and meditation centers run by Nepali beekeepers. But for a growing number of Chinese, the ultimate escape is the ultimate in oppression: North Korea.

To be clear, North Korea isn’t suddenly a land of milk-and-honey baths, and woe betide anyone who requests a chemical peel at a Pyongyang hotel. But a corollary of being the most isolated place on earth is utter sequestration from modern banes. And ever more Chinese visitors are making the short hop across the Yalu River out of curiosity, but coming back for the peace of mind they find.

“Without cell phone, computer or any modern communications, the feeling of isolation lets me find peace,” history teacher Bai Xuejiao, 28, tells TIME. “You can totally relax about the food safety there. North Korean food has no additives — even if they want to, they don’t have the technology to make them.”

Of course, Orwellian societal controls don’t lend themselves to a relaxing vacay, and the totalitarian regime of Supreme Leader Kim Jong Un isn’t known for its laissez-faire attitude even to holiday snaps — which, if taken of founding father Kim Il Sung’s statue, must be front on and well-framed. There are also serious ethical questions about funneling cash to what’s considered the world’s most repressive regime, under which 25 million people live under the imminent threat of “extermination, murder, enslavement, torture, imprisonment, rape, forced abortions and other sexual violence,” according to a 2014 U.N. report.

As such, organizing tours to North Korea remains a somewhat secretive industry, and none of the dozen Chinese tour operators contacted by TIME agreed to comment for this article. However, travel advertisements increasingly hone in on the nation’s natural splendor. “The sea by North Korea is 100% clean, you won’t see any garbage,” claims an advert for Yan Bian Century tourism agency. “The whole of Rason City [on the Sea of Japan in North Korea’s northeast] is an organic place. Beautiful, gentle and shy North Korean girls will give you the memory of a lifetime.”

Tourism dollars have taken on new significance for the Kim regime since March’s ramped up U.N. sanctions, which have made traditional methods of acquiring foreign capital — generally exporting coal and minerals — far trickier. From earlier this month, Chinese nationals can enjoy visa and passport-free half-day tours from China’s border city of Dandong to North Korea’s city of Sinuiju, which sits opposite the frontier. Already, 85% of all Chinese tourists to North Korea use this route. North Korea also has a plush ski resort at Masik Pass, boasting nine pistes, a luxury hotel, several well-heeled restaurants and a rental shop stocked with high-end gear — an attraction that only the country’s elites can afford.

Though it seems luxury is the opposite of what most visitors to North Korea are seeking. “I planned to make my son experience some hardship, but our North Korea trip gave me a new perspective,” posted one Chinese travel blogger. “Without wi-fi, we saw their simple lives and it eased our minds. We climbed the mountains and watched a waterfall. We are amazed by nature’s craftsmanship. It was truly natural and pollution-free.”

Other than pollution, food safety consistently ranks as a top concern among Chinese today, as an antiquated agriculture system struggles to feed 1.3 billion hungry mouths by adding more fertilizer to fields and cramming more hormone-pumped cattle into cages. This has led to a raft of food-safety scandals, and one of the greatest draws for Chinese visitors to North Korea is the perception that what they eat is chemical and additive-free.

“I trust food safety in North Korea as it is all organic,” says one Dandong-based Chinese trader who regularly travels all over North Korea. “I can feel the organic taste from potatoes and beans in North Korea, but in China you rarely get food like that. I find it cozy to occasionally live in North Korea for 10-15 days. The isolation makes me feel relaxed.”

Read More: What It’s Like to Be a Western Tourist in North Korea

To some extent, the North Korean government is even embracing the organic tag. In the existential quarrel with the South over which is the legitimate Korea, the Kim regime has traditionally gone toe-to-toe with Seoul regarding development, portraying itself as smog-clad industrial powerhouse of steel mills and whirring factories. However, with the growing dissemination of TVs, computers and DVD players, South Korean K-pop videos and soap operas have become popular (though still verboten) entertainment for North Koreans. Ever more are waking up to the fact that their socialist “utopia” lags far behind their southern brethren in the development stakes. Therefore, the regime has tweaked its propaganda tactics — instead portraying the North as a pure and natural alternative of the South’s quisling bubble economy.

For the Chinese, though, much of North Korea’s allure is its resemblance to a simpler China, harking back to a time before mass industrialization and commercialization, even if society shares much of the negative aspects of Mao Zedong’s much-maligned Cultural Revolution. “The idyllic scenery in North Korea is beautiful,” posted one user to China’ Twitter-like microblog Weibo. “When I saw the uniformed people riding bicycles, it feels like I travel through time and go back to the China just after liberation.”

Moreover, when compared with weekends in bustling Tokyo or Seoul, for Chinese, trips to North Korea offer a relatively inexpensive getaway. “Spending less money and feeling superrelaxed, for me North Korea is a good choice for a vacation,” says student He Zhengyu, 24. “I would encourage my friends to go there for a unique experience. It’s like time-traveling back to China’s past.”

— With reporting by Zhang Chi / Dandong and Beijing 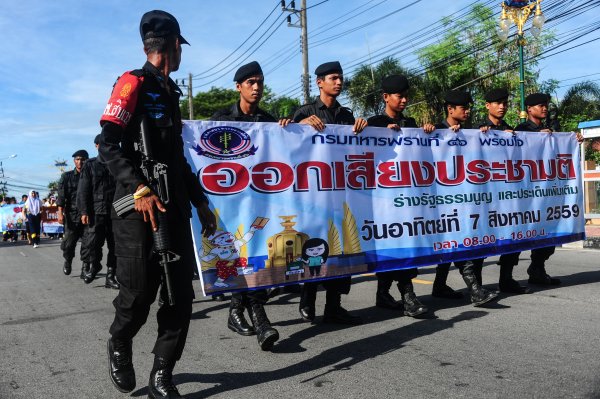 Thailand's Future Hinges on a Political Referendum
Next Up: Editor's Pick