As “Signed, Sealed, Delivered” played at the end of President Obama’s speech, Hillary Clinton emerged on stage. The former opponents touched foreheads and embraced before Obama put his arm around his former Secretary of State and led her to center stage.

The two history-making presidential nominees held hands and waved as the crowd cheered.

“Even in the midst of crisis, she listens to people. And she keeps her cool,” Obama said of Clinton earlier. “And no matter how much people try to knock her down, she never, ever quits. That is the Hillary I know.”

Obama’s speech lasted 45 minutes in primetime on the second to last night of the Democratic national Ccnvention. The first black president offered an optimistic vision for the future of America as he heartily endorsed the first female major political party presidential nominee. 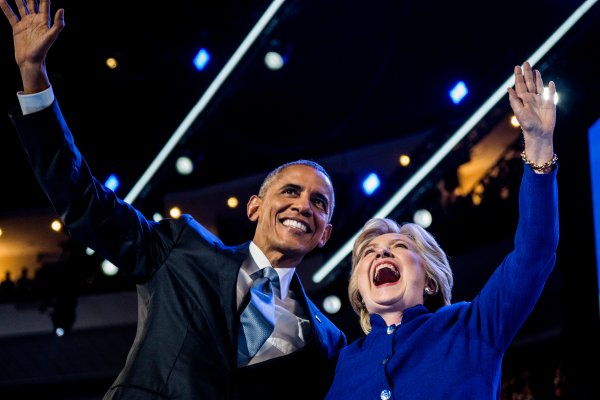 Democrats Aim for Optimism Amid National Gloom
Next Up: Editor's Pick