The Gentleman from Virginia: How Tim Kaine Undercut Donald Trump

Tim Kaine can’t match Barack Obama’s stage presence or soaring oratory. He didn’t electrify the convention hall like Vice President Joe Biden. Hillary Clinton’s running mate didn’t even get signs printed with his name on them passed out to delegates in the Democratic convention hall.

But the Virginia Senator’s speech Wednesday night showed flashes of why Clinton picked him to be Biden’s successor. Kaine was personable and friendly, clever with the turn of phrase and quick with the good-hearted chuckle. When he needed, he delivered the requisite barbs against Republican rival Donald Trump. Wednesday night’s speech will not be one for the history books, but it’s a signal of how he will spend the next 103 days of this presidential race.

Introducing himself to the party faithful in Philadelphia, Kaine’s folksy address wove together biography and policy with mockery of Donald Trump that dispelled suggestions that the mild-mannered gentleman from Virginia couldn’t play the role of attack dog.

Slipping easily into the Spanish he picked up as a missionary in Honduras, Kaine laid out a moral theory of government that united him with Clinton, and linked it to the better-known giants of his party. The speech also had snarky, slashing moments against Trump, who has vowed to build a wall with Mexico and round up immigrants who are in the U.S. illegally.

Kaine argued that he and Clinton were “compañeros de alma“—soul mates.

In Kaine, Clinton believes she has found a fellow soul: a native Midwesterner with deep faith in religion and government; a shrewd and careful thinker who wants to review all implications of every decision; another party insider in a year marked by outsider appeal. Most important, however, was Clinton’s confidence that Kaine could do the job of President should she be forced from the job.

“Tim Kaine is as good a man, as humble and committed a public servant, as anyone I know,” said President Obama, who included him on his own vice presidential shortlist in 2008. “He will be a great Vice President.”

Unlike Kaine’s debut speech last weekend in Florida, Wednesday night’s address had some sharper edges. In an extended riff, he blasted Trump as a self-interested fraud. “Our nation is too great,” Kaine said, “to put it in the hands of a slick-talking, empty-promising, self-promoting, one man wrecking crew.”

Later in the speech, Kaine slipped into his best Trump impression, which was unlikely to win him a role on Saturday Night Live but undercut Trump’s constant refrain that America should simply trust him, policy specifics be damned. “Believe me? I mean, here’s the thing. Most people, when they run for President, they respect you enough to tell you how they’ll get things done,” Kaine said. “Do you believe him?”

The room erupted in a chorus of “no’s.” And that was Kaine’s goal: keep chipping away at Trump’s credibility through a constant smile that makes him still seem like a good guy. That’s going to be the model going forward, starting with a bus tour through Pennsylvania and Ohio this weekend. “Folks, you cannot believe one word that comes out of Donald Trump mouth,” Kaine said. “Not one word.”

It was Kaine’s biggest opportunity to introduce himself to America, and he passed the cardinal test of vice-presidential politics: he did no harm. Over the next 14 weeks, Kaine will continue to grow in public’s mind as he gets into the groove of a presidential pace, which is unlikely any other campaign in the world.

There were even some moments where it was clear he will try to win over Republicans. “He’s still a Republican, but he’s voting for an awful lot of Democrats these days,” Kaine said of his father-in-law, former Virginia Gov. Linwood Holton. “He’s voting for Democrats because any party that would nominate Donald Trump has moved too far from his party of Lincoln.”

The first half of the speech lagged, at times leaving delegates restless as he recounted his life’s story. Scattered protest chants were a reminder that Kaine, a political moderate, will have to work to prove himself to liberals who are skeptical of his positions on abortion and trade.

“I certainly don’t agree with him,” says Sherri Stoddard, a delegate from Los Osos, California, who was on the nay side of the acclamation vote that nominated Kaine. “I feel as though it would have been a big statement for [Clinton] to have gone with someone who is more progressive.” All of this ignored statements in support of Kaine’s role from Planned Parenthood, NARAL and EMILY’s List.

But after the uneven start, the speech picked up toward the end with Kaine’s savage assessment of Trump’s honesty. This is part of the job.

Vice presidential picks are typically the designated attacker in campaigns, the person who can say what would be undignified for the presidential nominee to utter. Vice President Joe Biden was masterful at taking on first the McCain-Palin ticket, and then Romney-Ryan. John Edwards in 2004 was a worthy rival for Dick Cheney. And Al Gore’s asides during the 1992 and 1996 campaigns are case studies in snark.

But maybe time for those old roles to be be retired. Republican vice presidential pick Mike Pence is famously reticent to play the attack dog. Kaine can do it, but isn’t a natural fit for the job. And if there is one thing all Americans can agree about: 2016 is a cycle that is unlike anything we’ve ever seen before. Just ask the first female nominee of a major political party. 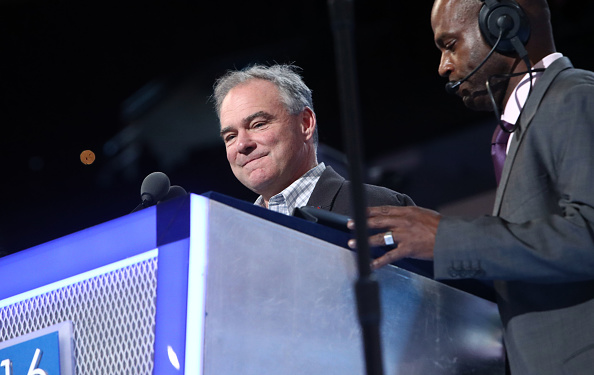