Wednesday night’s telecast of the Democratic National Convention was focused on what is “presidential”—in Hillary Clinton, and more importantly, not in Donald Trump.

Speakers included former New York City Mayor Michael Bloomberg, who endorsed Clinton despite a lack of affinity because he’s so uncertain about Trump’s abilities. Vice-Presidential candidate Tim Kaine, in a charming but not consistently steady address (one marked by frequent repetition of phrases in the exact same cadence, exact same cadence), indulged himself in a Trump impersonation. “Believe me,” he intoned, reciting yet another way in which Trump had proved mendacious. (The imitation was more MadTV than SNL, which is to say, not strong, but it proved Kaine’s willingness to go hard on the basic fundamentals of Trump’s morals in his role as attack dog.)

Joe Biden, whose ability to hold the camera would be nonpareil among American politicians were it not for his boss, repeatedly instructed the audience not to cheer or boo as he delved into what he saw as the inhumanity behind Trump’s “You’re fired” catchphrase. As stagecraft, it turned a rudimentary observation into a gripping theatrical performance.

President Obama’s speech, which made mention of Trump in order to carry across broader points about the greatness of the American project (and the ways in which Trump doesn’t fit into it), was effectively delivered. But as television, what preceded it was far more interesting. A video including the voices of (among others) former speechwriter Jon Favreau and First Lady Michelle Obama, leaned hard on the tough times of the Obama presidency, times—as after gun control measures failed after the shooting of schoolchildren in Newtown, Conn.—that Obama felt, in his own words used in the video, close to disgust.

It was a strange choice on first blush: Biden got a video paean, framing him as a relentless crusader for causes in which he believed and thus lending gravity to his words. Obama got a montage alternating truly low moments with moments in which his win was only conditional—sure, the financial crisis was averted, but it’s not a moment one particularly relishes reliving. Sure, Obama’s singing “Amazing Grace” at the funeral of the slain in Charleston, S.C., was moving, but it’s another reminder of his failure to achieve his gun-control goals.

That was exactly the point, cannily made. The presidency is hard and grinding, and Obama’s introductory video defined what “presidential” is. It’s less a manner of speaking or being (after all, if Trump is elected, the way he speaks will automatically be presidential) than a set of responsibilities one needs to complete.

Even some Trump voters can admit that it’s hard to imagine the real-estate developer, a man who’s easily roused to anger over Tweets, enduring what the video shows Obama enduring. The video was a dark reminder of the lowest moments of the past eight years. It was depressing, and pushed the broadcast deeper past the end of prime time on the east coast. That made it a success. For no video package could have more cannily made a case against the Republican nominee.

It went negative only about the demands of the job, leaving Trump—just as his detractors imagine he will be on the major issues if elected—entirely absent. 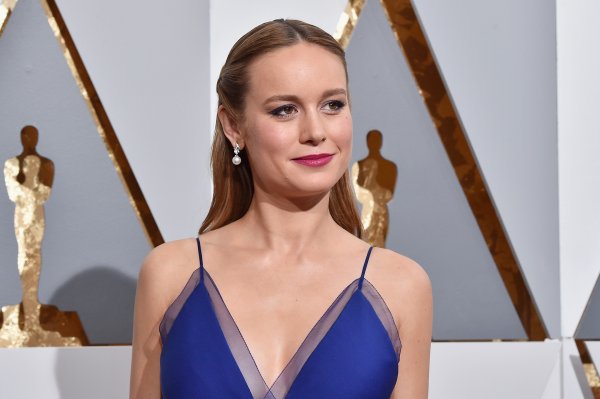 Brie Larson Opens Up About 'Nerve-Racking' Captain Marvel Reveal
Next Up: Editor's Pick