How Democrats Embraced Gun Control at Their Convention

Christine Leinonen, a former state trooper from Polk City, Fla., stood stricken onstage, struggling to read the words about her son on the TelePrompTer at the rear of the convention hall. Christopher “Drew” Leinonen died six weeks ago, along with his boyfriend Juan and 47 others, in the massacre at Orlando’s Pulse nightclub.

“Christopher was my only child, and as I used to tell him, you can’t do better than perfect,” his mother told the delegates at the Democratic convention in Philadelphia on Wednesday night. “Where was common sense the day he died? I never want you to ask that question about your child. That’s why I support Hillary Clinton.”

Leinonen struggled to speak those words, but they were carefully chosen. Common sense is one of the terms that gun-control lobbyists advise their clients and allies to use when framing their arguments about the fraught subject of guns, lest opponents weaponize their words.

Pollster Anna Greenberg, who works with the gun-control group Americans for Responsible Solutions, tells supporters to talk about “the gun lobby,” but not the National Rifle Association, which in many voters’ minds is about hunting and sport. Talk about closing loopholes, not about stricter gun laws. Talk about background checks, not a national gun registry. And never promise that anything is a fix-all or use the loaded phrase “gun control.”

“By using the right arguments and language to bring more Americans into our movement, galvanize our allies and fight back against the gun lobby, we can win this fight,” according to a strategy memo circulated to allies in Philadelphia this week.

This style of messaging played out in events around Philadelphia this week as Hillary Clinton prepared to accept her party’s nomination. Unlike other recent Democratic presidential campaigns, Clinton has made combating gun violence a signature issue. And in Virginia Sen. Tim Kaine, she picked a running made who is a longtime foe of the National Rifle Association, which called itself a civil rights group when the Republicans met in Cleveland for their convention.

“Tim Kaine is someone who has put gun violence prevention front and center,” gun-control activist Mark Kelly told reporters at a lunch this week. “It’s clearly not 1994 any more.” That was the year Democrats passed an assault weapons ban, only to pay the political price in disastrous midterm elections that helped Republicans retake Congress. Since then, candidates have tried not to provoke the powerful gun rights groups, even as there are more than 33,000 gun deaths every year and more than 130,000 shootings.

But in Clinton, gun-control activists think they have a champion for their cause. “In the White House, Hillary will stand up to the gun lobby,” said former Arizona Rep. Gabby Giffords, who survived a mass shooting in 2001 in her hometown of Tucson and is married to Kelly. “That’s why I’m voting for Hillary.”

Clinton’s team is betting the public’s thinking has shifted. High-profile shootings like Virginia Tech, Sandy Hook Elementary School and the Orlando nightclub have added to public anxiety, and allies see a political upside to taking on gun-rights activists. “People’s minds were certainly changed around Sandy Hook, but the cumulative effect of these tragedies is starting to increase the intensity of the attention we give this issue,” said Sen. Chris Murphy of Connecticut, one of the party’s leading voices against gun violence. Some 90% of Americans now support a strengthened background-check system. “If Hillary Clinton wins, she wins with a mandate on this issue,” Murphy told reporters on Tuesday. “And that’s the first time in 20 years that you have a presidential candidate run openly and strongly on the issue of guns.”

Dan Gross, president of the Brady Campaign to Prevent Gun Violence, says the political climate for gun-control activists is better than at any time in recent memory. “Finally this issue has become the defining issue that it’s always deserved to be,” Gross told TIME. “The gun lobby is much more of a paper tiger than people have long assumed. This is an issue where voters are prepared to hold our elected leaders accountable.” Look for anti-gun groups to use the same approach to House and Senate races, too.

For the first two nights of the Democratic convention, speakers were largely silent about the topic. That changed Wednesday evening. A procession of speakers—activists, celebrities and Americans who have lost family members to gun violence—took the podium in Philadelphia to issue wrenching pleas for tighter gun laws. Many of them deployed the language that pollsters like Greenberg advise.

The Rev. Jesse Jackson called Clinton a fighter who would “make us more secure by banning assault weapons that are turning our communities into killing fields.”

Erica Smegielski, a young woman from Connecticut whose mother was the principal at Sandy Hook and died in the massacre, told the hall that “what we need is another mother who’s willing to do what’s right. Whose bravery can live up in equal measure to my mom’s. What we need is to elect Hillary Clinton.”

The point was driven home again and again. And the message was clear: Gun regulation would be debate front and center in the 2016 election. 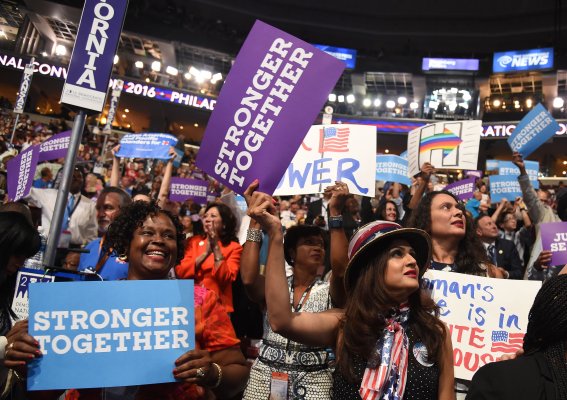 Stand On the Democratic Convention Floor With This 3D 360-Degree Video
Next Up: Editor's Pick