Protesters convene in Franklin Roosevelt Park outside the Democratic National Convention at the Wells Fargo Center on July 25, 2016 in Philadelphia.
Natalie Keyssar for TIME
By Jay Newton-Small/Philadelphia

Alfred Greve surveyed the crowd of about 300 protesters in front of Philadelphia’s City Hall Wednesday with satisfaction. “This is a very fertile clientele,” the 70-year-old said, clutching a large poster that read “Is this genocide?” with maps of a shrinking Palestine beneath. “Progressive-minded young people who care about our country and our people. You don’t get any better than that.”

Greve wasn’t the only one competing for disillusioned young minds. The square was full of disparate protests. What started out as a Black Men for Bernie Sanders protest had, in the wake of Sanders’ decisive loss of the Democratic nomination Tuesday night, morphed into a general platform for venting.

White Sanders delegates rose tearfully to express sadness, love, and pledges to continue fighting. Across from them stood a large crowd from the Revolution Club, a Black Lives Matters group, with their own competing bullhorns, calling for the police—and the government to “go to hell.” Interwoven were disparate protesters like Greve, attracted by the crowd and hoping to gain momentum for their causes.

For the most part, anger ruled in the heart of the City of Brotherly Love. Bruce Carter, the organizer behind Black Men for Bernie, accused Hillary Clinton of killing black people, suppressing their votes and silencing their voices. “We have to get rid of this corrupt two party system,” he said. “We will no longer tolerate the destruction by these parties who no longer work for us.”

Danielle Chapman came from Noblesville, Ind. to support Sanders. “Bernie didn’t really want to run for president because he’s not a narcissist,” she said, sporting a button that read “DNC, Go F— Yourself.” “So it’s up to us to keep the movement alive for him.” Chapman says she’ll likely vote for Green Party candidate Jill Stein, who came and addressed the crowd later that afternoon.

Revolution Club member Alan Arthur, 57, came from Cleveland to protest “the entire system. I’m anti- Bernie, anti-Trump, anti-Hillary. They all need to go,” he said. “Police killed my sister. The government is a bunch of killers. Blow it up.”

Clutching a massive placard of an aborted fetus, Michael Anthony said he didn’t want to blow up government, but he does want smaller government. “Socialism is anti-God,” he said. “I am here to convert these lost souls, to show them that only the church can heal the sick and provide health care. Socialism is the government’s attempt to replace God.”

“Jill not Hill,” the crowd began to chant in anticipation of Stein speaking.

“Are they saying, ‘Jail not Hell’?” another anti-abortion protester asked Anthony, somewhat incredulously.

Nearby, a man who identified himself as The Snake King of Philadelphia wandered by with his giant yellow python. “It’s $1 for a picture,” he called out. “I came for the crowd. These last two days, I saw the crowds on TV and I thought, ‘I’ll bring them some snake love from Philadelphia.’” In many ways “snake love” was the cheapest, and the happiest, thing being pedaled. 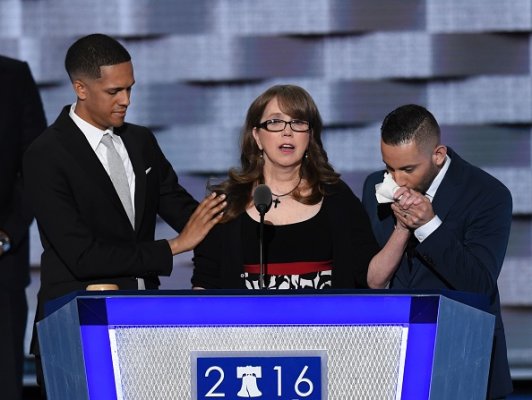 Read the Emotional Speech From an Orlando Shooting Victim's Mother
Next Up: Editor's Pick