Survivors and family of victims of the June shooting in Orlando will speak Wednesday night at the Democratic National Convention in Philadelphia to speak about gun violence.

The shooting by Omar Mateen left 49 people dead after he opened fire in Pulse, a gay nightclub, on June 12. Tonight, his mother, friend and ex-boyfriend will support Democratic nominee Hillary Clinton at the convention and call for gun safety legislation.

Leinonen will be a familiar face to people who watched ABC coverage of the shooting: She was one of the first to arrive on-scene, and in a heartbreaking interview told the world she was waiting to hear the fate of her son, Christopher “Drew” Leinonen. He did not survive.

“They said there’s a lot of dead bodies in the club. That it’s a crime scene. They can’t identify anybody. So it could be hours and hours before we find out,” Leinonen said at the time.

Wolf was one of Drew’s friends who texted Christine Leinonen the night of the shooting, when he saw Drew’s ex-boyfriend “had multiple gunshots and was being taken by the ambulance but he never saw Christopher [come] out. And we haven’t been able to call him or text him.” Wolf escaped because he was in the bathroom when the shooting began, the Orlando Sentinel reported.

Arriagada was also a survivor of the shooting and Drew’s ex-boyfriend. He remained close to him after they broke up, and called him his “first love.” The Sentinel reported they met in 2009, and Drew helped teach Arriagada English.

The Sentinel reported Drew, 32, was a gay-rights activist and one of the final victims of the shooting to be identified. His boyfriend, Juan Guerrero, was also killed in the incident.

Clinton visited the site of the shooting last week, the day she announced Sen. Tim Kaine as her running mate. 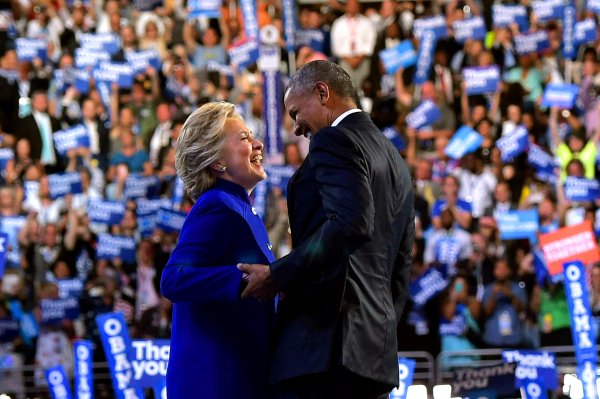 Obama 'Ready to Pass the Baton' to Clinton
Next Up: Editor's Pick