What Gabby Douglas and Simone Biles Mean Beyond the Olympics

When N’dey Lowe watched Gabby Douglas win gold in London’s 2012 Olympics, she decided she wanted to do gymnastics, too. Fast forward to now, and Lowe, 11, is doing floor and bar routines at a gymnastics program in Harlem.

“I wanted to be like Gabby Douglas,” said N’dey, who is from the Bronx. “She was so confident, like when she won the Olympics… I’m excited to learn how to do more advanced stuff, like backhand stuff on the beams.”

In 2012, Douglas made history as the first African-American gymnast in the world to win gold in the Olympics all-around event, in a sport that lacks diversity in the U.S., despite other standout gymnasts including Dominique Dawes, Betty Okino and Annia Hatch.

That’s why this year’s U.S. women’s gymnastics team is special. The team competing at the Rio Olympics—including two African Americans and one Latina gymnast—is especially diverse, offering inspiration to girls like N’dey who can watch young women who look like them competing for Team USA.

“When you see people like Gabby Douglas and Simone Biles, you know it’s not a one-time thing,” said Wendy Hilliard, a former gymnast who started the nonprofit gymnastics organization Wendy Hilliard Gymnastics Foundation where N’dey takes classes. “Gabby didn’t come from the traditional two-parent family that a lot of people come from. She gave a lot of hope. On top of that, Simone is an incredible athlete. Anyone will tell you she’s kind of special.”

After Douglas won the gold in 2012, enrollment spiked at the foundation, which today offers free or low-cost gymnastics classes to about 1,000 kids a year, most of whom are African American.

Hilliard started the foundation in 1996, almost two decades after she first began competing internationally in rhythmic gymnastics. Back then, Hilliard, who is from Detroit, was the only black member of the team, the first black rhythmic gymnast to represent the U.S. in an international competition.

She faced what she describes as her biggest setback several years later in 1983, at her third world championships, when she initially was not selected for the group gymnastics team even though she was among the top-ranked gymnasts. When she asked about it, her coach told her she “stood out” too much, she said.

“I was devastated, crying,” Hilliard said. “Everyone was quite shocked and was asking, ‘How come Wendy’s not on the team?’”

She was later able to reverse the decision after writing a letter to USA Gymnastics, the national governing body of U.S. gymnastics, but the moment was a turning point.

“I realized I had to be an advocate for the sport,” Hilliard said.

Now, her foundation, funded by donations and partnerships, aims to boost the dreams of other young girls, who want to see themselves at a future Olympics. Some of the gymnasts from Hilliard’s foundation have gone on to compete internationally, including Alexis Page, now a senior at Howard University. Page was a member of the rhythmic junior national team from 2009 to 2011 and of the rhythmic senior national team from 2011 to 2012.

Page was the only African American when she competed on the national team, and she said she only knows a handful of black girls who have also made it to the national level. She thinks more role models, whether that’s coaches or gymnasts on TV, would help.

“The Olympics team is so diverse,” Page said. “It’s showing kids that anyone can do gymnastics. Kids need those role models to know they can achieve something.” 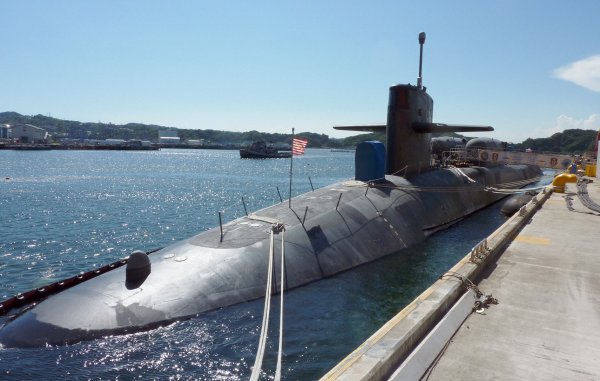 First Female Enlisted Sailor Qualifies to Serve on Submarine
Next Up: Editor's Pick