On Wednesday morning, Merriam-Webster announced that Donald Trump had done it yet again. After the Republican nominee appeared to suggest that Russia should commit a cybercrime against Hillary Clinton, the dictionary’s editors watched lookups for a single word spike in response to something Trump had done. This time there was a 76% increase for the term treason.

That’s not a word Trump used but one that social media users started tapping out in response to Trump saying at a press conference, “Russia, if you’re listening, I hope you’re able to find the 30,000 emails that are missing.” He also said he “hoped” Russia had the Democratic National Committee’s hacked emails. The Clinton campaign responded by saying he was encouraging “espionage.” Twitter meanwhile, reacted by invoking a word used to describe the act of committing crimes that help one’s enemies: The hashtag #TreasonousTrump was trending by Wednesday afternoon.

Trump has sent people running to the dictionary all election. During a debate in January, Trump caused a spike for the word bimbo (an attractive but stupid young woman) when he said he refused to use that word to describe Fox News host Megyn Kelly. That same month, Dictionary.com editors also saw lookups for the word pugnacious blow up because people were using that adjective—which means inclined to quarrel or fight—to describe the man who was describing many other people with terms like “loser” and “low-energy.”

Trump inspired many Americans to query the verb schlong after he said that Hillary Clinton had been the object of such an action during the 2008 primary. And he increased America’s vocabulary by accusing fellow candidates of “collusion” when they formed an alliance against him.

Among the words that Merriam-Webster has tracked, more have come from critics and pundits describing Trump than from straight Trump quotes. Philadelphia Mayor Michael Nutter gave radicalize a boost by accusing Trump of trying to radicalize Americans against Muslims by calling for a ban on Muslim immigrants. News consumers also wondered what it meant that, for a time, Trump did not “disavow” white supremacists, as well as what it meant when reporters described Trump as a “tycoon.”

Anti-Trumpers propelled lookups for trumpery, delighting in the word’s definition of “something fallaciously splendid.” Others did the same by calling Trump “puerile” (New York Times columnist), a “sniveling coward” (former adversary Ted Cruz), a “demagogue“ (scientist Stephen Hawking) and a man who used his convention speech to paint a “dystopian nightmare” of what life in America is like (late night talk show host Seth Myers).

As linguist Ben Zimmer says of the words that have been spiking this season, “they’re not rare words but they’re the words that might require a little unpacking.” And so it makes sense that most of them aren’t coming directly from Trump, whose much-beloved and much-mocked straight-talkin’ speech often hovers around the fourth-grade reading level. He has said outright that he’s not one for the kind of big, fancy words that might require a dictionary consultation (though he does reserve the right to know them).

“I used to use the word incompetent. Now I just call them ‘stupid,'” he said in December of describing the likes of Hillary Clinton’s State Department. “I went to an Ivy League school. I’m very highly educated. I know words—I have the best words. But there’s no better word than stupid.” The crowd in Hilton Head, S.C., erupted in applause. 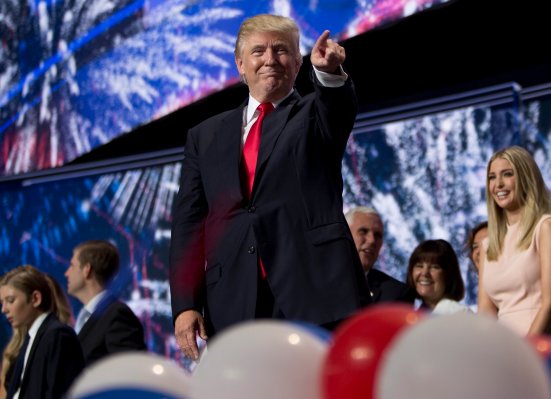 Trump to Russia: Hack Hillary!
Next Up: Editor's Pick