Hillary Clinton Haunted by Past Support for Trade Deals

Democratic presidential nominee Hillary Clinton’s delicate tap dance around foreign trade agreements is catching up to her as she prepares to accept the nomination of her party.

A longtime advocate for free trade, Clinton conducted an about face on the Trans-Pacific Partnership last year amid progressive pressure from Vermont Sen. Bernie Sanders.

The issue reignited late Tuesday as longtime Clinton family friend Virginia Gov. Terry McAuliffe signaled in an interview with Politico that Clinton would reverse course on TPP after the campaign.

“Once the election’s over, and we sit down on trade, people understand a couple things we want to fix on it but going forward we got to build a global economy,” he said. “Yes,” he added when pressed if she would ultimately support it. “Listen, she was in support of it. There were specific things in it she wants fixed.”

Clinton campaign chairman John Podesta tried to walk back McAuliffe’s gaffe first in a tweet Tuesday night and again the next day. “I can be definitive,” he told reporters Wednesday morning. “She is against it before the election and after the election.”

But the damage from the 12-hour controversy appears set to live on, feeding into lingering questions about Clinton’s trustworthiness as she seeks to reintroduce herself before the American people. McAuliffe’s implication was that Clinton only opposed the deal for the purposes of securing the primary, and now that it’s in hand, would reverse herself once again.

As Secretary of State, Clinton was an unabashed promoter of free trade agreements, along with the rest of the Obama administration. Her husband signed NAFTA, and she voted for a host of agreements during her time in the U.S. Senate. Of TPP, Clinton wrote in her book Hard Choices that, “its higher standards, if implemented and enforced, should benefit American businesses and workers.”

The politics of trade have roiled both Democrats and Republicans this year. Sanders’ rise as an opponent of trade agreements contributed to one of the most progressive platforms in Democratic history, which opposes a vote on TPP during the lame duck—an embarrassment to the popular Democratic president who negotiated it. Hundreds of anti-TPP signs have been displayed on the floor of the convention, and chants have rung out frequently. But not everyone is in agreement. As Bernie Sanders spoke out in opposition to TPP, former president Bill Clinton sat still or whispered into the ears of his seat mates, rather than join most of the arena crowd in applause.

Clinton’s vice presidential selection, Virginia Sen. Tim Kaine, was himself an outspoken proponent of TPP until just days ago, when he made a private commitment to the Clinton campaign to oppose it for the purposes of joining the ticket.

“Clearly there’s a divide since the president is pushing TPP and people like me will do everything we can to defeat TPP,” Rep. Debbie Dingell (D-MI) told TIME. “I’ve personally talked to Hillary on this and so has the [United Auto Workers’] Dennis Williams. Sure, Terry isn’t on the same page as I am but I’m sick and tired of China and other countries manipulating their currencies. It’s a bad [agreement].”

Across the aisle, the divisions are just as deep with the GOP—traditionally the more trade-friendly party—overtaken by Donald Trump’s protectionist calls.

Never mind that his own running mate has been a TPP supporter, Donald Trump jumped on McAuliffe’s comments in a tweet:

In a wide-ranging press conference Wednesday, Trump twisted the knife, accusing Clinton of only reversing her stance because of him.

“She saw me talking about TPP, currency manipulation, currency devaluation, she heard it and said you can’t bring that in a debate so all of the sudden she goes against TPP,” Trump said. “They will go toward TPP and vote it in very shortly after the election if she wins.” 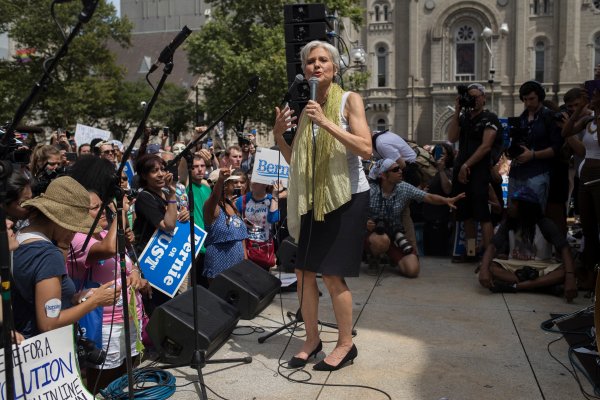 Meet the Green Party's Presidential Candidate
Next Up: Editor's Pick