Brazil's Dilma Rousseff on Her Impeachment Trial, the Olympics and Zika

As Rio de Janeiro prepares to host the Olympic Games, beginning on Aug.5, one person won’t be at the opening ceremony—President Dilma Rousseff. Rousseff has been suspended from her office amid charges that she manipulated government accounts, and her impeachment trial is scheduled to take place during the Olympics. She spoke with TIME’s Matt Sandy from the Brazilian capital of Brasilia, where she defended herself against accusations of corruption and promised that Rio would be able to pull off the Games despite a league of doubters.

How is the fight [against impeachment]?

I am being judged for a non-crime. What is happening [in Brazil] is not a military coup but it is a parliamentary coup. It is a coup of a process that is affecting the institutions, eroding them from the inside, contaminating them. So I believe this fight, it requires a weapon. We live in a democracy and respect democracy. The weapon in this fight is debate, explanation and dialogue.

You need 27 votes [in the senate to avoid impeachment]. Will you get them?

I have fought for this… and I have the conviction that I can win.

What is your plan if you return to power?

It is essential that we are able to reform the political system… We need a plebiscite [so that] the president on January 1, 2019 can lead the country in a better way… At the same time, we have a major challenge: Brazil has to grow again. And it has to grow again in a way that is not against the interests of the millions of Brazilians that have left poverty and entered the middle class.

Do you believe that the impeachment was sexist?

And you will continue to fight?

I’m absolutely sure. My entire life is a learning experience, learning that there is no way to live without fighting, in all circumstances. I learned to fight early, I struggled and bore the pain of torture, but I fought and survived well. Then I fought against cancer. I also think that with the help of medicine today, we win the fight against cancer. And I will fight this impeachment systematically.

What do you think about the security concerns about the Olympics?

There is a whole security structure in Brazil suited to the Olympic Games. And this structure for the Olympics was not built yesterday, or the day before yesterday. It has gone through various tests. One of these was the World Cup [of soccer in 2014] and it was clear that there was not a single problem.

…And the threat of the Zika virus?

Brazil is going through a time, in terms of temperature, that is very atypical. This means there will be fewer mosquitos carrying Zika. And also, I want to tell you, we did a great [public health] campaign… You can rest assured that there will not be a threat to public health from the mosquito that carries the Zika virus.

Was it a mistake to have the Olympics only two years after the World Cup?

I do not see why that would be a mistake. Because, in a way, we are taking advantage of economies of scale. When you prepare for a World Cup with matches in 12 states you create an infrastructure… all the security equipment and all the technology to facilitate the communication of [the event] to the whole world, a media center. We learnt from this. And so I tell you, I think it is easier to organize an Olympics having already organized a World Cup.

I think Brazil has all the conditions to return to play a bigger role… All countries of the world have gone through crises, well before us. The U.S. had a severe crisis in 2007, 2008, 2009, 2010… The E.U. was at risk of losing its currency, also with a very deep crisis. The crisis has now reached the emerging markets… But it was not the emerging countries that created the crisis. It is a crisis of the international financial system, and as we all know, one of the most serious since 1929.

Do you take responsibility for Brazil’s economic crisis?

How important is [corruption investigation] Operation Car Wash to the future of Brazil?

Will you go to the Opening Ceremony?

I was elected president with 54.5 million votes… They are inviting me to participate in the Olympic Games in a very secondary position… I will not play a role that does not correspond to my presidential status.

Will you be proud of Brazil when the Games begin?

I have and always will have pride in Brazil because I think we will demonstrate once again that we are capable of winning in the arenas, fields and circuits, as well as outside of them. 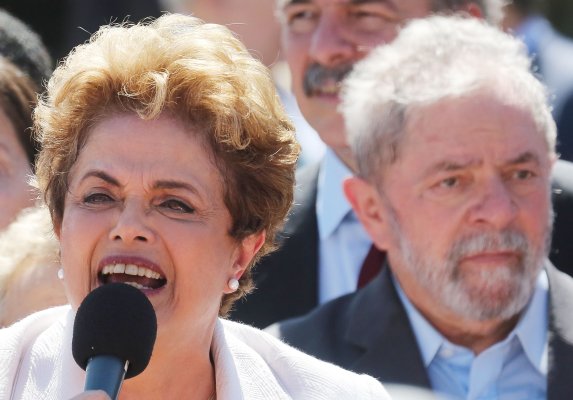