The Green Party candidate for president was riding a pickup truck outside the Democratic convention Monday when several of the supporters sitting behind her began chanting vulgar put downs of the Democratic presidential nominee.

“F–k Hillary! F–k Hillary!” the faithful yelled out of the truck. Stein’s spokeswoman and minder, thinking of the TIME reporter along for the ride, tried to hush the cussing. “Let’s do the ‘Jill, not Hill!’ chant instead,” she suggested politely.

But the chanters probably were closer to the spirit of Stein’s campaign the first time. Though she is a soft-spoken doctor-turned-activist, she is not running a sanitary campaign for president.

Instead Stein has fashioned herself as more of a dissident and soapbox champion than a politician. She calls Clinton a warmonger and Donald Trump a bigot, and won’t say which she believes to be worse. Last week she told a liberal blog that Bernie Sanders was taking his supporters into “the sh-thole” by endorsing Clinton. Her fight, and her army of button-wearers, microphone-wielders, are raging against the machine more than running for office. Her comfort zone is the liberal news circuit and the raucous public park rally, not the halls of political power.

Now Stein is seeking to claim the legacy of Bernie Sanders. She wants to inherit his liberal movement and destroy the two-party system. And she says she has a chance to win the presidency, despite her current place in the polls, at about 3% nationally. “We should have the strength of our convictions knowing we are not just a marginal footnote in the debate here,” Stein told TIME in an interview. “We can actually win this.”

Beneath the surface, Stein has little in common with Sanders. The Vermont Senator is a keen legislator with decades of political experience and a knack for winning elections. Even in defeat, Sanders forced Clinton to accept much of his agenda, counting his odds better with her than with Trump.

Stein will make no compromises. She has no experience in elected office besides serving as a small-town council member in Lexington, Massachusetts. Stein says she refuses to take part in a corrupt two-party system. She readily criticizes Sanders for dropping out of the presidential race and endorsing Hillary Clinton. “Bernie is setting an example of essentially abandoning ship,” Stein said.

Despite polling within the margin of error, the Harvard-educated doctor could have an outsized effect on the election and severely weaken the Clinton’s campaign against Trump.

Stein is actively targeting unhappy liberals in swing states like Ohio and Florida who might otherwise vote for Clinton. In the likely tight general election between Clinton and Trump this fall, those votes could make all the difference in delivering victory to Trump. In 2000, for example, Green Party candidate Ralph Nader earned 97,000 votes in Florida, where then-vice president Al Gore lost by 536 votes to George W. Bush. Most of Nader’s voters said if he hadn’t on the ballot, they would have voted for Gore.

No third-party candidate since the advent of the modern two-party system in 1860 has won a presidential election, and Stein has badly lost repeated runs for office in the past. The Green Party does not have any seats in state legislatures and holds only a handful of city council seats across the country.

Many of her policy ideas are so liberal that the majority of mainstream economists and analysts dismiss them out of hand. Among other things, she has called for 100% renewable energy by 2030, cutting military spending by 50%, replacing NAFTA and other free trade agreements, free college tuition and student debt cancelation, Medicare for all and ending combat operations against ISIS.

Other progressives have dismissed Stein as a distraction. “The Green Party cannot organize itself out of a paper bag,” said Neil Sroka, spokesman for the grassroots progressive group Democracy for America. “As a Bernie Sanders supporter, I’m offended that they think they are owed my vote despite the fact that they do not have a single federal office, they do not have a single statewide office in the country and they only have a handful of city council races.”

Still, Stein spent the days of the Democratic convention at demonstrations rallying support for her candidacy. She gave a speech in Franklin Delano Roosevelt Park in Philadelphia across from the Democratic convention at the Wells Fargo Arena. She connected with Sanders supporters disillusioned by their candidate’s endorsement of Clinton. And she preached to the disaffected who have embarked on an unending search for perfect ideological purity. “This movement with Bernie, it came up the mountain but together we will go up to the promised land!” Stein said to a crowd in downtown Philadelphia as a crowd shouted, “Jill, not Hill!”

She was met a wide array of voters there who promised to support her over Clinton. Even in the halls of the Democratic convention, some delegates angry over Sanders’ loss have said they may vote for Jill Stein. Clinton “represents corruption, and I can’t believe her,” Georgina McDonald, a Sanders delegate from Wheaton, Illinois, said emotionally after Clinton clinched the nomination on Tuesday. “I’m reserving my vote for Jill Stein.”

Stein’s current advisors, she says, include Princeton professor Cornel West, the liberal economist Richard Wolff, political activist Medea Benjamin and Cheri Honkala, an anti-poverty activist who is participating in a “fart-in” to protest Clinton’s nomination at the convention. (Honkala has ordered beans to feed delegates and protesters, aiming that the digestive results stink up the air around the convention.)

For Stein and many of her supporters, the coming election is not just a choice, it is a test. “We say forget the lesser evil, fight for the greater good like your life depends on it,” Stein said. “When we stand up with the courage of our convictions we actually have the critical mass we need to stand up for our future and take it back.”

But the Greens will have to turn a shoestring rebellion into a working campaign. When Stein and her chanting Green Party troupe drove their pickup truck out of downtown Philadelphia, the engine stalled at an intersection. The truck arrived at the Green Party office in a down-on-its-heels neighborhood and no one had the key to open the door. They went to go squat in a coffee shop instead, where they waited for the next rally.

With reporting by Diane Tsai in Philadelphia. 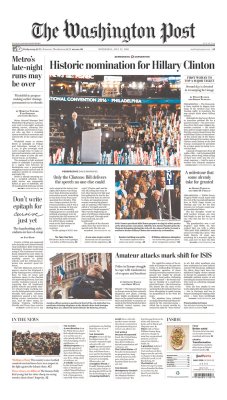 Why People Are Angry Newspapers Led Their Hillary Clinton Nomination Coverage With a Photo of Bill
Next Up: Editor's Pick