Bill Clinton Has Spoken Over 35,000 Words at Democratic Conventions

President Bill Clinton’s paean to his wife was his tenth consecutive address at a Democratic convention. It’s a streak that dates back to August of 1980, just days shy of his 34th birthday, when he was the youngest governor in the country. TIME was able to dig up the transcripts of those early speeches with the help of the Butler Center for Arkansas Studies at the Central Arkansas Library System.

Even across 36 years, there are some familiar themes and soundbites. Here is a brief rundown of the ten speeches from the notoriously long winded former president. Word counts are approximate since older transcripts cannot always be compared to audio of the speech. Conservatively speaking, they add up to at least 35,000 words, or more words than John Steinbeck took to write “Of Mice and Men.”

First elected as governor of Arkansas in 1978, Clinton was then the youngest governor in America. Like Jimmy Carter, he would lose reelection that fall.

Excerpt: “Those in this country that are alienated from us tonight are asking some very gnawing questions. They want to know why they should participate in a system that does not work for them. They want to know why, if they do vote, they should return to office a president and a party that has presided over a time of high inflation, high unemployment and lagging productivity. They want to know what is at the root of our misery, and what we as Democrats are going to do about it. They wonder if there is anyone in this whole land with a clear vision of where we are going.”

After losing reelection, Clinton re-won the statehouse in 1982 and returned the convention as governor once again. His speech was largely a tribute to the late Harry Truman, mentioning Walter Mondale only at the end.

Harry Truman would tell us to forget about 1948 and stand for what America needs in 1984. That’s the way to attract the millions of Americans who feel locked out and won’t vote because they think we’re irrelevant. That’s the way to attract millions more, mostly young and well-educated, who intend to vote against us because they think we have no program for the future.

Clinton was widely mocked for his 1988 introduction of Michael Dukakis, which ran 32 minutes–twice his allotted time–and sounded more like an acceptance speech than an set-up for the nominee. But he at least managed to test drive a few phrases that would becomes staples of his presidential campaigns.

“[Dukakis] is a builder who wants to build a bridge to tomorrow. A bridge strong enough to carry our heaviest loads. A bridge wide enough for all of us in this great country to cross together. A bridge long enough to take us into the 21st century.”

As the party’s nominee, Clinton joked that “I wanted to come back to this convention and finish that speech I started four years ago.”

“I learned a lot from another person too: a person who for more than 20 years has worked hard to help our children, paying the price of time to make sure our schools don’t fail them. Someone who traveled our state for a year, studying, learning, listening, going to PTA meetings, school board meetings, town hall meetings, putting together a package of school reforms recognized around the Nation, and doing it all while building a distinguished legal career and being a wonderful, loving mother.

“That person is my wife.

“Hillary taught me. She taught me that all children can learn and that each of us has a duty to help them do it.”

In accepting the nomination for a second term, Clinton used the phrase “bridge to the 21st century” 16 times.

“My fellow Americans, let me say one last time, we can only build our bridge to the 21st century if we build it together and if we’re willing to walk arm in arm across that bridge together.”

Clinton’s 2000 speech was as much a farewell as an endorsement of his vice president, Al Gore.

“I am here tonight, above all, to say thank you. Thank you for giving me the chance to serve. Thank you for being so good to Hillary and Chelsea. I’m so proud of both of them. And thank you for supporting the New Democratic agenda that has taken our country to new heights of prosperity, progress, and peace. As always, the lion’s share of credit goes to the American people – who do the work, raise the kids, dream the dreams.”

After Al Gore’s narrow defeat in 2000, Clinton made the case for John Kerry four years later.

“My friends, after three conventions as a candidate or a president, tonight I come to you as a citizen, returning to the role that I have played for most of my life, as a foot soldier in our fight for the future, as we nominate in Boston a true New England Patriot for president.”

Clinton’s delivered a comparatively short speech in 2008, after President Obama defeated Hillary Clinton in the primary.

“What a year we Democrats have had. The primary began with an all-star line up. And it came down to two remarkable Americans locked in a hard-fought contest right to the very end. That campaign generated so much heat, it increased global warming.

“Now, in the end, my candidate didn’t win. But I’m really proud of the campaign she ran.”

Clinton’s speech in Charlotte, in which he methodically laid out the case for the Democratic party’s stewardship, was arguably the best received of the convention.

“Now, people ask me all the time how we got four surplus budgets in a row. What new ideas did we bring to Washington? I always give a one-word answer: Arithmetic.”

Clinton’s tenth speech, on the day Hillary Clinton formally won the Democratic party’s nomination, took a narrative approach, outlining their courtship and life together against the backdrop of her lifelong devotion to service.

“The first time I saw her we were, appropriately enough, in a class on political and civil rights. She had thick blond hair, big glasses, wore no makeup, and she had a sense of strength and self- possession that I found magnetic. After the class I followed her out, intending to introduce myself. I got close enough to touch her back, but I couldn’t do it. Somehow I knew this would not be just another tap on the shoulder, that I might be starting something I couldn’t stop.”

With reporting by Lissa August. 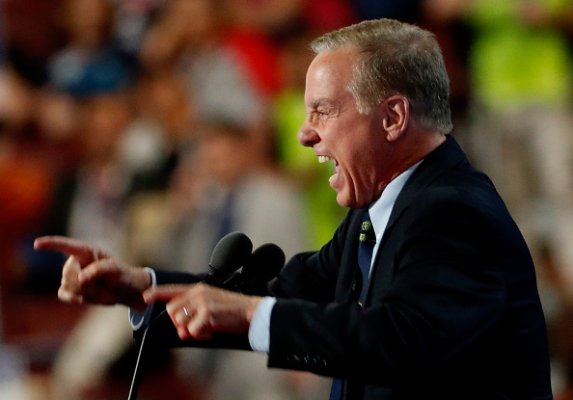 Watch Howard Dean Bring Back the 'Dean Scream'
Next Up: Editor's Pick