Bill Clinton Auditions for the Role of First Guy

Of all the thankless tasks that a political spouse must endure, the ritual of the convention speech is perhaps the worst.

Every four years, in front of a crowd of thousands and an audience of millions, the candidate’s spouse has to testify to their essential goodness, weaving the most personal anecdotes with broader campaign themes.

The fact that Bill Clinton was a practiced convention speaker with nine speeches under his belt already did not make his task easier Tuesday. If anything, it made it harder.

Those speeches were more straightforward affairs, endorsing the party’s candidate, arguing for his own campaigns, serving as “Explainer-in-Chief” for the platform. To testify on his wife’s behalf, Clinton had to unlearn some of those habits, and as the first man in his position on a major party platform, he had no role models.

His job was to humanize Hillary Clinton, to turn her from a cardboard cutout—“the most famous, least-known person in the country”—back into something relatable.

In 2008, Michelle Obama described Barack Obama as “the same man who drove me and our new baby daughter home from the hospital 10 years ago this summer, inching along at a snail’s pace, peering anxiously at us in the rearview mirror, feeling the whole weight of her future in his hands.”

In 2000, Laura Bush recalled that “Hop on Pop” was one of George W. Bush’s favorite children’s books, and told the Republican National Convention that “George would lie on the floor and the girls would literally hop on pop, turning story time into a contact sport.”

But Bill Clinton had a trickier task. He could not paint the first female presidential nominee as an anxious new mom without risking reducing her political stature. And he could not make broad proclamations about building a better future without sounding like he was running himself.

Instead he had to perform the kind of rhetorical alchemy that only a gifted speaker could pull off: turning the story of her success into the story of their love.

The crowd was largely silent as Bill Clinton cast his spell, conjuring up the image of a bright young go-getter and the hapless fool who fell for her. Bill dwelled heavily on the couple’s early courtship, painting a picture of a good-hearted, idealistic Hillary Clinton who swept him off his feet. She wore a flowered skirt and had big hair. He followed her to register for classes, even though he had already signed up. She took him home to Illinois to argue about the Bears and Cubs with her two brothers.

He also credited her—perhaps too much—for his own ambition, arguing that she had believed in him and pushed him into office. Through her work helping children and migrant workers, he said, “Hillary opened my eyes to a whole new world of public service by private citizens.” Whatever he had accomplished, he seemed to imply, was largely thanks to her.

“Let’s get back to business,” he said after he finished listing early examples of her do-goodery to return to his grandfatherly reminiscences. “Meanwhile, I was trying to get her to marry me.” The first portion of the speech focused not on any jobs or campaigns, but on his three marriage proposals to Hillary. He managed to spin an image of Hillary Clinton as both a superhero and an ingenue.

Then he elided more than a decade, skipping over his own presidency so that he could drill into her stints in the Senate and the State Department. Every mention of his own political career was couched as part of a personal narrative of their life together. If somehow you didn’t know that he’d been President in the 1990s, you might not have realized it from this speech.

Instead, Bill assumed the posture of an awestruck bystander who happened to be around while Hillary worked her magic. When they dropped Chelsea off at college, he recalls, “there I was in a trance staring out the window the window trying not to cry, and there was Hillary, on her hands and knees looking for one more drawer to put that liner paper in.” Unlike Michelle Obama or Laura Bush, he softened his spouse by opening up about his own vulnerabilities, not hers.

“She’s the best darn change maker I ever met in my entire life,” he said. “This woman has never been satisfied with the status quo in anything. This woman always wants to move the ball forward, that’s just who she is.”

In a particularly artful slight of hand, Bill Clinton compared this portrait of Hillary to the nasty caricatures painted by her enemies. “One is real,” he said, “the other is made up.” With one flick of a long, outstretched finger, Bill Clinton used the GOP’s attacks against Hillary to lend credibility to his own account. “A real change maker represents a real threat,” he said. “So the only option is to create a cartoon alternative, and run agains the cartoon.”

Delegates loved the idea of Bill Clinton as First Guy. “It’s never been done before, but based on how he did this, I think he’s gonna fill it with grace and grit,” said Judy Noel, a Hillary Clinton delegate from Florida. “He made her into such a warm, human and accomplished person.”

There’s an old line that everything Fred Astaire did, Ginger Rogers also did backwards and in high heels. Bill Clinton’s speech Tuesday was the male analogue. He had to do everything Michelle Obama and Laura Bush did, only standing straight while wearing a tightly knotted tie.

It was not easy, but by all accounts he pulled it off. 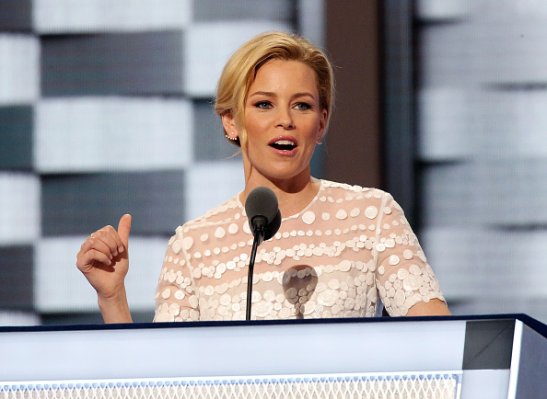 Watch Celebrities Sing 'Fight Song' at the Democratic Convention
Next Up: Editor's Pick