The stories piled up like love letters. The 9/11 survivor whom Hillary Clinton helped get medical care. The former intern whose legal career was launched through a Senate internship for foster kids. The young female politician who saluted a down-to-earth mentor who likes to binge on HGTV and Buffalo wings.

The official business on the second night of the Democratic convention was to formally crown the party’s nominee. Then the real work began. Inside Philadelphia’s Wells Fargo Center, the Clinton campaign trotted out a procession of character witnesses to testify about the candidate’s strength, kindness and tenacity. The tributes were meant to serve a simple, yet somehow perpetually elusive goal: humanize Hillary Clinton.

Clinton aides like to say that the cautious candidate the public sees is completely different from the woman her friends and allies know. “She is the most famous, least-known person in the country,” says Clinton campaign communications director Jennifer Palmieri. If there is an overriding task of the convention this week, it is to showcase the stories of citizens Clinton has touched across a sprawling life in public service.

This is a salient part of every convention: beyond the pageantry and protocol, the spectacle and the speeches, the goal is to paint a picture of a person the public is willing to watch perform from their living rooms over the next four or eight years. But it is an especially critical challenge for Clinton as she makes the turn toward the general-election battle against Donald Trump.

Supporters of Hillary Clinton cheer at the Democratic National Convention on Tuesday, July 26, 2016 in Philadelphia.
Ben Lowy for TIME

On the day that she became the first woman in history to be nominated for President by a major party, Clinton’s public image was as bad as it’s been. In a CNN poll conducted last week, 68% of respondents said the Democratic nominee was not trustworthy. A separate CBS News poll found almost identical figures. Every presidential campaign has its own hurdles to surmount, be they demographic or strategic or biographical. This is hers.

So the architects of the Philadelphia program didn’t skimp on the storytelling. They blocked out nearly all of Tuesday — and part of Monday — for testimonials from a diverse cast of ordinary Americans whom Clinton has helped over the years.

Lauren Manning, the 9/11 survivor, met Clinton while the former stockbroker was convalescing from burns. “Hillary showed up, she walked into my hospital room and she took my bandaged hand into her own,” Manning recalled, praising Clinton as “a hell of a tough person … kind, caring, loyal. She had my back. This is the Hillary Clinton I want you to know.”

The testimonials traced the arc of Clinton’s long career. There was Dustin Parsons, a fifth-grade teacher from Arkansas, who invoked the “Chelsea test: if it wasn’t good enough for her daughter, it wasn’t good enough for any child in America.” Kate Burdick, a lawyer from Philly, spoke of Clinton’s quiet crusade for juvenile justice. Jelani Freeman, the former Senate intern, talked about how Clinton handed him a lifeline after a childhood spent bouncing between foster homes, using a trash bag as a suitcase.

In a powerful scene, three bereaved black mothers offered haunting recollections about how Clinton had helped them grieve over the loss of their sons and daughter. “She doesn’t build walls around her heart,” said Lucy McBath, the mother of Jordan Davis, a 17-year-old black man murdered by a white man who objected to him playing loud music at a gas station. “Not only did she listen to our problems, she invited us to become a part of the solution, and that’s what we’re going to do.

“Clinton will help us protect one another,” McBath continued, “so that this club of heartbroken mothers stops growing.”

All these voices followed an opening night when organizers sought to put Clinton’s humanity at center stage. Anastasia Somoza, a former intern who was born with cerebral palsy, talked about meeting Clinton during a White House visit at age 9, the start of a mentorship that stretches across decades now. Jason Collins, the first openly gay player in the NBA, recalled coming out to Clinton before his teammates. Karla Ortiz, an 11-year-old from Nevada, described meeting Clinton at a campaign stop and telling the presidential candidate that she was afraid her undocumented parents would be deported.

Last of all on Tuesday night came the man who knows her best. Bill Clinton told the long, winding story of their courtship, from New Haven to Little Rock and finally to Washington. “My daughter had the best mother in the world,” he told the packed hall. “She’s insatiably curious, she’s a natural leader, she’s a good organizer, and she is the best change-maker I’ve ever met in my entire life.”

It was a carefully arranged series of testimonials that placed the pieces of Hillary Clinton’s life into the context the campaign wanted. Millions of people at home, and even many of the delegates in Philadelphia, were surely hearing such tales for the first time. The question for Clinton’s campaign is whether it will be enough to burnish the tarnished image of the most famous, least-known woman in the country.

— With reporting from Zeke Miller in Philadelphia 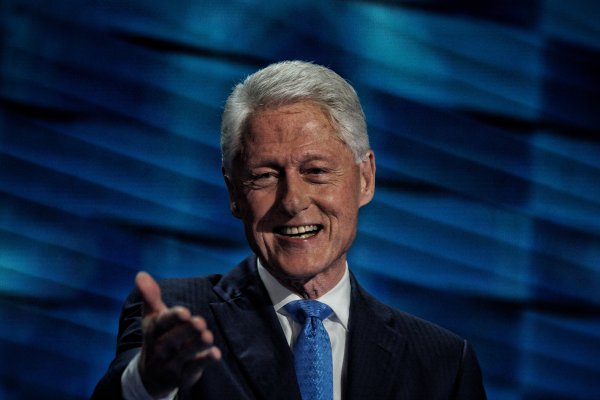 Read Bill Clinton's Speech at the Democratic Convention
Next Up: Editor's Pick