For Apple bears, there was plenty to feast on in the company’s latest financial report. Revenue fell again–this time by 15%–the first time since 2002 that Apple has faced two straight quarters of shrinking sales. Shipments of Macs, iPads and iPhones were all below last year’s figures. iPhones alone, which recently made up nearly two-thirds of Apple’s revenue, slid by 23%. Even worse, Apple said its revenue would fall year-over-year for a third straight quarter.

And yet the Cupertino, Calif. giant’s stock rallied 7% on the earnings report amid a sense that that things are looking more hopeful at Apple than they have in a while. Wait, what? Here are three key reasons why Apple’s results are not what they might seem at first blush.

The first is that all this bad news had long been expected. Apple’s stock has slumped 22% during the past year as investors braced for slower iPhone sales. iPhone generations have a two-year cycle, with the second year a lackluster one as loyal consumers await the next model. Apple also introduced the smaller, cheaper iPhone SE earlier this year, which dragged down the average sales price of iPhones to $595 from $660 a year ago (silver lining: this suggests the SE model was a hit).

The second reason is that Apple managed to do better than Wall Street’s dismal expectations. Despite a dwindling market share in China (where smartphone sales dropped 33%), iPhone sales saw impressive growth in Japan, India, Brazil and Russia. More new customers are switching to iPhones than ever, CEO Tim Cook said. All told, Apple squeaked above analyst’s revenue and profit estimates and forecast revenue in the current quarter at a midpoint of $46.5 billion, or a billion above the consensus estimate.

The third and most interesting reason for the rally lies inside the vague hints Cook gave about Apple’s future products in a call discussing earnings. Analysts parse such comments as closely as they would a central banker’s. Apple’s constant quandary is that it can’t, for competitive reasons, tip its hand on new innovations. It’s so good at keeping secrets that, when its revenue and stock price are on a down swing, things can look darker than they really are.

While Cook wouldn’t talk about features on a new iPhone expected to be released in September, he said he’s “very optimistic about the future” in part because of the iPhone’s large and loyal user base, underscoring an argument made by Morgan Stanley this week that pent-up demand for iPhone upgrades may create a “coiled spring” of demand this fall.

Asked about Apple’s interest in the augmented reality technology that spawned Pokémon-hunting hordes into city streets, Cook was a bit more forthcoming. “I’m sure developers will go for this over time,” he said. “Augmented reality can be really great, and we have been and continue to invest a lot in this. We are high on AR for the long run. It’s a great commercial opportunity.”

Another analysts probed at Apple’s hidden product pipeline by asking about the bump in recent R&D spending. Apple spent 4.4% of its revenue on R&D in the last nine months, up from 3.2% in the year-ago period. How much of that is for bold new products? “There is quite a bit of investment in products and services that are not current currently shipping,” Cook said. “You can look at the growth rate and conclude that there is a lot of stuff that we’re doing beyond the current products.”

In other words, be patient and see. Something new is indeed coming. Cook reminded doubters that Apple faced a similar attack of the bears right before the iPhone 6, which ended up surpassing even his hopeful expectations. One new product could be an Apple TV that is meatier than what the company introduced last fall. As Cook said, “Think about that release as building the foundation for what we believe could be a broader business over time,” including video-on-demand services built on top of a hardware device.

“You shouldn’t look at what’s there today and think we’ve done what we want to do,” Cook added. He was talking about the Apple TV, and yet that statement pretty much sums up where Apple is in the troubled summer of 2016. 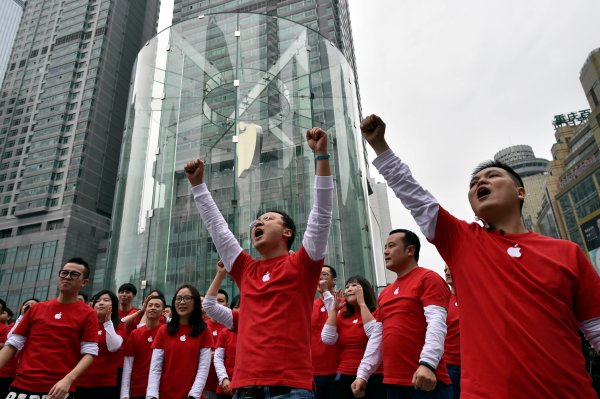 This Is the Most Alarming Number in Apple's Earnings Report
Next Up: Editor's Pick