Perhaps the last place you’d expect to find John Stubbs or Ricardo Reyes, two former George W. Bush administration officials and ardent Republicans who retired from politics years ago, is at the Democratic National Convention in 2016.

And yet here they are, posted up in a rented house in downtown Philadelphia, tirelessly promoting their grassroots organization, R4C16, which they launched last month with a singular goal in mind: to get their fellow Republicans to vote for Hillary Clinton in November.

“If you’d told me five years ago this is where I’d be today…” said Reyes, breaking into a laugh. He glanced across the kitchen table at Stubbs, who shrugged ruefully.

“Look, if the Republicans had nominated anyone else, we’d be voting for them,” Stubbs said.

In an interview Tuesday, both men appeared to struggle, almost physically, to describe their reasons for disliking Republican nominee Donald Trump, eventually arriving at a one-two punch. Trump, they said, is dangerous, not only to the free-market values of traditional Republicanism, but also to the security and integrity of the United States.

And the only reasonable alternative, they went on, is Hillary Clinton.

The point of launching R4C16, the explained, was to trumpet the idea to their fellow Republicans that it’s not enough to not vote. And it’s not enough to vote for a third-party. “That strikes me as petulant and irresponsible,” Stubbs said, “and a missed opportunity.”

“A protest vote in any other election would be fine,”Reyes agreed. “But this is too important. People need to put aside their personal feelings and look at what’s best for this country. The Republican leadership is right: this is a binary decision.”

Stubbs’ and Reyes’ decision to launch R4C16 nearly five weeks ago was a reluctant one. After meeting in the early 2000s, when both were working for the Bush administration—Stubbs as senior advisor to the U.S. Trade Representative and Reyes as a USTR deputy assistant for public and media affairs—both “happily retired” from politics, as Reyes put it, years ago. Neither had any interest in returning to the fray, but Trump’s nomination forced their hand.

“At first we were watching with amusement, and then with alarm, and then with true worry at what could happen here,” Reyes said. “Finally we came out and said, ‘We have to do something.”

So far, their efforts have been met with overwhelming encouragement, they said. “We’ve had hundreds of conversations with Republican officials—governors, members of Congress, senior staff to members,” Stubbs said. “We’ve gotten a lot of support.”

Both men were surprised by how many Republicans were willing to sign on, albeit quietly, to their campaign. “Out of two hundred people, I’d say only two told me to go fly a kite,” Stubbs said. “But 99% of the people we talked to, the support is there.”

The real challenge, the men acknowledged, will be taking that quiet support public.

Coming out in favor of Clinton is a “real risk” for Republicans whose livelihood depends on relationship within the party, they said. But if enough prominent Republicans sign on, there’s the potential to make waves. “There’s strength in numbers,” Stubbs said.

While both Stubbs and Reyes speak passionately in favor of Clinton now, it wasn’t a decision that either arrived at easily. Stubbs, partly in jest, suggested that many Republicans have to work through “seven stages”—of grief—before realizing they must, in good conscience, support the long-maligned Democratic nominee.

“I think the first step is realizing Donald Trump is clearly not a Republican,” Stubbs said. The next step is “doing the math,” he added: “A Donald Trump presidency is just too big of a risk. What is the alternative?”

Stubbs expanded on the point. “Electing Hillary Clinton provides a predictable, stable, glide path forward,” he said. That would give Republicans four years to “recuperate and draft a real statesman in 2020.”

“But if Trump wins, the Republican Party is dead,” he said.

Both men rejected the litany of arguments that establishment Republicans have made to justify their reluctant support for Trump: that his tempestuous personality will be tempered by the weight of the office; that he will be reined in by the checks and balances on government; that Republicans need him to nominate moderate Supreme Court justices.

“Trump has done nothing to suggest he would not rule as an autocrat,” Stubbs said. “He’s said he would use military to round up 11 million people. He’s said he will use the military to commit war crimes. When pushed on it, he says, ‘Believe me, they’ll do what I tell them to do.’”

While neither Stubbs nor Reyes wax eloquent about Clinton as a leader, both point at what they see as her relatively moderate legislative history and her willingness to “work across the aisle on the big issues,” as Reyes put it. Both also cheered Clinton’s decision last week to nominate Virginia Sen. Tim Kaine as her running mate.

A Clinton administration, they predicted, could reach compromises with Republicans on everything from reinvesting in infrastructure to reforming corporate tax repatriations, health care, immigration, and veterans benefits. Stubbs and Reyes are currently working with think tanks, policy wonks, and well-connected Republicans to create “a slate of positions, a policy agenda for Clinton, that if we have a big enough constituency we can move her towards,” Stubbs said.

Recently, Stubbs and Reyes sat down with folks from the Clinton campaign team, who were “very enthusiastic” about R4C16. “They offered us all kinds of help,” Stubbs said. “We politely declined.”

The point of R4C16, which as of now is funded entirely out of Stubbs and Reyes’ pockets, is not to become an arm of the Clinton campaign, he explained. The point is to keep Trump out of the White House.

“If we were still in politics, we’d get those questions all the time: ‘What’re your motives, what do you want to get out of this?” said Reyes, lowering his voice to impersonate an aggressive interviewer.

But he and Stubbs don’t have to worry about that, he said. They’re not in politics anymore. They have nothing to gain. And their motive is clear: elect Hillary Clinton as the only plausible way to keep Trump out of power. 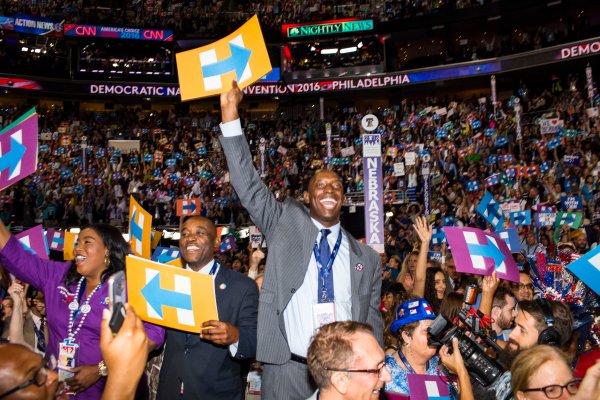