What Bernie Sanders Supporters Said in the Convention Roll Call

As the Democratic convention held a roll call vote on delegates, some Bernie Sanders supporters took one last opportunity to back their candidate.

As the Vermont Senator watched quietly from a seat with his state’s delegation, Sanders backers from various delegations made brief statements of support as they enumerated their state’s vote count.

As California cast 330 votes for Clinton and 221 for Sanders, some members of the delegation chanted “Sanders beats Trump.”

Larry Sanders, Bernie’s older brother, cast a vote for his brother as a member of Democrats Abroad. “It is with enormous pride that I case my vote for Bernie Sanders,” Larry said as he choked back tears. Bernie and his wife, Jane, shed tears as well.

Hawaii: “The man who inspired people all over this great land for a future we can believe in, we cast 19 votes for Bernie Sanders.”

A delegate from Illinois said, “Illinois proudly casts, for a true progressive and the father of a new political revolution, 74 votes for Bernie Sanders!”

New York cast 108 delegates for Sanders as Gov. Andrew Cuomo said his states “applauds him for his call for unity for all Democrats.”

Gov. Tom Wolfe of Pennsylvania said his state “awards 82 votes to Senator Bernie Sanders, whose fight for justice, inclusion and fairness has invigorated our party.”

After Vermont’s delegation reported its vote totals, Sanders took the microphone to call for the rules to be suspended and Clinton named the nominee by acclamation. 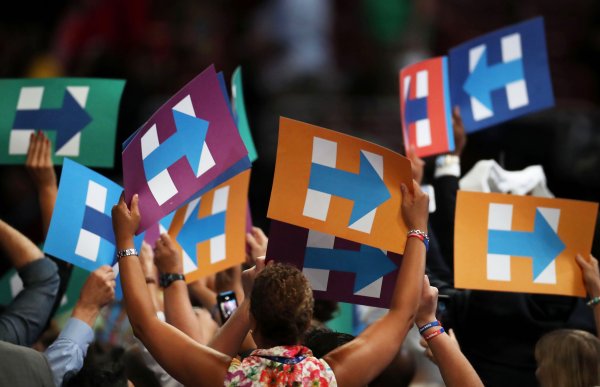