You may or may not know someone named Luca, but you owe your life to a Luca all the same. What’s more, so do we all.

That vital Luca is better known as LUCA—for “last universal common ancestor,” the very first, single-celled organism off the biological assembly line some four billion years ago that gave rise to everything that ever followed: bugs, birds, trees, kangaroos, and eventually big-brained mammals who wonder where they came from and invent acronyms to sort it all out.

LUCA has always been a broadly accepted theory, even if nobody could ever define just what our greatest of great grandaddies was like. Now, in a paper published in Nature Microbiology, a research team headed by biologist William F. Martin of Heinrich Heine University in Düsseldorf Germany, announced that it may have reconstructed a rough genetic blueprint of that long-vanished organism.

Martin and his colleagues started their work by studying the six million or so genes common to both bacteria and other single-celled organisms known as archaea—which are similar to bacteria but differ in shape, membrane chemistry, metabolism and more. Grouping those genes into categories defined by age, function and other characteristics, they came up with just 335 sequences that are thought to have the deepest routes in the bacteria and archaea lines—and, by extension, in all of the multi-celled organisms that followed. It was those 335, then, that formed the basis of LUCA.

It’s a perfectly reasonable conclusion so far, though that hasn’t stopped an academic cat-fight—a healthy if sometimes snarky part of scientific progress—from breaking out, with most of the debate centering on whether the organism had enough genetic robustness to qualify as a living thing yet or was only sort of quasi-alive. And no one knows either if this really is the LUCA, or just a LUCA, an early life form that was followed by something a tiny bit later.

But a larger and more important point has been lost in that kerfuffle, one that has implications not just for life on Earth but elsewhere in the universe. The 335 gene groups in the new paper show that the organism likely thrived in a gassy, metal-rich environment and may have had a high tolerance for heat—pointing to a survival niche in the vicinity of boiling sea vents on the ocean floor, which are known to be home to some modern species too. The temperatures there reach scalding highs of roughly 660° F (350° C), and while that’s too hot for any known type of life form to survive, any organism that did settle down in a place like that would not have to feel the full force of the heat.

“The organisms that live there are playing a careful dance,” said exobiologist Tori Hoehler of the NASA Ames Research Center in Moffett Field, Calif., in an earlier conversation with TIME about extreme life forms. “In those systems the temperature gradient between the water that’s coming out of the vent and the surrounding ocean water drops off so rapidly that things can associate themselves closely anyway.”

That matters a lot for people looking for life in space. Solar systems throughout the universe may well be filled with water worlds that are frozen solid on the outside, but warm and churning inside. Even without sunlight to warm the worlds’ interiors, the water remains liquid thanks to tidal flexing caused by the gravitational tugging of other planets or moons as they orbit nearby. Jupiter’s moon Europa is all-but certain to be home to such an ocean. Its sister moons Ganymede and Callisto might be as well, as may be Pluto, according to evidence gathered by the recent flyby of the New Horizons probe.

If the newly identified LUCA made its home around hot vents on Earth, similar things could happen on Europa and elsewhere. And life being as adaptive as it is, the other organisms wouldn’t even have to have the precise biochemical processes Earthly ones do in order to survive.

“Do they use light, do they breathe oxygen or hydrogen sulfide or things like that?” asks Hoehler. “They differ at the level of adaptations that allow them to survive that specific extreme.”

Chemistry, in other words, is chemistry, and while the ingredients vary dramatically throughout the universe, they interact in the same way no matter where you go. What happened on Earth, it’s increasingly likely, could easily happen anywhere. 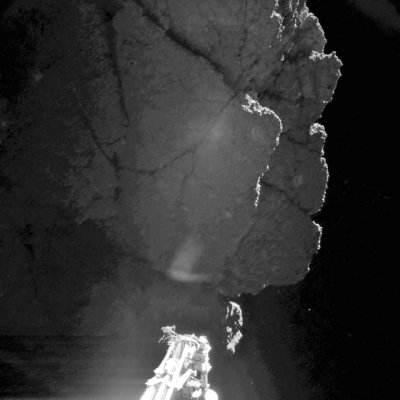 This Space-Exploring Robot Tweeted a Heartbreaking Goodbye
Next Up: Editor's Pick