Bill Clinton is no stranger to the Democratic convention stage. When he speaks Tuesday night, it will be his 10th consecutive time delivering a major address there.

He’ll make history as the first husband giving a speech on behalf of his wife as a major party nominee.

Clinton is known for going long and off-script, with results that either soar or falter.

Read highlights from his past convention speeches below.

Clinton was the nation’s youngest governor when he spoke on behalf of the Democratic Governors’ Association. During the well-received speech, he urged the party not to ignore the appeal of Ronald Reagan.

What he said: “I became a Democrat many years ago because of the values and the influence of my wonderful grandfather who ran a country store in a black neighborhood in a small town in southwest Arkansas. But I remain a Democrat today because of my love and concern for the welfare of my six month old daughter.”

After being bounced from office, Clinton returned to the governor’s mansion, sparking the “Comeback Kid” nickname he would later use to great effect. He received positive reviews for his speech on behalf of former Vice President Walter Mondale.

What he said: “We live in a time when millions of Americans believe that the Democratic Party’s greatest days are behind it, that we are no longer the party of progressive change. Harry Truman fought for change, for new ideas, for the future. He began the Democratic Party’s historic commitment to civil rights and brought the United States into peacetime cooperation with other nations.”

Then-Arkansas Gov. Bill Clinton took the stage in 1988 to endorse then-Massachusetts Gov. Michael Dukakis. It’s a half hour that Clinton could have used to propel him onto the national spotlight, but it fell flat as he meandered through the speech. People actually clapped when he said “in conclusion.”

What he said: “Michael Dukakis knows that working together works. He’s proved that again in this great convention because we’re here in unity and poised for victory. Mike Dukakis is a man with a vision, a shining vision for this country.”

This was the speech that showed Clinton learned his lesson about speaking at convention. Clinton took the stage at his own convention to accept the nomination and blew everyone away. He even joked about how bad his last convention speech was.

What he said: “In the name of all those who do the work, pay the taxes, raise the kids and play by the rules, in the name of the hard-working Americans who make up our forgotten middle class, I proudly accept your nomination for president of the United States. I am a product of that middle class, and when I am president you will be forgotten no more.”

Clinton’s 1996 speech was an opportunity for him to put his record on display for the nation. He used the metaphor of building a bridge to the future throughout his speech.

What he said: “We can only build our bridge to the 21st century if we build it together, and if we’re willing to walk arm-in-arm across that bridge together.”

This was the year that Al Gore, Clinton’s vice president, was nominated, so Clinton was able to personally vouch for him. This speech came after the Monica Lewinsky scandal, and he threw in a line at the end to keep building bridges and putting people first, “whatever you think about me.”

What he said: “I ran for president to change the future for those people. And I ask you to embrace new ideas, rooted in enduring values, opportunity for all, responsibility from all, and a community of all Americans.You gave me the chance to turn those ideas and values into action, after I made one of the very best decisions of my entire life: Asking Al Gore to be my partner.”

This was the first presidential election following the 9/11 attacks, so security was a high priority in Americans’ minds. It was also high on the Clinton agenda: Hillary Clinton was then serving as a New York senator.

What he said: “Americans long to be united. After 9/11, we all just wanted to be one nation. Not a single American on September the 12th, 2001 cared who won the next presidential election. All we wanted to do was to be one country, strong in the fight against terror, helping to heal those who were wounded and the families of those who lost their loved ones, reaching out to the rest of the world so we could meet these new challenges and go on with our democratic way of life.”

By the time 2008 rolled around, Clinton had earned himself a reputation similar to that of a rockstar at conventions. He was greeted with extended applause and chants. He drew parallels between himself and then Sen. Barack Obama as well as critiqued Sen. John McCain for embracing an unchanging Republican way of thinking despite loving his country as much as Democrats. This was one of Clinton’s shorter convention speeches, and it came after Obama beat Hillary Clinton in the primaries.

What he said: “Senator Obama’s life is a 21st-century incarnation of the old-fashioned American dream. His achievements are proof of our continuing progress toward the more perfect union of our founders’ dreams. The values of freedom and equal opportunity, which have given him his historic chance will drive him as president to give all Americans, regardless of race, religion, gender, sexual orientation or disability, their chance to build a decent life and to show our humanity, as well as our strengths, to the world.”

At this point, Clinton was an expected presence. He gave the nominating speech at Obama’s request and ran past his allotted time. His stage presence was Clinton at his finest, a testament to what a natural he is at giving a good speech, and some credit it with helping Obama get re-elected.

What he said: “I want Barack Obama to be the next president of the United States, and I proudly nominate him to be the standard-bearer of the Democratic party.” 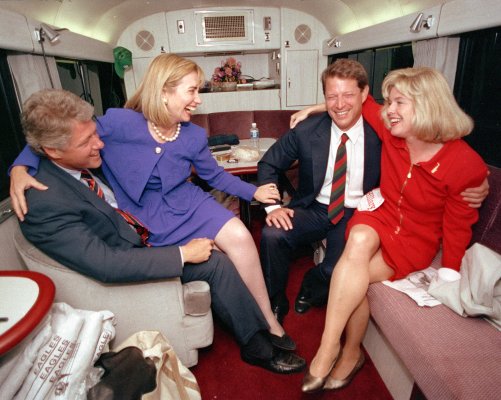 See Hillary and Bill Clinton's Political Romance in Photos
Next Up: Editor's Pick