'Hillary Clinton' Got Really Real In This Hilarious Medium Post

Fed up with email scandal upon email scandal, misogynistic GOP phrases and those unending chants of “lock her up,” parody “Hillary Clinton” took to Medium to vent. “Her” post, titled “Let Me Remind You F-ckers Who I Am” delves into Clinton’s political background to satirize the 2016 election.

“I’m Hillary goddamn Clinton. I’m a political prodigy, have been since I was 16,” the post states. It says that this election should be easy: “I have an insane network of powerful friends. I’m willing to spend the next eight years catching sh-t on all sides, all so I can fix this f-cking country for you. And all you little b-tches need to do is get off your asses one goddamn day in November.”

While the article will probably make you laugh, it offers up a heavy dose of opinionating about serious issues, pointing out that Clinton has risen to the top despite being in a largely male field. Congress currently consists of mostly men, with just 19.4% of senators and representatives being women. “Hillary Clinton” called the political system a place for “rich white dudes.”

While this article is clearly not the real Hillary Clinton, it echoes some of the real-life sentiment other leading Democrats feel for her. “Look, I know how hard this job can be. That’s why I know Hillary will be so good at it,” Obama said when he endorsed Clinton earlier this year. “In fact, I don’t think that there’s ever been someone so qualified to hold this office.”

Michelle Obama made a similar remark in her speech at the DNC: “What I admire most about Hillary is that she never buckles under pressure. She never takes the easy way out. And Hillary Clinton has never quit on anything in her life.” 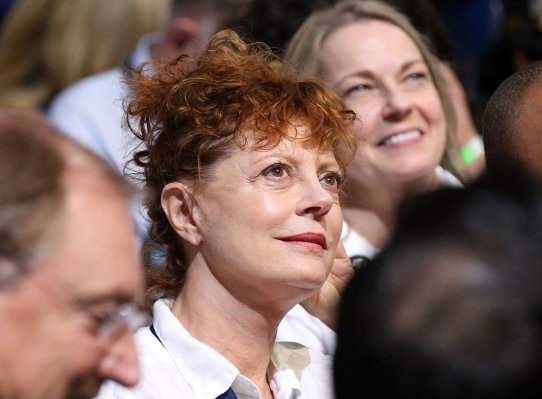 Susan Sarandon Does Not Care For the DNC
Next Up: Editor's Pick