Meet the Mothers Of The Movement Speaking at the Democratic Convention

Sybrina Fulton, Lesley McSpadden and other “Mothers of the Movement” will speak Tuesday night at the Democratic National Convention. These mothers of Trayvon Martin, Michael Brown, Eric Garner, Sandra Bland and other African-American men and women who died at the hands of police, in police custody or from gun violence will tell their stories to millions of Americans.

The focus on the Black Lives Matter movement and the deaths of black Americans at the hands of police is in contrast to the Republican National Convention, where speakers used the phrases “Blue Lives Matter” and “All Lives Matter.”

In four years since the last convention, the movement has grown from nonexistent to active in dozens of cities nationwide. Black Lives Matter protesters regularly lead marches all over the country, most recently after two black men were killed on camera in Minnesota and Louisiana. Some of these women have already appeared with Hillary Clinton on the campaign trail.

Meet the seven mothers who will speak at 8 pm at the convention:

Gwen Carr was a New York City subway driver until July 2014, when her son Eric was strangled to death by a police officer in Staten Island. Garner, 43 at the time, was approached by police officers who heard he was illegally selling cigarettes. The encounter escalated to the point Garner was in a chokehold on the ground saying, “I can’t breathe!” A video of Garner’s death went viral. The city settled out of court with the family for $5.9 million.

Garner’s death turned Carr into an activist. When a grand jury decided against indicting the police officer who put Garner in a chokehold, Carr protested in December 2014 with thousands of people who took over the Brooklyn Bridge. “He has no regard for human life if this is the way he treats suspects,” she said then. Carr endorsed Clinton in January.

Gwen Carr, mother of Eric Garner, whose child was killed due to gun violence, speaks during a Hillary Clinton for South Carolina "Breaking Down Barriers" forum on Feb. 22, 2016.
(Mark Makela—Getty Images)

The Trayvon Martin case captivated America in the summer of 2012. The black teenager was shot by George Zimmerman, the community watch coordinator for the gated community Martin was staying in. Zimmerman found not guilty of murder in Martin’s death.

Fulton used Martin’s death as a catalyst to fight for change. In 2014, she wrote a letter for TIME counseling Michael Brown’s family in the wake of his death in Ferguson, Missouri. She and Martin’s father have started the Trayvon Martin Foundation. She has spoken across the country about the loss of her son. “Unless you have lost a child, you don’t know this side,” she said on ABC Tuesday morning.

Activist Sybrina Fulton participates in a panel conversation at the Manifest:Justice pop-up art space on May 6, 2015 in Los Angeles, California.
(Amanda Edwards—WireImage)

Dontré Hamilton, a paranoid schizophrenic, was sleeping on a park bench in Milwaukee, Wisconsin. After a call to police that Hamilton was disturbing the peace, a police officer attempted to pat him down. The incident escalated and culminated with the officer shooting Hamilton 14 times. The officer was not indicted — the district attorney said the shots were justified — but was fired from the department for an illegal pat down of someone who was mentally ill.

Following the death of her 31-year-old son in 2014, Hamilton created Mothers for Justice United. She has led marches nationwide to draw attention to gun violence and police shootings of African-Americans. She has appeared with Clinton at campaign events. A year after her son’s death, Hamilton told BuzzFeed the pain of her son’s death is still strong. “We used to get together every weekend. We were cooking, dancing. Now we take the time to comfort each other.”

Maria Hamilton, mother of Dontre Hamilton, whose child was killed due to gun violence, participates in a Hillary Clinton for South Carolina "Breaking Down Barriers" forum on Feb. 22, 2016.
(Mark Makela—Getty Images)

In 2012, Jordan Davis and his friends were playing music out of their car in Jacksonville, Florida. Unhappy with the volume, Michael Dunn, a 47-year-old software developer, told Davis to turn the music down. The ensuing argument led to the death of the 17-year-old after Dunn fired 10 bullets into the car. He was convicted on multiple counts in 2014 and sentenced to life in prison plus 90 years.

Lucy McBath, Davis’ mother, forgave Dunn in an emotional public statement during his trial. “I choose to walk in the freedom of knowing God’s justice has been served. … I pray that God has mercy on your soul,” she told Dunn. Since then, McBath has spoken out against gun violence around the country — including during a February event with Clinton in South Carolina.

Lucy McBath, mother of Jordan Davis, who was killed by a man who claimed self-defense but was later found guilty of murder, speaks during a Hillary Clinton for South Carolina "Breaking Down Barriers" forum on Feb. 22, 2016.
(Mark Makela—Getty Images)

“Ferguson” has become a term synonymous with police killings of black men and protests. It refers to the St. Louis suburb of Ferguson, where Michael Brown was shot in 2014 by a police officer. The officer said Brown, then 18, fought with him before running away. Brown’s death and the lack of indictment for the officer who killed him led to widespread protests in Ferguson. Businesses were burned and protesters filled the streets for days.

Through all the national attention on Ferguson, Lesley McSpadden has demanded justice for her son and an end to police killings of unarmed black men. McSpadden was taking a smoke break from her job at a grocery store when she heard Brown had been killed. She released a book in May about Brown’s death and the aftermath, saying she wants readers to know “what a sweet person he was and how gentle he was and that he always tried to do the right thing.”

Hadiya Pendleton performed with her school marching band in January 2013 at Barack Obama’s second inauguration. A few weeks later, Pendleton, then 15, and a group of her friends were shot at a mile away from Obama’s Chicago home. The honors student at one of the city’s top high schools died.

Cleopatra Cowley-Pendleton has spoken out against gun violence ever since. She has joined Everytown for Gun Safety and wrote a New York Daily News op-ed in January that supported Obama’s gun reform efforts. I was honored to stand with President Obama earlier this week as he announced he would take executive action to help reduce gun violence and save lives in cities across the country,” Cowley-Pendleton wrote. “This action was especially meaningful to me because at the end of this month, it will mark three years since my precious 15-year old daughter Hadiya Pendleton was shot and killed in a Chicago park.”

Sandra Bland failed to signal a lane change in July 2015, so a Texas police officer pulled her over. Bland questioned why he pulled her over, so he asked her to get out of the car and eventually used force to put her on the ground. Bland was taken to jail and died there. Police say Bland committed suicide, but her family believes officers may have been involved in her death because she was not suicidal.

Over the past year, Geneva Reed-Veal has spoken at Clinton campaign events, the Library of Congress and elsewhere about her daughter’s death, joining the growing movement of mothers whose children were killed by or in policy custody. “I don’t come to sit and be a part of a caucus where we talk and do nothing,” Reed-Veal told congressional leaders in April. “I leave you with this: it is time to wake up, get up, step up, or shut up.” 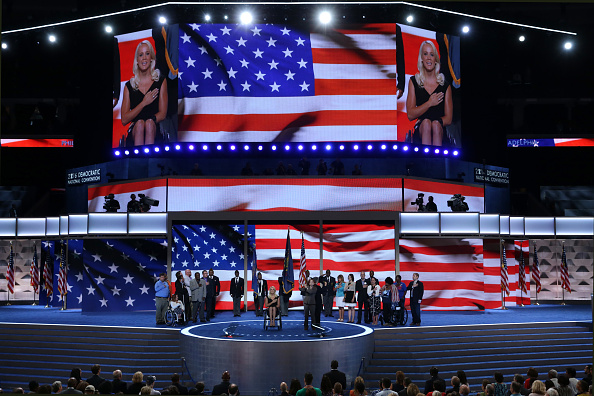 Meet the Speakers at the Democratic Convention Tuesday
Next Up: Editor's Pick