What Comic-Con Tells Us About the Presidential Election

Attendees at the RNC, left, and at Comic-Con, right.
Daniel Acker, Araya Diaz—Getty Images
Ideas
By Norman Pearlstine
Pearlstine is a former Time Inc. editor-in-chief and the author of Off the Record: The Press, the Government, and the War Over Anonymous Sources

After three nights in Cleveland with Donald Trump at the RNC, I awoke early Friday and flew to San Diego for what my wife dubbed a weekend “palate cleanser” at Comic-Con International before soldiering on today to the DNC in Philadelphia.

Comic-Con is marvelous and important. More than 150,000 fans, many in costume, come to the San Diego convention center every summer to celebrate the growing number of movies and TV series based on their favorite comic book or other fictional characters. New shows such as ABC’s Time After Time and video games such as Street Fighter Nation compete for attention with established hits such as Game of Thrones and Star Wars.

The big surprise—given the reality show that is the 2016 election—was that it was almost impossible to find a fan in costume who had anything to say about presidential politics. Ask a Poison Ivy or a Princess Leia to pick between Trump and Clinton and the most common answer was, “Who?” or “Who Cares?”

Such indifference from a predominantly young, diverse crowd is especially troubling for the Clinton candidacy. Trump’s strategy, on full display in Cleveland, is to play to his base, content to expand it on the margins while putting most of effort into getting as high a percentage of his supporters to show up on election day. Clinton, in contrast, needs to get Hispanics, African Americans, young women and the Sanders supporters to pay attention and then go to the polls.

Dystopia is a common theme to all three events. In Cleveland, it is imminent. In San Diego, it is entertainment. And in Philadelphia, it is a force to be overcome. 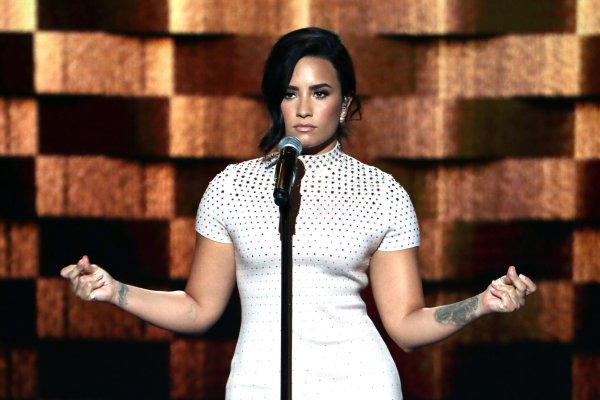 Demi Lovato to DNC: 'I Am Living With Mental Illness'
Next Up: Editor's Pick