The Democratic Convention Has an Awkward First Night Telecast

The success of last week’s Republican National Convention television broadcast was its build in intensity, over the course of the week, towards a single and sustained argument—that Hillary Clinton was unqualified for the presidency, and Donald Trump was exactly the man for the job.

The amount of buy-in from the audience in Cleveland radiated through the screen, allowing even a candidate as prone to digression as is Trump to stay roughly on-message. The one divergent part of the week, Ted Cruz, was chewed up on camera by the audience’s boos, converting a moment of potential anti-Trump sentiment breaking through into a show of Trumpian strength.

The mood in the room may be great, but on TV, the Democrats would seem to have substantial work to do to seem similarly unified in Philadelphia. It was very hard to know from home quite how many people in the audience were unhappy, but unhappy they were, with boos and chants haunting the convention’s first night.

The broadcast got weird early on, when the comedian Sarah Silverman, onstage with Sen. Al Franken to introduce a musical performance by Paul Simon, was apparently asked to vamp to give Simon a bit more time. She chose to address the vocal supporters of the candidate Clinton had grindingly defeated this cycle. “To the ‘Bernie or Bust’ people,” Silverman said, “let me just tell you, you’re being ridiculous.”

A comic who’s made a career of frank and at times uncomfortable straight talk was a strange pick to leave without a script, not least when the climate in the room seemed so ripe for remarking upon. Throughout the evening, speakers were competing, at least in CNN’s audio mix, with delegates and attendees apparently unhappy with what they were hearing. There was little contextualization, on-air, for how meaningful this contingent was, so Silverman’s singling them out specifically to bait them made the group seem crucially important, and made them shout all the louder.

Silverman’s riposte to a room that contained at least a few members already verging on hostile only seemed to deepen the divide. Franken, onstage with her, showed that he really is more politician than comic now as he allowed what looked like genuine dismay to flash across his face. Someone involved in convention planning is surely kicking themself that, seeing Simon running late, they didn’t just allow Silverman to complete her anodyne planned remarks and put on a taped video piece before the Simon performance—which, in an overlong night of TV, was a non sequitur anyway.

The evening came to include a real attempt at bringing together Sanders and Clinton’s supporters in the form of Sanders’s address, which was delayed for a few minutes. But that speech, which only arrived at its pro-Clinton conclusion after an introduction that included Sanders telling the crowd that “no one is more disappointed” by the election’s outcome “than me,” ended after 11:20 p.m. on the East Coast.

Watching up until that point, one felt every minute of the broadcast—including the particularly long speeches of Senators Cory Booker and Elizabeth Warren. Booker’s attempt at uplift felt, in light of the boos of the crowd peppering the broadcast version, a bit ginned-up; we could have no idea, watching at home, if his rousing conclusion roused anyone but himself. (A merciless reaction shot on CNN showed Bill Clinton, a politician whose first big national spotlight was a famously overlong convention speech in 1988, with his mouth hanging agape.) And Warren was surprisingly halting before the cameras in light of her crusading anti-Trump Twitter persona this election cycle. It’s very possible to imagine Sanders’s potential audience having faded away before his point was made.

It’s easy to list the ways in which Trump flouts established political norms, but hard to find a new way in. Booker’s and Warren’s speeches felt as though they were putting forward charges that have already been made, and answered by an electorate and polling base that doesn’t care. This may be why Michelle Obama’s speech was the evening’s most effective—a speech during which she never mentioned Trump by name, citing her family’s policy of rising above “bullies.”

“When they go low, we go high,” she said. It’s a sentiment that even a sound mix that tended to find protesters couldn’t interrupt, and her speech’s relentless focus on Trump as potential role model for American children (all without saying his name!) was artful.

But it’s hard to know whether “going high” is a strategy that’s workable for political figures of even slightly less political skill than the incandescent First Lady, particularly on an evening whose rough edges revealed less a set of facts than a vague sense of unease among the Democrats. Sanders said he looks forward to his supporters casting their votes in the convention’s roll call. Maybe that will provide some more clarity for television viewers on the true feelings in the room. 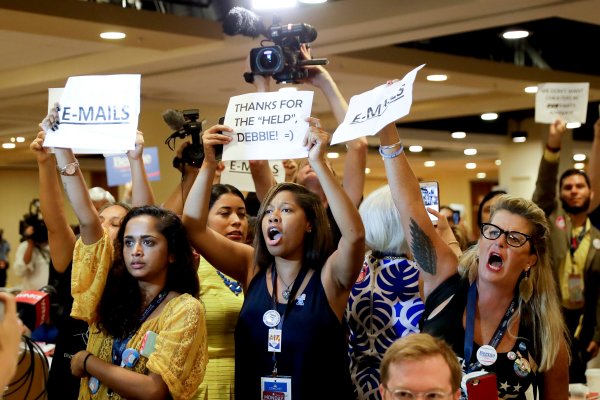 Seven Things That Went Wrong at the Democratic Convention
Next Up: Editor's Pick