Elizabeth Warren got stuck with the toughest job in Philadelphia on Monday night: following Michelle Obama at the podium. But the firebrand senator from Massachusetts delivered a denunciation of Donald Trump that reminded the Democratic faithful why so many of them had dreamt of an all-woman ticket.

In her keynote address Monday night, Warren turned one of Trump’s signature attacks against him. The Republican nominee often casts himself as the last hope to fix a rigged political system. Yet in Warren’s telling, the billionaire developer was the puppet-master pulling the strings, using divide-and-conquer tactics to pit people of different classes, creeds and colors against one another to preserve his place at the top.

“That’s Donald Trump’s America,” Warren said. “An America of fear and hate. An America where we all break apart. Whites against blacks and Latinos. Christians against Muslims and Jews. Straight against gay. Everyone against immigrants. Race, religion, heritage, gender, the more factions the better.”

Blending economic populism and pithy attack lines, Warren painted Trump as a cynical opportunist “who has never sacrificed anything for anyone, aman who cares only for himself—every minute of every day.” She framed him as a man who rooted for a Wall Street crash to boost his own bottom line and substituted fear for substantive policy in his campaign. “Other than talking about building a stupid wall which will never get built,” she asked, “did you hear any actual ideas?”

“Let’s face it: Donald Trump has no real plans for jobs, for college kids or for seniors; no plans to make anything great for anyone except rich guys like Donald Trump,” Warren said. “Trump’s entire campaign is just one more late-night Trump infomercial. Hand over your money, your jobs, your children’s future, and The ­­­­­­Great Trump Hot Air Machine will reveal all the answers.”

“And here’s the really ugly underside to his pitch,” she added. “Trump thinks he can win votes by fanning the flames of fear and hatred. By turning neighbor against neighbor.”

On the other side of the equation was Hillary Clinton: “one of the smartest, toughest, most tenacious people on this planet,” Warren said. “A woman who fights for children, for women, for health care, for human rights, a woman who fights for all of us, and who is strong enough to win those fights. We’re here today because our choice is Hillary Clinton. I’m with Hillary.”

But it was a marker of how sour the mood was on the first day of the Democratic convention that such glowing sentiments were periodically greeted with jeers. “We trusted you!” some delegates cried.

Warren pressed on, rousing the crowd with fiery broadsides against congressional Republicans who, she said, had blocked policies that would have fattened the pocketbooks of working people.

“To every Republican in Congress who said no—this November, the American people are coming for you!” she cried. “And where was Donald Trump? In all these fights, not once did he lift a finger to help working people. Why would he? His whole life has been about taking advantage of that rigged system.”

The critique drew a swift response from its target. “Elizabeth Warren, often referred to as Pocahontas, just misrepresented me and spoke glowingly about Crooked Hillary, who she always hated!” Trump tweeted shortly after Warren wrapped up, referencing his nickname for the Senator. 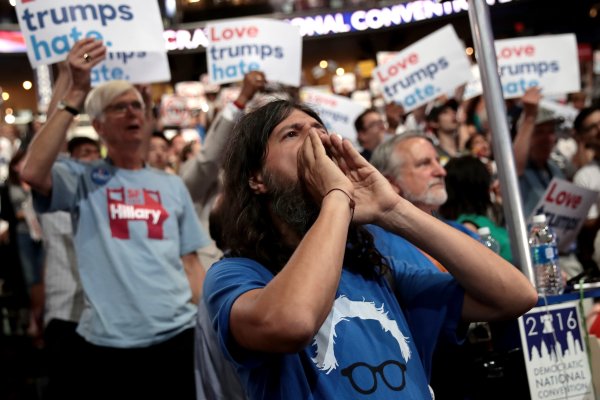 Meet the 'Bernie or Bust' Delegates at the Democratic Convention
Next Up: Editor's Pick