Almost as soon as the gavel echoed, ardent supporters of Vermont Sen. Bernie Sanders hijacked the opening moments of the Democratic National Convention in Philadelphia Monday, repeatedly booing mentions of Hillary Clinton, chanting Sanders’ name and turning what was supposed to be a celebration of party unity into an ugly family feud.

It was a disastrous start to a four-day televised event that was supposed to showcase Democratic unity. Inside the arena, Sanders supporters repeatedly disrupted the proceedings on stage, drowning out a series of black elected officials at the podium. Outside the arena, some Sanders supporters tried to block buses carrying delegates from entering the secured complex.

From the opening prayer, in which Rev. Dr. Cynthia Hale invoked Clinton’s name, almost every reference of the presumptive Democratic nominee’s drew boos from hundreds of vocal Sanders delegates and supporters. Some delegates borrowed a chant from last week’s Republican convention in Cleveland, shouting, “Lock her up!”

“I understand that Bernie wants Hillary to win,” says Benjamin Becker, a 32-year-old delegate from the San Francisco area. “I simply don’t care.”

The spectacle was a sign that Sanders, who likes to say that he is leading a “political revolution,” might have lost control over his movement. Former Sanders’ campaign manager Jeff Weaver told TIME that supporters had been asked to maintain decorum and not interrupt speeches.

The Sanders campaign sent a text message to delegate whips Monday afternoon, signed by the Senator, that asked them to observe decorum on the floor. “I ask you as a personal courtesy to me to not engage in any kind of protest on the floor. Its [sic] of utmost importance you explain this to your delegations.”

The supporters clearly didn’t get the message, or simply ignored it—they had booed Sanders himself earlier Monday when he encouraged them to back Clinton.

“He doesn’t want to be the one to tell us to boo Hillary,” says Mary Anne Cummings, a Sanders delegate from Illinois. “This wasn’t a cult of personality. People aren’t going to do things just because he says to do them.”

So Sanders’ supporters booed and jeered Clinton, while Democratic officials watched as any patina of party unity seemed to go by the wayside. If Democrats are to defeat Republican Donald Trump, they will need to muster far greater cooperation than was on display as the activists and insiders began their every-four-years summit.

Some supporters said they knew Sanders wanted them to behave themselves, but disregarded his plea.

“We are independent people. We’re working toward our goals, which are usually in line with Bernie,” says Benjamin Becker, 32, a delegate from San Francisco. “Bernie is a very admirable person, but he’s not always right.” Becker, who was among the throng of supporters chanting “Count our votes,” now plans to vote for Green Party candidate Jill Stein even if it means her candidacy could throw the election to Trump.

“We hear you. We respect you,” said Leticia Van de Putte, the co-chair of the powerful Rules Committee, trying to mollify dissent from the hall. Shortly after, former Denver Mayor Wellington Webb said of the two hopefuls: “They both deserve our cheers.”

The Sanders supporters wrestled some victories behind the scenes, winning concessions on the role of superdelegates and the party’s platform. They crowed about their wins, further energizing the supporters, some of whom waved their blue “Bernie” yard signs over their heads.

A series of speakers asked the Sanders contingent for respect, including Rep. Marcia Fudge of Ohio, the permanent chair of the convention. “This election is bigger than Hillary Clinton, bigger than Bernie Sanders. It’s bigger than all of us,” said Rep. Elijah Cummings, who helped write the party platform, as protesters held up signs against the Trans-Pacific Partnership trade deal.

Maine State Rep. Diane Russell, a Sanders delegate on the rules committee, was added to the schedule late Monday to speak in favor of the “unity proposal” to reform the party in line with Sanders’ wishes.

The chaotic scene on the floor marked the latest turn in 96 hours of tumult in Democratic politics.

The release of emails Friday showing Democratic Party officials appearing to shed their impartiality to boost Clinton reopened the slowly healing divisions within the DNC. By Sunday afternoon, Debbie Wasserman Schultz announced she was resigning and saw her convention role evaporated amid the controversy, announcing just hours before the convention gaveled in Monday that she would abandon her post as temporary chair of the convention to DNC Secretary and Baltimore Mayor Stephanie Rawlings-Blake. But her name hung around the neck of every delegate and guest: her name was printed on every credential.

In a statement released as the convention came to order, the new DNC leadership apologized to Sanders and his backers.

“On behalf of everyone at the DNC, we want to offer a deep and sincere apology to Senator Sanders, his supporters, and the entire Democratic Party for the inexcusable remarks made over email. These comments do not reflect the values of the DNC or our steadfast commitment to neutrality during the nominating process.”

Just Monday morning, Clinton campaign manager Robby Mook promised the show in Philadelphia would highlight “A very united Democratic Party.” The reality was anything but.

With reporting by Sam Frizell in Philadelphia.

Write to Alex Altman at alex_altman@timemagazine.com, Charlotte Alter at charlotte.alter@time.com and Philip Elliott at philip.elliott@time.com. 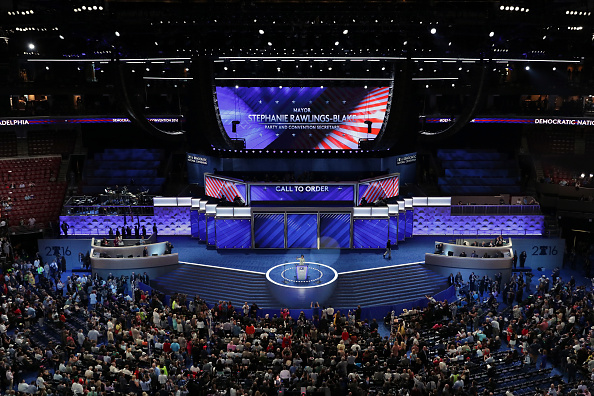 Watch Democrats Protest Clinton During the Convention Prayer
Next Up: Editor's Pick