Democrats had hoped that their national convention would go off without a hitch to contrast with the troubled Republican convention last week.

But the opening day of convention in Philadelphia had some problems of its own. For conventions, which are designed to be tightly scripted affairs, the day began on more than a few sour notes, though by the time primetime speakers Sen. Elizabeth Warren, First Lady Michelle Obama and Sen. Bernie Sanders took the stage, things had mostly gotten back on track.

Here’s a look at seven things that went wrong on day one:

The head of the Democratic Party resigned

At a Florida delegation breakfast, Schultz was also booed on live television as some people held up signs that read “E-MAILS,” a reference to emails Schultz and other party leaders sent during the primary that showed they were aligned against Sanders.

When Bernie Sanders told a crowd of his supporters Monday morning they needed to unify around Hillary Clinton, he was booed.

The convention opened with gavel troubles

Speakers were booed and heckled

As Democratic leaders began giving speeches, raucous Sanders supporters interrupted with various chants. Sanders tried to tamp down the protests to no avail.

But the protests even happened during the opening prayer.

“The DNC does not—and will not—tolerate disrespectful language exhibited toward our candidates,” the apology read. Donna Brazile, the incoming interim chair of the party, told CNN later in the day, “This apology is not just to Bernie Sanders.”

At least 40 people had reportedly been arrested outside the convention, more than the total number of people arrested during four days of the Republican convention in Cleveland. Large protests continued through the afternoon and evening in the areas surrounding the Wells Fargo Center where convention delegates gathered. 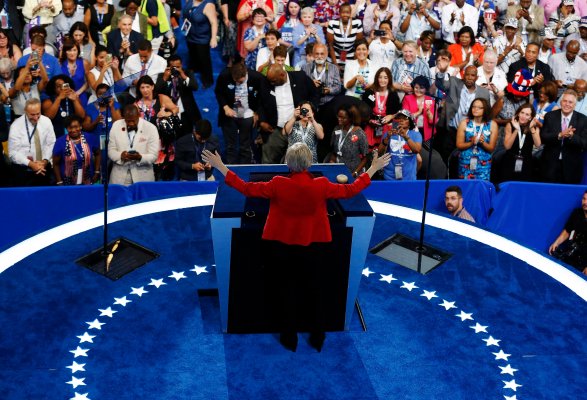 Elizabeth Warren: Reject Trump's 'America of Fear and Hate'
Next Up: Editor's Pick