A Texas cemetery that drew criticism for allegedly having a “whites only” policy and refusing to bury Latinos has conceded that its policy is discriminatory and unlawful.

A lawsuit was filed after Dorothy Barrera, who is white, realized she could not be buried at San Domingo Cemetery in Normanna, Texas, beside her husband of more than 40 years because her husband is Latino, the Texas Tribune reports. According to the lawsuit, cemetery operator Jimmy Bradford told Barrera that the Normanna Cemetery Association denied her request to bury her husband at the cemetery. When Barrera questioned this, Bradford allegedly said her husband could not be buried there “because he’s a Mexican.”

The Mexican American Legal Defense and Educational Fund has accepted the cemetery association’s “offer of judgment” proposing that a judge should enter a ruling against it for the whites only policy and declare the “rule of discriminating” based on race and national origin as void.

Segregated cemeteries have been illegal since 1948, and Texas law states that cemetery organizations may not adopt or enforce a rule that prohibits burials based on “race, color, or national origin of decedent.” 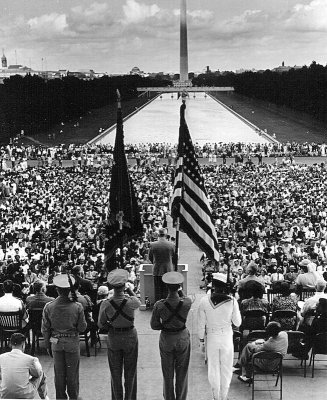 A Firsthand View of History at the NAACP Convention
Next Up: Editor's Pick