The Palace Theatre in London’s West End has seen many hits over the years, Les Miserables among them. But surely nothing can compare to the hysteria surrounding its latest tenant, the eighth installment of the Harry Potter saga, titled Harry Potter and the Cursed Child. Nine years after the final novel’s publication, J.K. Rowling’s most beloved characters are back in a two-part play created by Rowling, playwright Jack Thorne and director John Tiffany. Anticipation has been feverish around the world; tickets are as hard to catch as a Golden Snitch, and producer Sonia Friedman has compared the endeavor to opening a Star Wars movie in a single cinema. And yet there’s been little advance word on the ground since previews opened. Rowling and her acolytes have successfully convinced early viewers to keep silent about the play’s story. Call the auditorium a chamber of secrets.

The uncharitable might surmise that this was to cover up negative word of mouth. After all, the creative team faced the daunting challenge of honoring the expectations of fans who can measure their childhoods by the Harry Potter novels while also offering a fully rounded work of drama, instead of a theme park ride to be franchised around the world. But the truth is that they have succeeded on both fronts. This enchantment will turn even the most doubting Muggles into true believers.

The story picks up where Harry Potter and the Deathly Hallows left off. The middle-aged Harry and his wife Ginny are seeing their younger son Albus off from platform nine and three-quarters of King’s Cross Station, alongside married couple Ron and Hermione and their daughter Rose. But all is not well. Harry’s relationship with Albus is complicated. His son labors under the weight of his legacy and soon finds an unlikely soulmate in Scorpius Malfoy, himself struggling to shift a rumor that he is Lord Voldemort’s son.

The duo become a trio of outsiders with the arrival of the punkish Delphi, niece of an aging Amos Diggory. Amos is still grieving for his son Cedric, who lost his life competing with Harry in the infamous Triwizard tournament portrayed in Harry Potter and the Goblet of Fire. It’s the elder Diggory’s desire to rewrite history that sets in motion a chain of events that will spin the Wizarding World back into darkness.

Cynics have suggested the decision to split the play into two parts rather than one smacks of commercial exploitation, echoing the way the final book was broken in two on screen. But Cursed Child could only be told over the five hours that splitting it into two allows. It’s a fiendishly complex narrative, and moves at a lick; the first two years of Albus’s time at Hogwarts are told in the first fifteen minutes. Considering each of the books covers the course of a single year, this marks a radical change of approach.

While many Potter fans might have preferred a new movie or a book, this is a story that feels made for the stage. Yes, it’s packed with effects as characters cast spells, fly and even transform, achieved through old school stagecraft rather than digital trickery. But Thorne and Tiffany also conjure up moments of intimate drama; it’s telling that the biggest gasp in Part One came not from a twist of the plot or a moment of magic but during a blazing argument between Harry and Albus where the father firmly crosses a line. In these scenes between father and son, Jamie Parker as Harry captures a sort of tortured celebrity anxiety, suggesting his concerns about Albus’s shortcomings are in part driven by ego, and in part an orphan’s struggle to connect with his child.

Hermione and Ron (Noma Dumezweni and Paul Thornley) are afforded more opportunities by the narrative to have fun, and garner some of the biggest laughs of the plays. But Cursed Child is really about the next generation, and it’s the younger cast that steal the show, especially Sam Clemmett as Albus and Anthony Boyle as Scorpius. The self-described pair of “losers” are recognizably human and distinct from their family traits; Clemmett captures the frustration of the delicate and troubled Albus, and Boyle is both hilarious and heartbreaking as his bumbling, devoted friend Scorpius, whose blond thatch is the only sign of his Malfoy heritage. Boyle’s scenes with father Draco, portrayed by Alex Price as a swaggering cockney, mirror those between Albus and Harry, and build to their own moving conclusion. Just as Rowling’s novels captured some of the challenges and joys of growing up, this story is about the bond between parents and their children—appropriate, perhaps, now that the novels’ original readers are themselves becoming parents. By the time it ends, the mystery in its title—just who is the cursed child?—has some surprising answers, and suggests that the inevitability of pain is itself a curse we all must bear.

One legacy of the Potter books is the way they turned a whole generation on to reading. Cursed Child will perform this same service for theatre, as Potter-mad millennials pack the stalls. For that alone it deserves the unending run it will surely now receive. 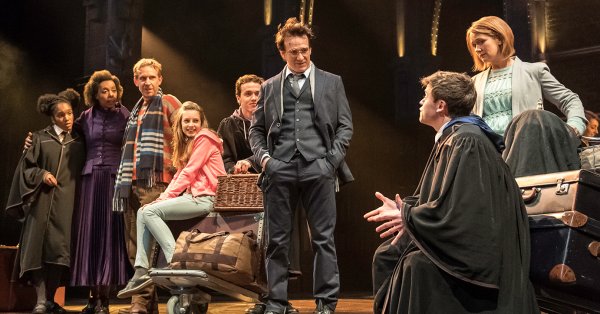 Meet the Cast of Harry Potter and the Cursed Child
Next Up: Editor's Pick